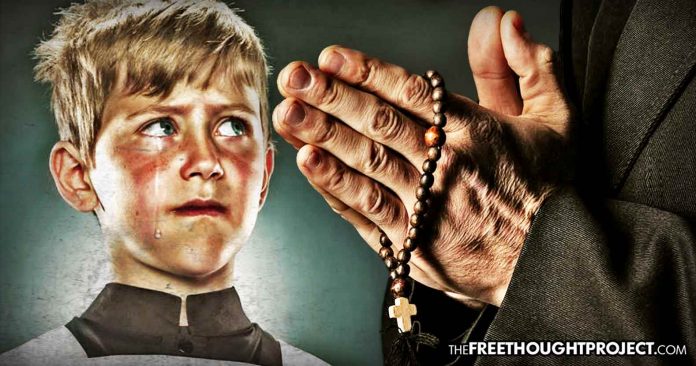 Pittsburgh, PA – As a scathing grand jury report reveals that hundreds of Catholic priests in the state of Pennsylvania sexually abused young children, a portion focuses specifically on Pittsburgh where nearly 100 priests are accused of running a pedophile ring where they helped each other prey on helpless children with no oversight.

The report claims that at least 99 priests in the Pittsburgh Diocese were involved in the pedophile ring—nine of whom were not named—and they received help from local officials who refused to explore investigations into the abuse because it was considered “bad publicity” for the Catholic Church.

The priests are accused of working together in a predatory ring that was ongoing for years in which they “manufactured child pornography, shared intelligence on victims and gave large gold crosses to certain boys to mark them as already being ‘groomed,’ for abuse,” according to a report from Penn Live.

The accusations have been around for decades, and one of the earliest reports dates back to 1964 when a child attempted to report the horrific abuse he endured at the hands of a priest in his church, and former Beaver County District Attorney Robert Masters shut down the investigation and insisted that the church needed to handle it from within.

The church did handle it—by simply sending the accused pedophile, Father Ernest Paone, to a different diocese where he continued in his career and was later given direct access to young boys again. The accusations from 1964 were not the first time Paone had been called out either, and the report from Penn Live claimed that “church officials had extensive knowledge of Paone’s sexual conduct with children as early as 1962 and questions about his ‘emotional and physical health’ as early as the 1950s when he was in seminary.”

Unfortunately, Paone’s story is not unique, and the Catholic Church has a disturbing history of looking the other way and blindly reassigning pedophile priests who had been accused of sexually abusing children and choosing to continue to give them access to vulnerable children.

The latest grand jury report looks at six of the eight Catholic dioceses in the state of Pennsylvania, and it accuses more than 300 priests of engaging in sexually abusing children. That number does not even begin to cover the hundreds of other priests and church leaders who helped to cover up the abuse, in the name of “protecting” the Catholic Church’s image.

The report lists more than 1,000 victims, which is a low estimate, as there are likely thousands of victims whose pleas for help were never heard or were blatantly ignored by people in power. As the New York Times noted, the horrific abuse carried out by the priests was shown in a number of forms that affected both young boys and girls:

“The report, which covered six of the state’s eight Catholic dioceses and found more than 1,000 identifiable victims, is the broadest examination yet by a government agency in the United States of child sexual abuse in the Catholic Church. The report said there are likely thousands more victims whose records were lost or who were too afraid to come forward. It catalogs horrific instances of abuse: a priest who raped a young girl in the hospital after she had her tonsils out; a victim tied up and whipped with leather straps by a priest; and another priest who was allowed to stay in ministry after impregnating a young girl and arranging for her to have an abortion.”

While the Catholic Church has since attempted to claim that the cases were isolated incidents, the report from Penn Live revealed that as many as 100 priests in Pittsburgh worked together and helped each other prey on young children. Early accusations of the pedophile ring occurred in the 1970s when a boy claimed he was introduced to a group of priests who told him to remove his clothes so that they could take photos of him and add those to their collection.

In addition to manufacturing child pornography, the priests have also been accused of using signals to show one another which boys had already been victims of sexual abuse and would be easy targets. The report claimed that they did this by gifting the victims with special gold cross necklaces.

The details of abuse are horrific but as uncomfortable as it makes many members of the public when they hear about the rampant abuse that has been ongoing for decades, it was that much worse for the helpless victims who had their innocence stripped from them and were ridiculed by their elders if they attempted to seek out help. This latest grand jury report serves as a semblance of hope that a small percentage of the victims may finally receive some form of justice.