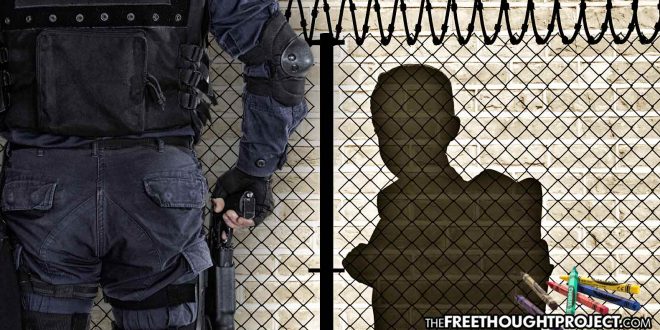 Honolulu, HI — In yet another instance highlighting the problem of police in schools, another child has fallen victim to the school to prison pipeline. This time, it was a 10-year-old girl who was handcuffed, arrested, and jailed for drawing a picture that offended a parent of a student at the school.

The American Civil Liberties Union of Hawaii has filed a lawsuit this week against the Honolulu Police Department, the state Department of Education and the state attorney general’s office over the incident.

According to the lawsuit as detailed in a letter, they are asking these agencies to adopt policy changes, expunge the child’s records, and pay $500,000 in damages for the “harm and suffering” caused by such an egregious arrest and treatment of a child.

The incident unfolded in January 2020 when a parent reportedly called Honowai Elementary School to complain about a drawing made by the child, identified as “N.B.” in the lawsuit. The parent demanded the school involve police in the situation.

The school obliged and the police were dispatched to handle a 10-year-old girl who drew a picture. When police arrived, they questioned the girl before handcuffing her, placing her under arrest, and hauling her down to the police station. She was 10 and drew a picture.

During the entire debacle, according to the lawsuit, the child’s mother, Tamara Taylor was not notified that her child was even in trouble, much less being hauled off to jail in handcuffs.

When Taylor went to the school, she was then falsely imprisoned herself, after school staff and police locked her in a room. She was not allowed to see her daughter or informed that the girl was “handcuffed in front of staff and her peers, placed into a squad car and taken away.”

“I was stripped of my rights as a parent and my daughter was stripped of her right to protection and representation as a minor. There was no understanding of diversity, African-American culture and the history of police involvement with African-American youth. My daughter and I are traumatized from these events and I’m disheartened to know that this day will live with my daughter forever,” Taylor said in a statement shared by the ACLU on her behalf.

ACLU Hawaii director, Wookie Kim told Hawaii Public Radio that there are much better ways at dealing with such an incident.

“There’s an instinct… of calling the police first rather than trying other alternatives beforehand. In particular, one of the demands that we are making of the Department of Education is that school officials consult with the school counselor before calling the police. Unless of course there’s an emergency situation where someone is imminently threatened with serious harm and that simply wasn’t the case here,” Kim said.

Highlighting the insanity behind this incident is the fact that the girl was not the one who even gave the drawing to the child. She was reportedly bullied by the child and decided to craft a drawing — of which the contents remains unknown — and decided not to give it to the student.

Instead, the girl’s peers colored on and added to the drawing before snatching it out of N.B.’s hand and delivering it to her alleged bully, according to the lawsuit.

The girl said “she did not want the drawing delivered but one of the other students snatched it from her hands and delivered it anyways,” the ACLU said in the letter. The school could’ve easily called in both parents and had a meeting with the children to resolve the incident but they chose the police state instead.

Sadly, this is a recurring trend in the land of the free. During the 2017-2018 school year, over 229,470 students were referred to law enforcement agencies or arrested, according to the US Department of Education Office for Civil Rights. This has been the case for years, as TFTP previously reported, in California alone, schools call the police every 2.6 seconds.

If you want to see the horrifying reality of many of these interactions, simply take a scroll through our archives at this link.