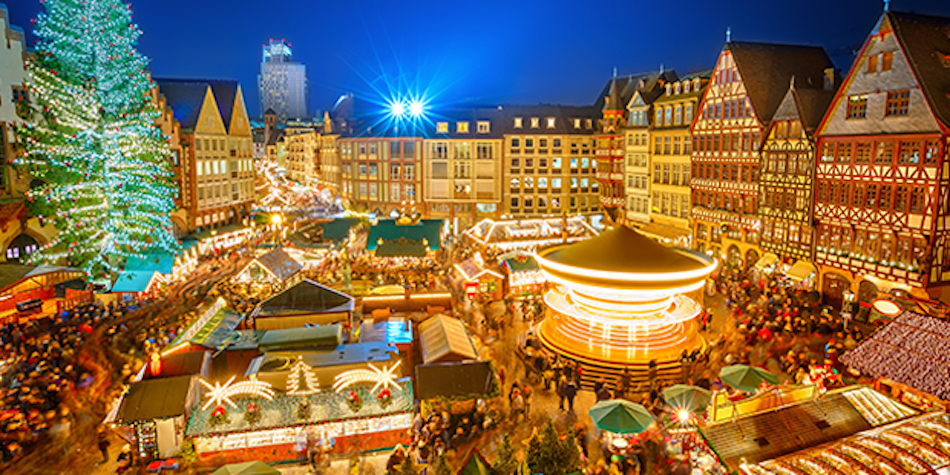 On the second day of Christmas, the only things stirring in some apartments in Frankfurt, Germany, were some Muslim refugees, the German cops smashing through the door and the chemicals in their kitchen bomb labs which they had been plotting to use to commit mass murder a year before 9/11.

It was the year 2000. And Muslim terrorism was far from unknown, but still a little bit exotic.

While the Algerian terrorists did not prove very cooperative, their home videos were very evocative, especially a shaky video videotape taken by Salim Boukari at the Christmas market in Strasbourg, France.

“This cathedral is Allah’s enemy,” the Algerian Muslim refugee narrated as he watched the cheerful shoppers outside the Strasbourg Cathedral.

“These are the enemies of Allah. They dance and are happy. You will go to hell, Allah willing.”

As the home of the European Parliament and, around this time of year, the “Capital of Christmas” with lavish displays marketing to tourists from around the world, Strasbourg was a natural target.

The massive Al Qaeda terror plot in Strasbourg targeting the cathedral, Christmas market, possibly a synagogue and European Parliament building would have brought together Muslims from Spain, Germany and the UK in a grandiose plot that might have included the use of nerve gas and bombs.

Instead the Muslim refugee terror plot was broken up.

Boukari, who had tried to claim political asylum in the UK, had his conversation with Abu Doha, the terrorist mastermind and another refugee, intercepted.

Aeurobui Beandali, the bomb builder, was another refugee who had come to Germany as a minor, applied for asylum, and committed thefts and assaults. Despite a deportation order, he stayed in Germany and began selling drugs, carrying out robberies and then made it out to terrorist training camps in Afghanistan. He then used that training to work on a pressure cooker bomb.

At the trial, Lamine Maroni, a Muslim refugee who had applied for political asylum, quoted the Koran, declared that non-Muslim were dirt, accused everyone in the courtroom of being Jews, and refused a lawyer because, “Allah will defend me.”

Allah didn’t do a great job. But he didn’t have to. It was a European court, so the terrorists were only sentenced to between 10 and 12 years in prison. That was well below the legal maximum of 15 years. Maroni got 11. Boukari, who mocked the judges, got 12.

That means they’ve been free men for a while.

Abu Doha, the mastermind of the attack, had a special hatred for Christmas. The United States had been looking for him over the LAX bomb plot on New Year’s Eve. But Doha was another Muslim refugee who had applied for political asylum in the UK in the 90s. And his lawyer claimed that he couldn’t get a fair trial in America. When last we heard from him, he was in the UK under house arrest.

While the Strasbourg Cathedral bomb plot, as it came to be known, faded from memory, the threat never went away. It just fell to a new generation of Muslim terrorists to carry it out.

“This cathedral is Allah’s enemy,” a Muslim refugee had declared in Strasbourg in 2000. “You will go to hell, Allah willing.”

On December 11, Cherif Chekkat, a Moroccan Muslim terrorist, opened fire at the Christmas market in Strasbourg. As bullets cut through the shoppers, he cried, “Allahu Akbar”.

Cherif Chekkat’s story echoes his Jihadist predecessors who had plotted mass murder in the same place. Like them, he was a criminal who turned to terrorism. Despite a reported 27 convictions for theft and assault, he remained on the loose.

On the morning of the attack, he was due to be arrested for attempted murder.

Like his Jihadist predecessors, Chekat had operated and been arrested in Germany. And had been deported last year from Germany to France.

But Chekkat was very different from the members of the Frankfurt cell, whose work he had completed, in one disturbing way. While they were mostly refugees who had migrated to Europe, he was born there. In the time between the original Strasbourg Cathedral bomb plot and the latest attack, a generation of homegrown Islamic Jihadis had been born and bred on European soil.

Chekkat and the 12,000 Islamists on the terror watch list are the new generation of Islamic terror. Despite the watch list and the Christmas market security zone, he was able to carry out his attack.

In 2016, the Kindergarten bomber, a 12-year-old Iraqi boy, had planted a nail bomb in the Christmas market in the German city of Ludwigshafen.

That same year, a North Africa Muslim refugee drove a truck into the Berlin Christmas market killing 12 and injuring 56 until it came to a halt on a trial of blood with its back wheel resting against a market stand boasting of the “magic of Christmas”.

And then there were the alleged failed Christmas bomb plots in the UK and Belgium. A total of 29 lone wolves were busted in Christmas terror plots in the UK, Australia, Brussels and France.

One of those plots was centered once again on Strasbourg with the arrests coming five days before the opening of its famed Christmas market. The seven arrests were announced in Strasbourg and Marseille preventing, what was described as, “a long-planned terror attack.”

Four of the arrests were made in Strasbourg.

One of the arrested men had worked for the Strasbourg government on “special events”.

The plot has been largely kept secret by French authorities, but was allegedly, “an action envisaged by the Strasbourg group for the first of December.”

Potential targets might have included the Christmas market on the Champs-Élysées, rather than in Strasbourg.

That same year, 7 Muslim settlers from Strasbourg were convicted of having gone off to join ISIS. The 7 were part of a group of 10. Of those 10, 2 were killed in the fighting in the region.

One man, Foued Mohamed-Aggad, came home, slipped past the authorities, and helped kill 90 people in France in the Bataclan attack.

After the long trail of Islamic terrorism leading out of Strasbourg, it was inevitable that a Muslim terrorist would strike in the French city and finish what the Frankfurt cell had started in 2000.

Death and terror had been deferred at the Christmas market for eighteen years.

And then Cherif Chekkat, one of the numberless North African Muslims crowding France’s terror lists, slipped past the security zone and opened fire, killing tourists in the “Capital of Christmas”.

The attack was inevitable.

Individual Islamic terror plots can be prevented, as had happened twice in Strasbourg, but the sheer momentum of Islamic terror is a relentless force whose motivating power is the Islamic population.

You can no more stop Islamic terrorism than you can stop crime or end poverty. But, unlike crime and poverty, Islamic terrorism is not a human condition. It is an Islamic condition. It is inevitable in Islamic countries and in those countries that choose to maintain Islamic populations with their infrastructure of Jihadist mosques and Islamist organizations interlinked with counterparts in their mother countries.

After the 2016 plot, Strasbourg’s Christmas market was sealed off. Pedestrians approaching the market were searched in security zones. It might have been enough. But it wasn’t.

Cherif Chekkat got through with a knife and a gun. He shouted, “Allahu Akbar” and began to kill.

Strasbourg Mayor Roland Ries told a TV station that, “life must go on.”

It’s a familiar refrain in the cities targeted by terror.

And life will go on. Until the next attack. And the one after that. Until everyone learns the lessons of Strasbourg and the shadow of Islamic terror no longer hangs over the “Capital of Christmas.”