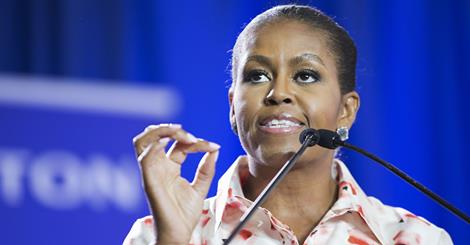 (The Olive) Isn’t it funny how queen Michelle can use foul language during a public event and the media swoons over it? Liberal champion Michelle Obama during an event she was speaking at as part of her book tour had a little slip of the tongue. Michelle in critiquing Facebook COO Sheryl Sandberg’s book, “Lean In: Women, Work and the Will to Lead,” said:

“And it’s not always enough to lean in, because that s— doesn’t work all the time.” (source)

Obama as a liberal has liberal privilege, she can say and do what she wants and the media will cozy up to her and make light of it.

Vanity Fair devoted two paragraphs to Michelle’s slip of the tongue and moved on, no big deal, nothing to see here.

““And it’s not always enough to lean in, because that s*** doesn’t work all the time,’” she said of making equality and respect work. Twitter users reported the statement with shock and love.”

A twitter user said about the evening with Michelle: “my life has been forever changed”

Are these people for real? Michelle Obama swears and it’s the greatest event in life; and gosh, could you please be president? Oh please – lets get real here.

Remember when President Donald Trump supposedly swore during a cabinet meeting? The press came unglued pouncing on this supposed event like Trump had shot and killed a member of his cabinet while on live TV. A Google search of this momentous event returns nearly 17 million results!

President Trump was almost roasted alive by the media and others for supposedly using a swear word – because he is president, he is no longer allowed to be human. The Obamas on the other hand and all other libs can make a simple mistake and the media bends over backwards to condone it and even celebrate it.

The over-weaning eagerness with which the media and the left in this country will attack and destroy Trump while ignoring the mistakes, lies, and outright crimes of those on the Left is not only disgusting and unfair, it is also a very slanted pack of lies and misrepresentations pushed onto the American people as truth.

Since 2013, Christian news magazine The Olive Branch Report has featured the insightful writing and reporting of Greg Holt. His writing has been featured on American Prophet, Conservative Firing Line, DC Clothesline, Godfather Politics, Capitol Hill Outsider, Sons of Liberty Media, Rev. Austin Miles, and others. Greg is also the Publisher and Editor of Inspirational Christian Blogs