That bald-headed b*tch set me up.

The real story is much bigger than that.

I received a 30-day all-exclusive suspension for posting an article which outed Gonzalez as a professional actress (below).

I thought a little repackaging might help get the story out because it has been seemingly buried forever. This is how it’s done. When something big breaks, and it doesn’t fit the mainstream narrative, they find a way to bury it.

Emma Gonzalez is a professional actress.

If she’s an actress that just happened to be a real Parkland student (doubtful but possible) that’s fine.

If she’s a crisis actor that has been fooling hundreds of millions of people, it’s not fine.

The below article went almost instantly viral on Facebook with over 23,000 shares in less than 48 hours. I’m not sure what will happen if you try to share the original post now. It garnered me a suspension.

To make things a little more complex, Fellowship of the Minds, the original source of the article, was permanently shut down by WordPress.

With that, many of their files and photos were destroyed.

One of the screenshots is likely lost forever, as well as one comparison shot. I found the most pertinent side-by-side shot but I’m not sure I am placing it in the proper spot in the article. Anyway I replaced their screenshot with my own and am doing my best to put the story back into its original format.

On its website, Now Casting Inc. describes itself as “a premier online casting database used by industry professionals all over the globe,” which provides “services for the entire entertainment industry” and has “sent hundreds of thousands of auditions to casting directors, network executives, studio executives, producers”.

The website’s services include:

If you click “actors,” you’ll be taken to an “Actor Search” page, which says:

There are 361006 actors currently in our Now Casting database. All of them can be found with a name search. Please note they are still filling in their resume and other information. As that is completed, the more detailed searches will return a better result.

To find an actor, just type in his or her name in the box.

A reader of FOTM, Brian H., did just that, and found an actor named Emma Jane Gonzalez. I replicated what Brian did by typing “Emma” (first name) and “Gonzalez” (last name), which brought me to this page.

Below is a screenshot I took of the page, in case the website takes down Gonzalez’s entry. I painted the red arrow pointing to the date (3/22/2018) and time (7:22 AM) when I took the screenshot.

Editor’s note: Original Screenshot lost but luckily Emma Gonzalez’ page is still up, so here is a replacement: 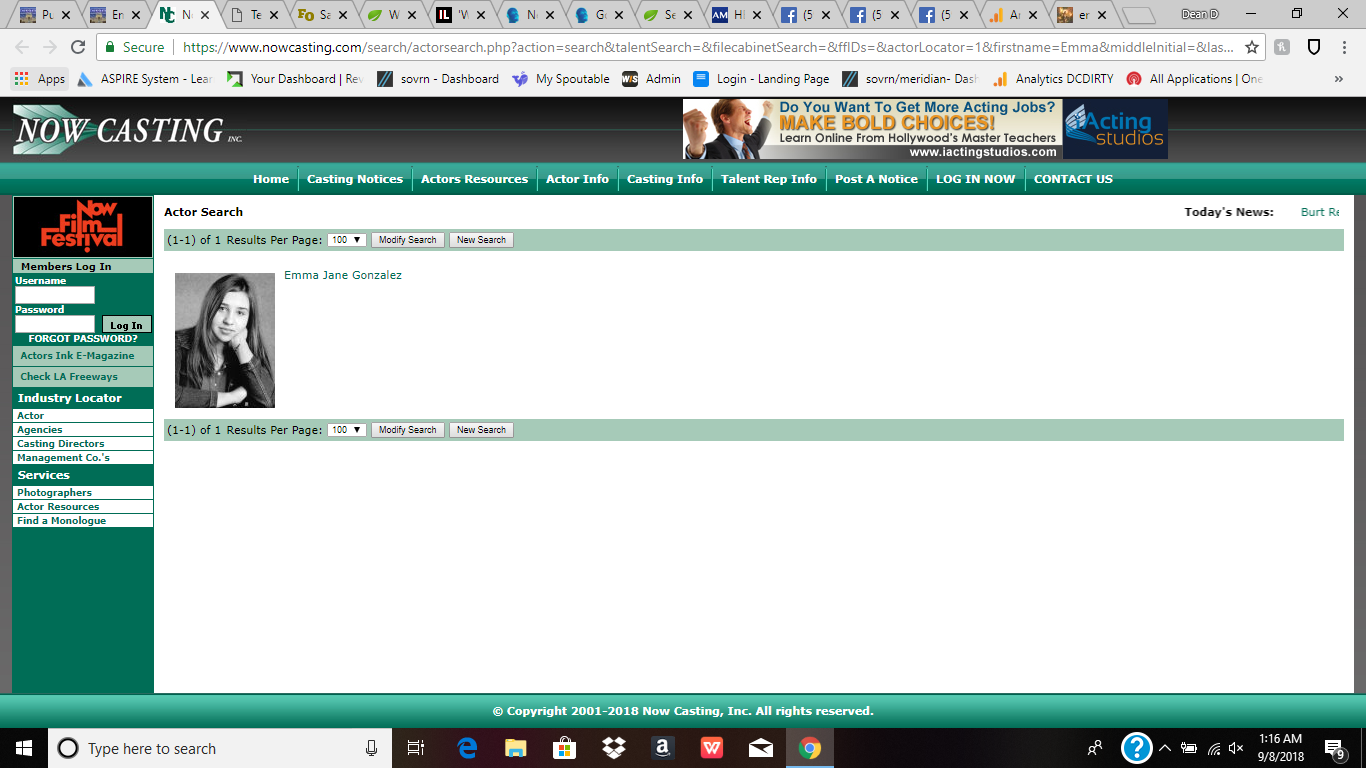 I had written about actress Emma Jane Gonzalez before in “The curious case of Parkland school shooting student survivor Emma Gonzalez“, that:

For comparison, I then posted these side-by-side pics of Parkland student Emma Gonzalez and actress Emma Jane Gonzalez. Editor’s note: This pic was lost with the FOTM shutdown.

From the above side-by-side pics, my conclusion then was that the two women are not the same person, mainly because Emma Jane Gonzalez appears to have longer ear lobes, and a weak chin.

The pic of Emma Jane Gonzalez on Now Casting, however, casts doubt on my previous conclusion.

Let’s compare Emma Jane Gonzalez on Now Casting with Emma Gonzalez of Parkland, FL: Editor’s Note: Luckily I was able to retrieve this one. I saved it in my own database for use as a “featured image.” 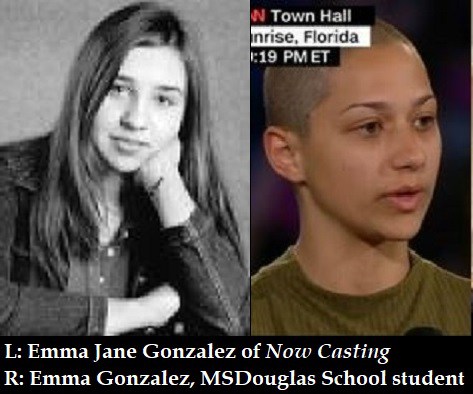 The previous pics of Gonzalez from the “Eat Our Feelings” video were in 2014, some four years ago. The Emma Jane Gonzalez of 2014 had a weak chin (aka “chinless wonder”), whereas the Emma Jane Gonzalez on Now Casting has a pointy chin like Parkland Emma Gonzalez. My guess is that sometime in the past 4 years, Emma Jane Gonzalez had a cosmetic surgery on her chin — a chin implant — just like Chelsea Clinton.

We can not prove Emma Gonzalez is a crisis actor or that the Parkland shooting is a false flag, but revelations like this one certainly lead to greater suspicion.

Emma Gonzalez is a professional actress and I would not doubt it if David Hogg is as well.

Articles like the above are why there is a huge push to label us “fake news” and silence us. The people’s media is in trouble.

The truth is dangerous to the establishment and they intend to squash alternative sites, like this one, like bugs.

All we can do is keep flapping our wings and buzzing in hope we can make a difference while we are still here.

Please share the hell out of this because I’d like my next suspension to be worth it.

If I can get enough truth out, I don’t care what they do to me.

And even if they silence me for good, someone will take my place and get even louder.

We aren’t going away. We will get louder and louder because the truth must win in the end.