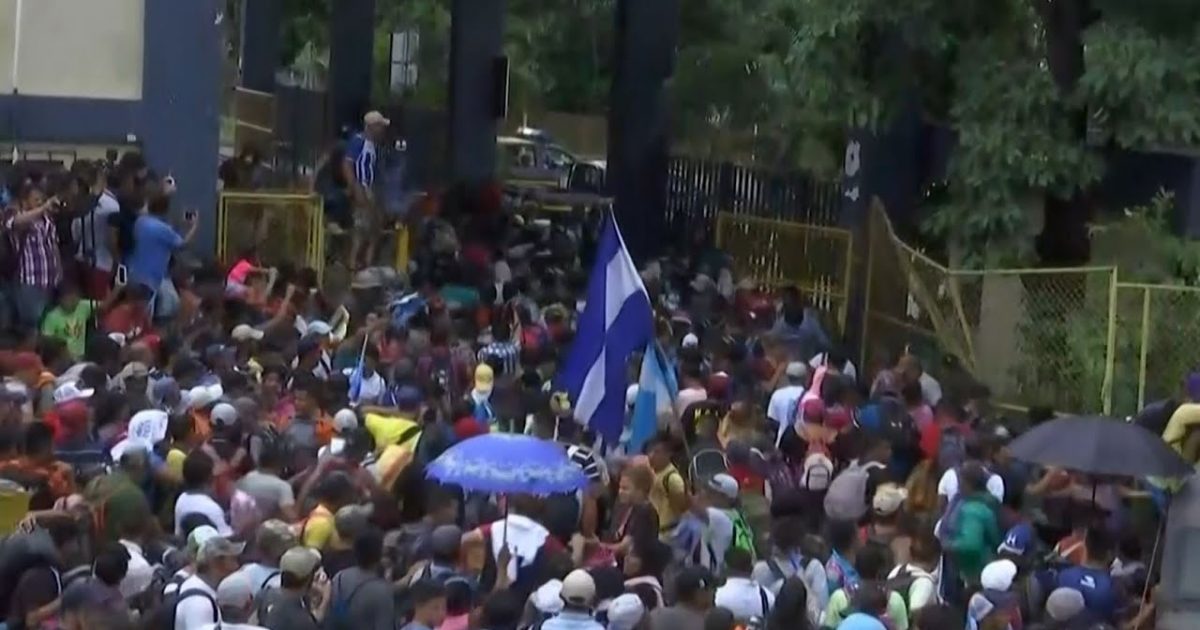 A “caravan” of at least 20,000 migrants has left Honduras and is on its way to the US southern border, according to Mexico News Daily. Our border authorities are so overwhelmed that they’ve had to release thousands of illegals into the United States. With more on the way, President Trump is ready to close the border.

On Twitter, the President stated:
The DEMOCRATS have given us the weakest immigration laws anywhere in the World. Mexico has the strongest, & they make more than $100 Billion a year on the U.S. Therefore, CONGRESS MUST CHANGE OUR WEAK IMMIGRATION LAWS NOW, & Mexico must stop illegals from entering the U.S …
through their country and our Southern Border. Mexico has for many years made a fortune off of the U.S., far greater than Border Costs. If Mexico doesn’t immediately stop ALL illegal immigration coming into the United States through our Southern Border, I will be CLOSING…
the Border, or large sections of the Border, next week. This would be so easy for Mexico to do, but they just take our money and “talk.” Besides, we lose so much money with them, especially when you add in drug trafficking etc.), that the Border closing would be a good thing!

March is already on pace to arrest over 100,000 illegals. As of this week, the CBP has 12,000 illegals in custody. There are not enough agents, not enough room in the CBP facilities, and with thousands more on the way, the crisis has already occurred. Yet Democrats refuse to take care of the problem.

“That breaking point has arrived this week at our border. CBP is facing an unprecedented humanitarian and border security crisis all along our Southwest border.” U.S. Customs and Border Protection Commissioner Kevin McAlleenan

CBP tweeted:
“#CBP saw the highest total of apprehensions and encounters in over a decade on Monday, with 4,000 migrants either apprehended or encountered at ports of entry in a single day. Yesterday, that record was broken again—4,117 in a single day.”

“Last month, more than 76,000 migrants were detained, marking the highest number of apprehensions in 12 years. That figure includes more than 7,000 unaccompanied children. More than 36,000 migrant families have arrived in the El Paso region in fiscal 2019 with about 2,000 at the same time last year, according to CBP data. The influx has prompted new challenges for Border Patrol agents.

And according to new data, the number of adults crossing the border illegally with children has surged. During the first four months of the year, CBP apprehended more than 136,000 migrants made up of adults and children who crossed illegally, marking a new record.” According to Fox News

The Democrat narrative, as well as that of the mainstream media, is that these people are all just “poor people” running to escape the violence of Honduras, Guatemala, and El Salvador. And they must not be a threat to US security. But the facts say otherwise. Now everyone in these caravans is just some poor lost soul that needs to escape bad conditions. There are many other factors at play- the main one of which is the backers of all these caravans telling lies to those in them. It is their plan to continue to overwhelm the border officials.

Democrats: admitting the existence of a crisis?

But there’s no crisis, say the Democrats. Nothing to see here. Yet they are quick to condemn migrant families being held in a parking lot because there is no room for them. No room anywhere. Are they admitting there’s a crisis? We think they are!

This is El Paso right now, where hundreds of migrant families are being held in the parking lot of a Border Patrol station because there is no room for them inside, or anywhere else. pic.twitter.com/lFGZ9zRcZk

Rep Ilhan Omar said it was caused by “white nationalism,” according to the Gateway Pundit. How about lax immigration laws? No – name calling is more important.

This is abhorrent and inhumane.

It's without a doubt a reflection of what white nationalism is doing to our country. As a country, we have to acknowledge that this is how people are being treated here and decide that we are better and we must do better. https://t.co/5YNAJFNZo7

AOC demanded to abolish ICE, stop the “backers of hate.”

Look at this picture.

Democrats truthfully can’t see the forest for the trees. They can’t see that the problem needs to be stopped with a wall and immigration reform. They think – wrongly- that it’s always someone else’s fault and if you just remove the immigration authorities, everything will be all better. Pink fairies and blue unicorns are real in their world. The alternative to that thought is that they are actively promoting the destruction of the country. Go ahead, Mr President. Close that border!