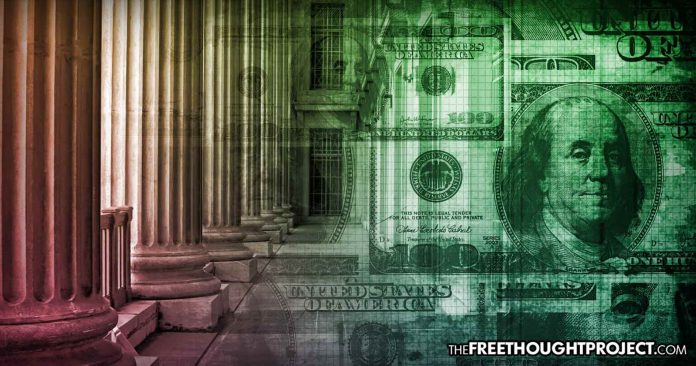 When I first started out as an independent journalist in 2007, I remember interviewing a congressional candidate who put his law career on hold to seek public office. Through my naive and hopeful eyes, before the interview, I looked from afar and wondered what may have inspired him to serve the public. Was it to reform corruption, stop the wholesale fleecing of the citizens of Louisiana by their criminal government, or was he standing up for a noble cause?

Turns out, I was wrong on all fronts. When I asked him why he chose to run for congress, his answer back to me—knowing that this was going to go on record—was “I thought I could win.”

There was no desire to right any wrongs—no desire to seek positive change and create a better life. The entire impetus behind his campaign was due to the the notion that he thought he could win. I thought to myself at the time that surely this man was an anomaly and most other politicians must be motivated by some selfless concern for the well-being of others, otherwise known as altruism. But I was dead wrong.

The anomaly is actually the reverse. The politician who seeks office for personal gain is the rule, not the exception. Self-interested narcissists fill the halls of Washington stomping on anyone who gets in their way and unafraid to lie, cheat, and steal to get there. The politician who risks their career to stand for what they believe in and to serve the people, however, is the actual anomaly.

Our politicians, they tell us, commit themselves to a life of government so they can serve their constituents and represent them at a national level to further the democratic process and uphold our rights. Promises of lower taxes, free stuff, more freedom, and more security flow from the mouths of political candidates like treated water from a sewage plant. But it’s the exact same story once they all get elected—sell out to lobbyists and push more war.

The opportunity of public office has become such a position of power and control people are paying billions of dollars just for a crack at landing their candidate a job in D.C. In fact, according to a report this week, the cost of the 2018 was the most expensive midterm election in history.

As OpenSecrets.org reported, with more than $5.7 billion shelled out by candidates, parties, committees, PACs and outside groups, the 2018 midterm leapfrogs even the then-record breaking 2008 presidential election which saw nearly $5.3 billion in total spending. It also smashes the previous midterm spending record of $3.8 billion in 2014.

“Just as the 2018 elections brought historic wins for a more diverse group of candidates, they also saw greater spending than we’ve ever seen or anticipated for a midterm election, capitalizing on years of loosened campaign finance regulation and oversight,” said Sheila Krumholz, executive director of the Center for Responsive Politics.

It would be irresponsible reporting not to mention that a little less than 17 percent of this money came from individuals in the form of small donations. But this likely has more to do with candidates getting better at appealing to emotion than it does with any grassroots movements affecting real change.

The following chart shows just how much money people continue to pour into the opportunity to sell you out to special interests.

If you think that people are spending record amounts of money just to have the opportunity to act as or support a public servant, think again. The election process has morphed into a circus in which billionaires vie for your attention through their shill candidates or shill candidates vie for your attention through their appeals to emotion. All of it is a charade to get into power and if voting actually accomplished anything resembling real change, it would likely be illegal.

Even if you vote, or not, and your party wins, or not, because this system is set up this way, the police state will continue. Constantly voting for the lesser of two evils has manifested into an inevitable cycle in which the government gets more powerful and the people get poorer. But don’t take my word for it, just look at the current state of America.

50 percent of all American workers make less than $30,533 a year. In the meantime, however, the politically connected elite made up of the 0.1% have increased their wealth by more than $1 trillion in the past year. One trillion also happens to be the same amount of money that the US taxpayer has had placed on their backs in the form of government debt in the last year too. Coincidence? Probably not.

“But if the republicans keep the house we will make America great,” right? Or, “if the dems take the house, we can finally have nice things,” right? Wrong. The reality of the situation is that no matter who gets elected, these politicians have already made a Faustian bargain to keep the police and warfare state in power.

In today’s political climate, it is no longer a question of which party is in power, or which party will usher in totalitarianism. Instead, we have reached a point of simply waiting for the hammer to finally fall.

Donald Trump ran on a platform to make government smaller, get America out of these endless wars, cease the chaotic and out of control spending, and rein in the overreaching executive. Instead, he’s continued wars, increased spending, and followed in his predecessor’s footsteps in using his position of president to write executive order after executive order—most recently threatening to alter the very Constitution with one.

We’re not only speeding toward the edge of a perilous cliff, but arguing over who should steer the wheel — leaving no one competent enough available to man the brakes.

Any politician who attempts to apply the proverbial brakes is laughed out of Congress, pushed to the fringes, and never sees the light of day in the mainstream media unless it is to smear them. Case in point, Justin Amash and Tulsi Gabbard.

The ruling elite have no problem flaunting this in front of our faces either. In fact, one Congressman even spoke out in a book, bragging about how voting doesn’t matter and that the US government views the citizens as “sheep.”

In 2016, the internet exploded when the book Congressman X was published. In it, the supposed current or former congressman explained that voting is what keeps assholes like him in power.

“My main job is to keep my job, to get reelected,” Congressman X asserts in the book. “It takes precedence over everything.”

In regard to how the political class views the citizens, Congressman X did not hold back.

“Voters are incredibly ignorant and know little about our form of government and how it works,” he says. “It’s far easier than you think to manipulate a nation of naive, self-absorbed sheep who crave instant gratification.”

This craving for ignorance is why these politicians and their supporters are spending billions on your attention. If they keep you distracted long enough to take power, they have won.

We have got to wake up to this system of fraud and extortion that we call government before they have taken all we have left. We need to stop being tricked by the slick tongued snakes in suits with red and blue ties when promising us golden unicorns.

We need to reclaim our rights as humans before they are legislated out of existence for our perceived safety. And, we need to never be silenced for calling out this corruption because once we reach critical mass, true change will be on the horizon. No army can stop an idea whose time has come.