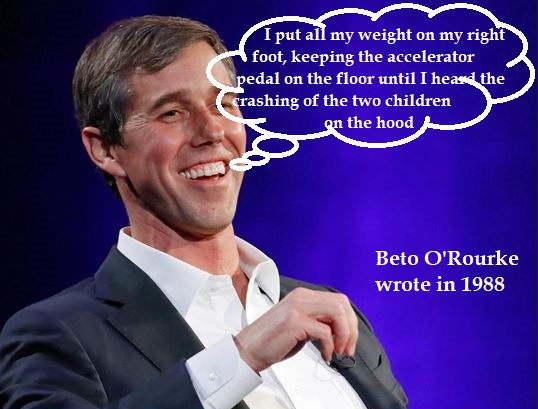 In a 1988 essay titled “Visions from the Last Crusade,” O’Rourke described his fantasy of killing 38 children with a car. He wrote:

The catacombs of my head produce the most wonderful dreams and visions. I feel that I am one with my intellect and my soul. It was during these dreams and visions that I concocted a notion. It started as something small at first, but after every dream it grew stronger, until the urge had become too great. No longer could this strong desire in my mind be suppressed. Recognizing this fact, my one and only goal in life became the termination of everything that was free and loving….

This feeling pervaded everything in my life, yet the first few months after realizing my goal, I had done nothing. Then one day, as I was driving home from work, I noticed two children crossing the street. They were happy, happy to be free from their troubles. I knew, however, that this happiness and sense of freedom were much too overwhelming for them. This happiness was mine by right. I had earned it in my dreams. As I neared the young ones, I put all my weight on my right foot, keeping the accelerator pedal on the floor until I heard the crashing of the two children on the hood, and then the sharp cry of pain from one of the two. I was so fascinated for a moment, that when after I had stopped my vehicle, I just sat in a daze, sweet visions filling my head….

It was simply ecstasy. As I drove home, I envisioned myself committing more of these “acts of love”, and after a while, I had no trouble carrying them out.

The more people I killed, the longer my dreams were. I soon quit my job, and stayed at my house in an almost comatose state. My dreams grew longer and more vivid. They kept me alive and proved to be the only thing to live for. I had killed nearly 38 people by the time of my twenty-third birthday, and each one was more fulfilling than the last.