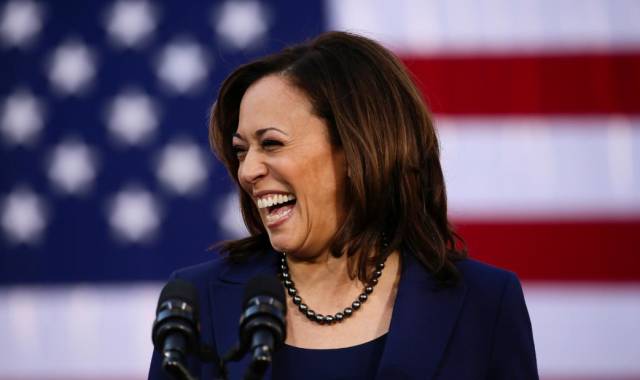 I just knew this would happen sooner or later.

Harris is neither a “natural born” U.S. citizen (defined as both parents being U.S. citizens at the time of her birth), nor she is an African American. Her mother is a Tamil Indian, who immigrated to the U.S. in 1960 from Madras, India (Madras was renamed Chennai in 1996); her father came to the U.S. in 1961 from Jamaica, to attend graduate study in economics at the University of California, Berkeley. (Wikipedia)

But facts never seem to deter the Left.

After jumping onto the bandwagon of Demonrat Alexandria Ocasio-Cortez’s economically-insane Green New Deal, Kamala Harris is determined to further destroy the U.S. economy with reparations for slavery. Never mind that, ruling out the contemporary scourge of sex trafficking and sex slaves:

Here’s the transcript (beginning at the 25:20 mark of the video):

Harris: “Well look, I think that we have got to address that again, it’s back to the inequities. There, through–look, America has a history of 200 years of slavery. We had Jim Crow. We had legal segregation in America for a very long time. The Voting Rights Act was only strong for 50 years and then they wiped it out with this United States Supreme Court in the Shelby decision, to the point that 22 states immediately thereafter put in place laws that one court found were crafted with surgical precision to have black people not be able to vote. So we’ve got to recognize, back to that earlier point, people aren’t starting out on the same base, in terms of their ability to succeed and so we have got to recognize that and give people a lift up. And, there are a number of ways to do it. Part of my initiative again around the ‘Lift Act’ is that same point–you lifting people up who are making less than a hundred thousand dollars a year. What I want to do about rent is the same thing. What we need to do around education and understanding disparities, what we need to do around HBCUs [historically black colleges and universities). But we have a history of racism in America.”

Charlamagne: “So you are for some type of reparations?”

The comments on the YouTube video, from blacks (the commenters’ gravatars), are fascinating. A sample:

Steven Blaq: “Black people ain’t accepting them butter biscuits without some quality chicken and a side of their choosing. You about to get Hillaried.”

662chillin: “Look at the dislikes on this video. Black #ADoS people are not falling for the okie doke like we did in 2008/2012 and finally getting on code. The days of #BenignNeglect and giving away our vote while helping these CBC members get rich with getting nothing in return are OVER”

Willie D Live: “You damn right we know you cannot be trusted. The criminal (in)justice system is deeply flawed because snakes like you uphold it. The little things you did were nothing more than bones thrown to gain brownie points. As your constituents looked the other way you locked up every brother you could find as your office simultaneously refused to investigate or indict corrupt police officers throughout California. You are a textbook status-quo politician, here to shuck and jive and do The Man’s bidding. Your record as DA in San Francisco, and as Attorney General of California was your audition for the oval office and you blew it like you blew a few other things. Wink, wink. You’re the worst kind of culture vulture because you prey on your people’s blind trust for those who look black. Your mama should be embarrassed and your daddy should’ve pulled out. No more talk!”

Lucifer Fire: “This chick is a pandering fraud. She thinks she can insult our intelligence by talking in circles without answering questions. We will no longer be fooled.”

bclaude87: “Between Kamala Harris and Cory Booker the Democratic party really thinks Black Americans are IDIOTS. We are not falling for the Barack Obama trick again. Lets hear real laws and policy that will result in Black Empowerment. I don’t want to hear People of Color, Minorities, Diversity, Poor People, or Urban. I am soooo tired of Black people fighting for EVERYONE else and we continue to be at the bottom and get shitted on. No Black AGENDA = No Black Vote. #Tangibles2020”