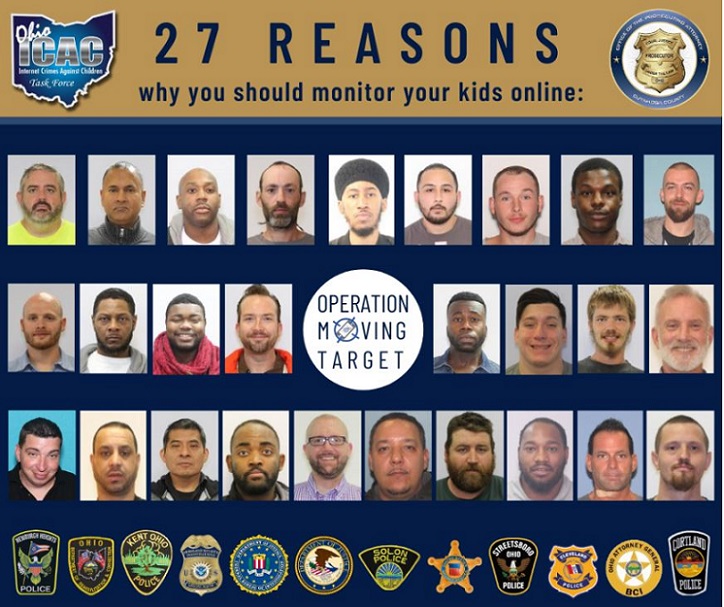 CLEVELAND – Cuyahoga County Prosecutor Michael C. O’Malley announced that 27 individuals were arrested as part of “Operation Moving Target,” an undercover operation led by the Ohio Internet Crimes Against Children (ICAC) Task Force. The four-day operation ran from Monday, August 24 to Thursday, August 27, 2020. The purpose of the operation was to identify and arrest individuals interested in engaging in sexual activity with whom they believed to be minor children.

“As we have seen the number of Cybertips dramatically increase this year, it is clear that online predators remain a serious threat to our children,” said Prosecutor O’Malley. “Hopefully the success of yet another operation serves as a stern warning to offenders that you will be found, you will be arrested, and you will be prosecuted.”

The defendants, ages 21 to 61-years-old, engaged in sexually explicit online conversations with undercover officers posing as children. Contact was initiated through popular social media applications. The defendants expressed an interest in engaging in sexual activity with the purported children and/or disseminated images of their genitals during these online conversations.

Following the conversations, the individuals traveled to a pre-arranged location, which was a vacant house in Cuyahoga County, to engage in sexual activity with purported children. Upon arriving, they were arrested by law enforcement officers and transported to the Cuyahoga County Jail. Several defendants were in possession of firearms, condoms, personal lubricant, sex toys, and drugs.

Initial charges were filed against the defendants that include: Attempted Unlawful Sexual Conduct with a Minor, Disseminating Matter Harmful to Juveniles, Importuning, and Possessing Criminal Tools. Each case will be presented to a Cuyahoga County grand jury.

The arrested individuals include:

The Ohio Internet Crimes Against Children Task Force is run under the direction of the Cuyahoga County Prosecutor’s Office and funded in part by a grant from the Department of Justice, Office of Juvenile Justice and Delinquency Prevention. The task force conducts proactive and reactive investigations dealing with the online exploitation of children and provides training and technical assistance to more than 365 local, state, and federal criminal justice affiliated agencies throughout the state of Ohio.

SOURCE – Cuyahoga County of the Prosecutor

We want to thank all the brave men and women who have dedicated their lives keeping America safe.