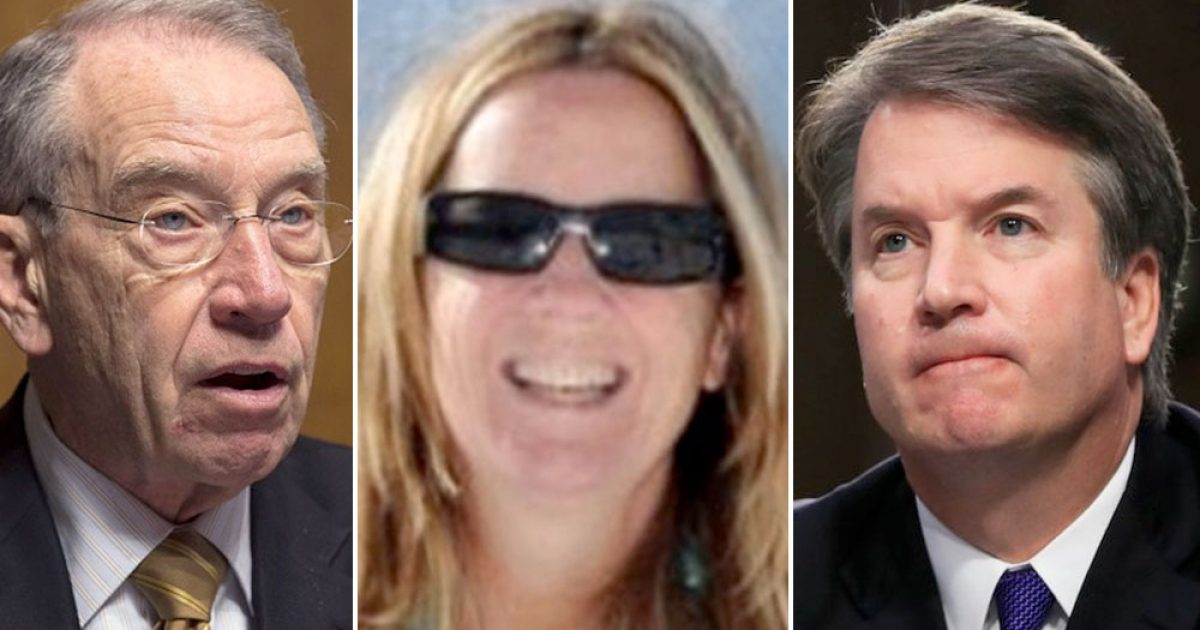 Dr. Christine Ford claims that aside from she and Judge Kavanaugh, there were three others present in the house on the day she was allegedly sexually assaulted. The first two, Mark Judge and Patrick Smyth, have denied any recollection of being there, via legally binding statements through their lawyers. On Saturday, it was learned that the third witness Ford has named, Leland Ingham Keyser, has no recollection of this either. In an email to the Senate Judiciary Committee, Keyser’s attorney Howard Walsh wrote:

“Simply put, Ms. Keyser does not know Mr. Kavanaugh and she has no recollection of ever being at a party or gathering where he was present, with, or without, Dr. Ford.”

Democrats want so badly for the allegations against Kavanaugh to be true. They are tying themselves into knots as they try to counter each new blow to their case.

She is planning to drive across the country. Ford doesn’t like airplanes, not so much because of her fear of flying, but because she is uncomfortable being in confined spaces where there is no exit available.

Ford’s friend, Kate Devarney, told CNN this week that: Ford’s fear of flying is directly related to her allegation of assault, and that an airplane is “the ultimate closed space where you cannot get away.”

This, she claims, stems from her alleged sexual assault at age fifteen when she felt she had no way out. She had been “detained” until Mark Judge jumped on top of Kavanaugh (who was on top of her) causing Judge and Kavanaugh to topple off the bed and start “scrapping” on the floor, which allowed her to “escape.” So, the Senate Judiciary Committee will just have to wait. She definitely won’t be able to make it to Washington by Monday. Even Wednesday looks dicey. Perhaps on Thursday.

PJ Media’s Matt Margolis weighed in on this issue:

“One could argue that “anxiety” could cover a fear of flying, but a fear of flying (or confined spaces in general) for 35 years seems like an incredibly debilitating phobia that seems likely to have been called out specifically prior to this new fear of flying claim. Has Ford, for example, been unable to ride in an elevator for 35 years? Assaults in elevators are certainly more common than assaults on airplanes. Further, Ford herself went to a private all-girls prep school. Her family must have been fairly well-to-do, and probably went on expensive vacations more than once during her teen years. If she suddenly developed a fear of flying because of the attack, are we expected to believe her family didn’t notice she suddenly couldn’t join them on a family vacation? Is it possible they never flew to go on vacation?”

Maybe that’s why she scrubbed her Facebook account. She may have posted photos of herself traveling to Europe or some other distant locale and would have to explain how she got there.

The Ford camp has gone to great lengths to avoid public scrutiny, even managing to delete her high school yearbooks from the internet. However, a journalist from a small blog called “Cult of the First Amendment,” saved them two days before they were scrubbed and they are heavily redacted but can be viewed here.

The deleted material does not implicate Ford personally. She is not shown engaging in any compromising behavior personally. However, the “wild times” of the girls from Holton-Arms is readily apparent. Take a look.

No jury of Ms. Ford’s peers, in any courtroom in America, would convict a defendant based on the story she has told which is probably why Sen. Feinstein used it as a last-ditch effort against Kavanaugh.

Ford’s identity was released one week ago and already, each of the three witnesses she has named, deny any recollection of being present. That means that of the five individuals she claims were present that day, she is the only one who has any recollection of being there. And her memory is faulty, at best. (I won’t bore you all with a recount of the holes in her story.)

She wants Kavanaugh to testify first which is contrary to the US legal process where the accused listens to the plaintiff’s allegations and then responds. Oh, and she doesn’t want any outside lawyers and Kavanaugh can’t be in the room when she testifies.

The defendant is always present during a criminal trial.

And Republicans, not wanting to appear insensitive to Ms. Ford in the age of #MeToo, keep on accommodating every irrational request.

It doesn’t appear that Ford plans on testifying. And although I might be wrong, I think it’s because she doesn’t want to perjure herself.

Enough is enough already. Democrats are trying to delay Kavanaugh’s confirmation until after the midterms because they think they have a chance to retake the Senate.

Prior to this case, that may have been a remote possibility. But this travesty has captured Republican’s (and Independent’s) attention. It has galvanized the base and that will only increase with each new provocation. This will boost voter turnout and hopefully, close the pre-accusation “enthusiasm” gap.