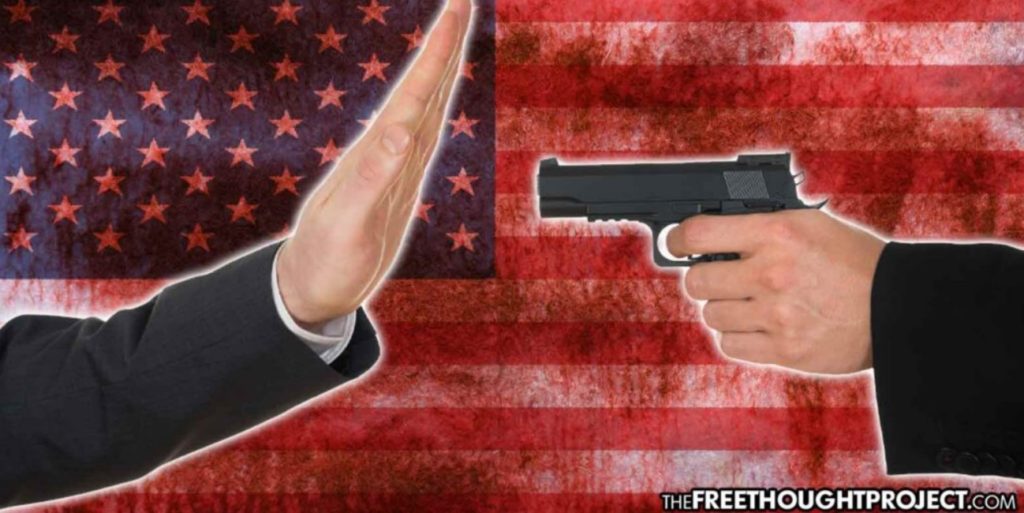 May of 2022 was a tragically bloody month that will forever be burned into the memories of Americans. In Uvalde, Texas and Buffalo, New York, two different psychopath cowards sought out unarmed children and adults and slaughtered them in cold blood.

Instead of trying to understand what causes someone to want to harm innocent people, the state responded with reactionary measures to limit the rights of law-abiding citizens. New York led the way with tyrannical bills that outlawed passive resistance to bullets with a body armor ban. The feds then followed suit with a bipartisan bill to remove due process with a national red flag law.

As TFTP has reported at length, red flag laws do little to prevent mass shootings and a lot to trample the rights of law-abiding citizens.

Citizens who are targeted by these laws are deemed guilty first and only after their guns are taken, will they have a chance to defend themselves in court. This is de facto removal of due process.

In spite of what officials and the fact checkers claim, when a person is stripped of their constitutional rights, albeit temporarily, without being given the chance to make their own case based on what can be entirely arbitrary accusations, this is the removal of due process. It doesn’t work and it is rife for abuse as there is no way to stop an estranged spouse from calling police repeatedly and telling them their ex is threatening to cause harm to themselves or others.

What’s more, as we’ve pointed out, red flag laws do not stop mass-murdering psychopaths from obtaining weapons and causing harm.

While guns certainly play a role in these horrifying murders they are only part of the issue and gun control laws which target law-abiding citizens will do nothing to stop mass-murdering psychopaths from causing grave harm. If the government was truly interested in saving lives and preventing further tragedies like Uvalde, they would look into what causes a person to do such horrible acts.

Because the state’s reactionary nature is highly ineffective, the Free Thought Project has come up with a list of three potential solutions to preventing mass shootings that doesn’t include disarming or trampling the rights of law-abiding citizens.

1. Stop idolizing the shooters in the media

Mass murderers in America are all too often immortalized by the media. They have their photos plastered on televisions across the country and names burned into the pages of American history forever with the blood of the innocent.

If the shooter fits one of the many divisive narratives, they get even more notoriety in the corporate press as the controversy drives traffic to websites, thereby increasing revenue and creating profit from murder.

As TFTP has previously pointed out, a 2017 study found that the “contagion” effect of copycat mass shooters is a real thing and usually occurs roughly 7 to 13 days after the original shooting. According to the study:

In instances of mass shootings, the media appear largely responsible for providing the model to imitate. Although there are a variety of strategies that could function in tandem to alter the likelihood of a mass shooting, changing the way the media report mass shootings is one important step in preventing and reducing imitation of these acts. Furthermore, it is likely that media-prompted imitation extends beyond mass shootings. A media effect has been shown with suicide, is implied in mass shootings, and may play a role in other extreme events such as home-grown terrorism and racially motivated crimes.

We watched this unfold after the Buffalo shooting.

This study was published five years ago and the World Health Organization and others have since recommended the media follow certain guidelines to prevent further contagious mass death. TFTP adopted the policy of not naming mass shooters nor publishing their images after Parkland. However, as we’ve seen with the recent killings, the legacy media are choosing to abstain from these recommendations and the effects were visible for weeks.

2. Fund research into what makes a person want to cause mass harm to innocent people

While the right calls for hardening schools and the left calls for disarming Americans, neither side is proposing research into preventing a person from wanting to carryout such horrifying violence.

Nevertheless, billions of taxpayer dollars flow into the mental health industry’s coffers, and most mental health issues go untreated as the country’s mental health problem gets worse. Hundreds of billions of tax dollars are making lots of industry insiders and big pharma players rich, yet we’re nowhere close to figuring out what triggers these lunatics to carry out such horrors.

The state is far more concerned with reactionary measures because they are easy to use to win elections. It is high time we look deeper than the two talking points offered up by politicians every time a tragedy like this happens.

3. Come to terms that America is a nation that is rooted in, celebrates, and glorifies violence

Governments kill a lot of people, plain and simple. And throughout history most of the worst atrocities were carried out by the state against unarmed populations.

As a point of reference, in the 20th Century alone, governments were responsible for 260,000,000 deaths worldwide. That number is greater than all deaths from illicit drug use, STDs, homicides, and traffic accidents — combined.

Yet still, Americans cannot see the elephant in the room.

This desensitization to violence has fostered a mindset in the average American to view life as disposable. Through massive propaganda campaigns, the state and their corporate masters have waged a war of dehumanization, bolstering an unhealthy environment in which people see their political opponents as subhuman.

When someone who has been desensitized to violence and taught to dehumanize their perceived enemy their entire life suddenly acts out, everyone acts surprised. They send their thoughts and prayers, call for banning guns for a few days and then go right back to sleep, condoning state violence and wishing for the deaths of their political rivals once more.

The entire time, both sides blame the other for the violence while ignoring the fact that their own government is the largest purveyor of mass violence throughout all of American history.

We need only look at government-sponsored mass murder and the lack of accountability faced by the perpetrators to see the writing on the wall that causes this mass desensitization to violence.

If we look at countries in which the US has waged wars of aggression as the acts of murder they are, the US government is the deadliest mass shooter in recent history. Hundreds of thousands if not millions of innocent people have been exterminated in Vietnam, Iraq, Afghanistan, Syria, Somalia, and Yemen. Instead of holding the people who started these wars accountable — we name libraries and roads after them, build statues in town squares, and celebrate their birthdays.

We cannot be a nation ruled by mass murderers and act surprised when citizens act out in this way. While we certainly have a mental health problem in this country which needs to be addressed, until we stop condoning and celebrating state-sponsored mass murder and treat all life as sacred — no matter your political predispositions — we will continue to see the symptoms of this inherently sick society manifest over and over again.

The three proposed solutions above are by no means comprehensive and mass shootings are far more complex to wrap into a single article. There are still the issues of SSRIs, lockdowns which drove millions mad, and many other factors that could be contributing to these scenarios. That being said, we must begin focusing on these other conversations and get out of the rut of “ban guns” and “arm teachers,” as this has gotten us nowhere.

Instead of removing the means of self-defense for millions of Americans or turning schools into prisons, we need to have an honest conversation about all of these issues. Until we do, we can expect more of the same.