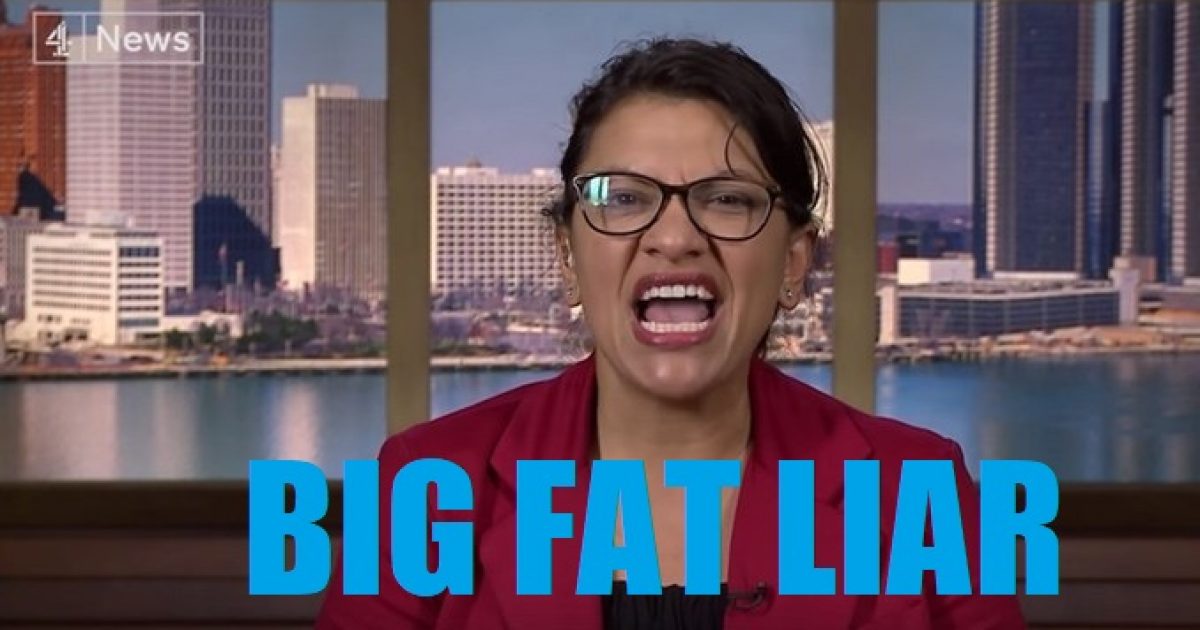 Terror-tied Rep. Rashida Tlaib (D-MI) now has sights set on her to remove her from office as a Congresswoman by over 320,000 people for providing what is alleged to be a fraudulent address in order to run for election in 2018.

According to the petition at Change.org:

RASHIDA TLAIB of Michigan was questionably elected to our house of representatives during the November 2018 primary election process. She lied about living in Detroit using her fathers house address .. she never lived there .. she lived in Dearborn ., her father has verified this .. .. if this is not the case os TLAIB Denies we would like proof of her residency in Detroit .. We also demand a full investigation and recount of every vote that she supposedly received .. we also demand a full list of all campaign contributions and who donated to her because she has publicly displayed affiliations with extremist organizations on her social media accounts .. her words and actions are unprofessional to say the least using profanity and hate filled rhetoric against our country our citizens and our president ..SHES THE ONE WHO SAID WE ARE GOING TO IMPEACH THIS MOT F€£KER REFERING TO OUR PRESIDENT .. she is unfit to serve in any capacity within our government because of her extreme bias .. the goal of this petition is to gather enough signatures to bring her actions against the United States into public view so that we may initiate an investigation into her background , and end her political career ..

Earlier this month, Ryan Saavedra of Daily Wire reported that even Tlaib’s father said she “lied big time” in order to run for Congress.

“Tlaib’s father, Harbi Elabed, made the accusations against Tlaib, who at the time was a freshman state-level representative from the 12th District in Detroit’s Southwest side,” wrote Saavedra. “The newspaper article was scrubbed from the internet when The Detroit News migrated to a new website but was available in a subscription-based digital archive.”

He said his daughter misrepresented her residency when she signed an election affidavit in 2008 with the Wayne County Clerk claiming she was a citizen of Detroit.

According to that affidavit, Tlaib claimed she lived at 9123 Rathbone in Detroit. That house is owned in part by her father, Harbi Elabed, and he now says she did not live there and he was only recently made aware that she had claimed so.

“She lied,” Elabed said. “She lied big-time to get elected. I never teach her that way. I teach her the right way. It’s my house. She didn’t live there. She lived in Dearborn in her house with her husband and boy.”

Here’s the March 11, 2010, report in The Detroit News pic.twitter.com/rFe5lH0iLt

Dearborn is not a part of the 12th House District that Tlaib was elected to represent.

Residency issues are very difficult to prove. To become a candidate, you must be a “registered and qualified elector” of that district, according to state law. That means you must have your primary residence — the address on your driver’s license and where you’re registered to vote — in that district.

There is no law however, according to state election officials, saying that a person must spend any particular number of days, weeks or months at a certain location. Perjury is an offense punishable by up to five years in prison and a $1,000 fine.

Tlaib even admitted at the time that accusations against her caused problems for her, saying: “People have questioned that a lot, but never my father and I’m sad about that. The point is I complied with the law. I moved into the district before I filed. Period.”

According to property and tax records, Tlaib lived in a house on Tireman in Dearborn that her husband purchased a decade ago. Taxes were paid on that house in 2009 with her husband claiming it as his primary residence.

But in 2008, as Tlaib was preparing for a run for the seat, she said she separated from her husband and moved into her father’s house with her two brothers.

Tlaib said she had bills to prove where she lived but it does not appear that she ever provided those bills to the newspaper to validate her claims.

Tlaib’s father said that he came forward with the allegation because it was part of a “growing litany of transgressions that his daughter committed upon him — culminating in a dispute about care of his aged mother, who suffers from dementia,” adding that Tlaib “sided against him and in favor of his nephew in a battle of custody, a complete breach of family values.”

“My sons told me blood is thicker than water and I should keep my mouth shut, so OK, I did,” Elabed said. “Then she crossed the line with her father. When she interferes in the father’s business, when she shows him no respect. This life in politics has changed her.”

Tlaib ended up reconciling with her husband and moved next door to her father.

“It’s not surprising that he did this to me. It’s not. He was abusive to me as a girl and he’s angry at me about my grandmother,” Tlaib claimed. “I know he’s proud of what I’ve accomplished but he’s also vindictive. It’s all very embarrassing. What do they say, you can’t choose your family?”

Well, I don’t think it was politics that changed her. There is no doubt this woman has serious issues that come from the Islamic religion, you know, the religion of pieces? Of course, her politics are not American politics. This is a woman sold out to America’s enemies as she parades around with some of the most anti-American groups you can imagine, and so does her family. No doubt, she got her anti-Americanism from her family.

Rashida Tlaib’s mother belongs to the Tlaib family from the Palestinian village of Beita in Samaria, known as a hotspot for terrorism.

The facts about the US congress woman closest family members and associates are truly alarming.

A former U.S. congressman from the state of Michigan said that Rashida Tlaib should undergo a lie detector test after we revealed that she illegally lied about her address to run for office, that she represented a state House district she did not live in, and that she lied about her address on her voter registration form. Her own father even called her out for lying.

“It appears the Democrats and some Republicans can’t run on their own merits,” stated former Michigan 11th District Republican congressman Kerry Bentiovlio. “Hook her up to a lie detector” before she gives her next speech, Bentiviolio said, referring to the Rashida Tlaib residency scandal.

“Then again, some voters like the sweet nothings whispered in their ears,” Bentivolio remarked.

Forget a lie detector. Those are inadmissible in court. We need documents and a strong attorney to bring criminal charges against her for election fraud.

Howley has also presented evidence that proves the following: