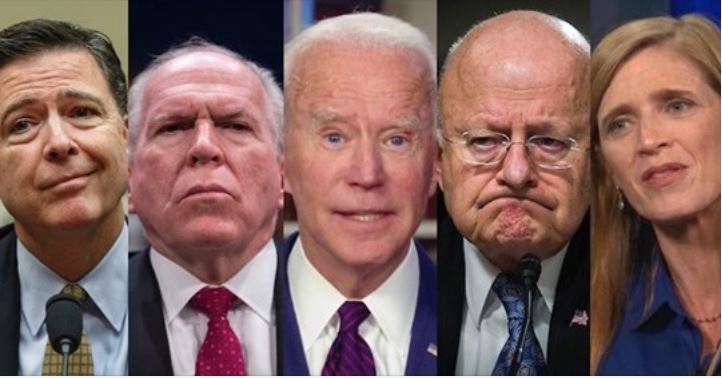 Things aren’t looking good for the presumptive Democratic nominee for President because he’s on The List.

The names of over three-dozen high-ranking Obama administration officials have been named as individuals who may have received General Michael Flynn’s “unmasked” identity in response to a request that was made between the day of the 2016 election and January 31, 2017.

Last week, Acting DNI Rick Grenell declassified the list of individuals and delivered it to the DOJ. It was then unclear if the list would be made public. The DOJ said that they had no intention of releasing the names. DNI Grenell then sent The List to Senator Grassley(R-IA) and Senator Ron Johnson(R-WI), who then released it to the public.

Grenell appeared to have delivered those files to the DOJ last week. The declassified list showed recipients who “may have received Lt. Gen Flynn’s identity in response to a request processed between 8 November 2016 and 31 January 2017 to unmask an identity that had been generically referred to in an NSA foreign intelligence report,” the document, obtained by Fox News, read.

“Each individual was an authorized recipient of the original report and the unmasking was approved through NSA’s standard process, which includes a review of the justification for the request,” the document said. “Only certain personnel are authorized to submit unmasking requests into the NSA system. In this case, 16 authorized individuals requested unmasking for [REDACTED] different NSA intelligence reports for select identified principals.” The document added: “While the principals are identified below, we cannot confirm hey saw the unmasked information. This response does not include any requests outside of the specified time-frame.”

This comes at a really, really bad time as it was just yesterday morning that Democrat Hack Turned Serious Journalist™ George Stephanopoulos asked Sleepy Joe about this very thing and he flip-flopped on his response on live television.

“I know nothing about those moves [by the FBI] to investigate Michael Flynn,” Joe Biden claimed.

Reminded he was in a January 5, 2017, Oval Office meeting with President Obama and the FBI Director about investigating Flynn, Biden admits “I was aware… but that’s all I know.” pic.twitter.com/SImLNoqhd7

Senator Rand Paul (R-KY) is on an absolute tear after the list was released:

“Unmasking involves revealing the identity of an American’s private phone conversations without a constitutional warrant.” pic.twitter.com/eRUUViCXE1

Get ready, folks! Durham is still conducting his investigation, and this thing ain’t over yet!