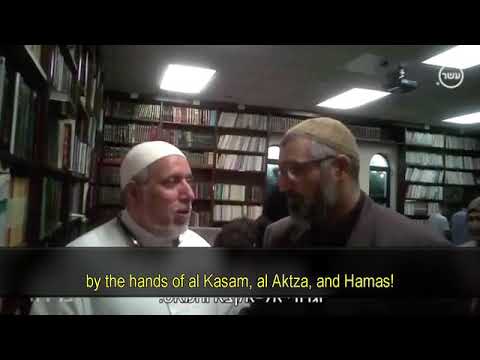 Not hard to believe when you consider the level of infiltration by terror-tied Muslim Brotherhood groups like CAIR, ISNA, MAS, MSA, et al etc.

Designate the Muslim Brotherhood a terror group and we can purge these monsters.

Since 2007, federal government agencies have handed over $47 million to 61 Islamic institutions in the forms of 411 various grants and contracts.

In total, if the government’s own data is accurate, at least $41 million was given to institutions either controlled or under the partial influence of the Muslim Brotherhood, Jamaat-e-Islami (a violent South Asian Islamist movement), Salafis, Deobandis (a hardline South Asian Sunni sect from which the Taliban was created) and the Iranian regime, among others.

Some of the largest amounts involve grants to aid charities. Long favoredby Islamist movements as a means to spread ideology through welfare, charities also provide extremists with plentiful funding and the occasional accompanying credibility of government partnership.

The Islamic Circle of North America (ICNA), for instance, received over $10 million from the Federal Emergency Management Agency for disaster relief work in 2016 and 2018. ICNA is the U.S. representative body of Jamaat-e-Islami, which was recently banned by the Indian government in the Kashmir region because of its involvement with “extremism and militancy in Jammu and Kashmir and elsewhere.”

ICNA and its subsidiaries openly partner with official Jamaat-e-Islami organizations in Pakistan, such as Al Khidmat Foundation, a funder of the designated terrorist organization Hamas. The Investigative Project on Terrorism has noted that Al Khidmat’s President, Naeem ur-Rehman, is closely involvedwith the designated Kashmiri jihadist group Hizbul Mujahideen.

In addition, ICNA runs an international aid branch, Helping Hand for Relief and Development, which has openly partnered in Pakistan with Lashkar-e-Taiba, a designated terrorist organization responsible for the deadly 2008 Mumbai attacks.

Another Jamaat-e-Islami charity, Muslim Aid, received over $1.5 million from the American taxpayer in 2013 for a “Food for Peace” program. Muslim Aid is based in Britain, but operates a fundraising office in America.

In 2010, three years before the U.S. government handed over taxpayers’ money to the charity, Muslim Aid admitted to funding organizations controlled by the terrorist organization Hamas, including a grant of over $18,000 to the al-Ihsan Charitable Society — which is designated by the U.S. government as a sponsor of terrorism. In 2013, the same year as the U.S. government grant, a war crimes tribunal sentenced to deathin absentia the founder of Muslim Aid, Chowdhury Mueen-Uddin, for his part in the mass murder of teachers and intellectuals by Jamaat-e-Islami killing squads during Bangladesh’s 1971 Liberation War.

Other Islamist strains, meanwhile, also found generous taxpayer backing. For example, $115,000 of taxpayers’ money was handed to a Bin Laden-linked Sudanese charity, the Islamic Relief Agency, a decade after the U.S. Treasury designated it as a terrorist-financing organization. Lawmakers are now investigating the decision to award the grant.

Three organizations named by the United Arab Emirates as terrorist groups were approved for U.S. government funding. Islamic Relief, a global charitable franchise established by supporters and officials of the Egyptian Muslim Brotherhood, received over $1.6 million, despite its extensively documented links to Hamas and other designated terrorist organizations.

These enormous sums to aid charities somewhat inflate the total figures. But the hundreds of remaining grants are not insignificant. Branches of the Council on American-Islamic Relations (CAIR) and the Muslim American Society (MAS) collectively received over $310,000 from the taxpayer. Officials of both organizations (as well as CAIR itself) were named by federal prosecutors as unindicted coconspirators during the 2008 Holy Land Foundation terror financing trial.

Funds for CAIR and MAS were provided under a diverse range of government initiatives: Counter-terrorism security measures, disaster relief, chaplaincy programs, and school lunch vouchers. In fact, if large grants to aid charities are disregarded, chaplaincy contracts and schooling subsidies make up a significant proportion of government funding.

The Islamic Institute of Knowledge (IIOK), for example, is a Shiite institution in Dearborn, Michigan, which has received over $851,000 under the National School Lunch Program. IIOK does not hide its ideological links. It was established by Abdel Latif Berry, a disciple of Lebanon’s late Ayatollah Fadlallah, who served as a “spiritual advisor” to the designated terrorist group Hezbollah. In 2009, IIOK held a commemoration for Ayatollah Khomeini — the architect of the Iranian Revolution and its theocratic regime — at which Latif Berry spokeand praised Khomeini effusively.

Other lunch money recipients include over $38,000 to the Tarbiyah Islamic School of Delaware. In 2015 the Muslim journalist Asra Nomani revealed that the school was established by radical adherents of the hardline Deobandi sect. And another $31,000 was given to the Islamic Center of Passaic County, whose imam, Mohammad Qatanani, is accused by his mosque’s same governmental patrons of involvement with the terror group Hamas.

In other instances, the federal government has simply been in business with extremists. Between 2008 and 2010, the General Services Administration paid Dar Al Hijrah, a prominent mosque in Virginia, over half a million dollars for the lease of office buildings. A number of government agencies, however, have longconsidered Dar Al Hijrah a key terror hub. Its current imam, Shaker Elsayed, is an avowed supporter of Hamas.

The list goes on. In some instances, the data (which was gleaned from the government’s USASpending website) counts totals for some programs far below the amounts cited in a number of media reports, and so it is possible that the government’s data is incomplete, and that the real amounts are even larger. In addition, the figures do not include direct grants to Islamist institutions from state governments, a common occurrence in some parts of the country.

There are a number of possible, worrying conclusions to be drawn from these collated figures. First, it seems clear that government officials do not consider the ideological agendas of organizations to which they hand out taxpayers’ money, or the effect that such subsidies may have on ideologically fragmented Muslim communities. Second, as the generous grants to Islamic Relief and the ICNA network show, established funding or partnership with terrorist and extremist organizations has not precluded Islamist organizations from government patronage.

Third, funding to Islamist organizations has not been reduced under the Trump administration. In fact, it has increased: In 2018, 40 grants and contracts worth over $13 million were distributed to organizations controlled or influenced by radical movements; two years earlier, under Obama, only 35 grants worth a mere $3.6 million were handed out to radical-linked institutions.

Distressingly, one could be forgiven for glancing at these figures and concluding that Islamists control far too high a proportion of high-profile American Muslim institutions. Or, these figures could show that Islamists have become the preferred partner of government simply because Islamists are better organized, more savvy about the processes for acquiring government funding, and — in their perpetual efforts to acquire legitimacy — simply more motivated.

A bill currently before the Committee on Foreign Affairs, H. Res 160, seeks to end government funding to American proxies for the Jamaat-e-Islami Islamist network — including the Islamic Circle of North America and its subsidiary organizations. That is a welcome step, but there are many more Islamist strains to be tackled, and many more grants and contracts to be canceled.

In the fight against extremism and terror, the government could strike an immediate, enormous blow by urgently reviewing all this funding — curtailing taxpayers’ subsidization of international Islamist movements and identifying other moderate Muslim organizations with which to partner instead.

Courtesy of Sons of Liberty