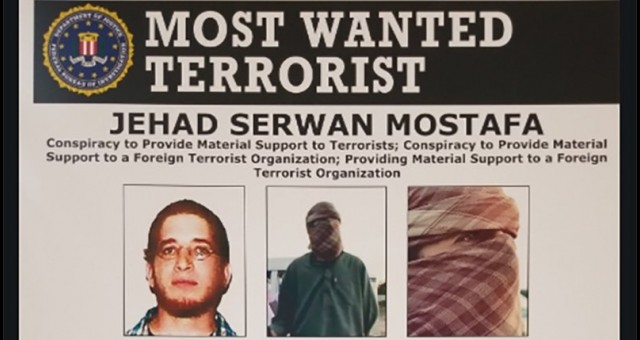 FBI SAC Scott Brunner announced during this afternoon's press conference "wanted terrorist Jehad Serwan Mostafa is currently believed to be in Somalia, the FBI is seeking the assistance of the public, both in the US and East Africa, in locating and apprehending Mostafa." #Wanted pic.twitter.com/nOcgtaS6s7

SAN DIEGO – An indictment was unsealed in federal court today charging Jehad Serwan Mostafa, a 37-old U.S. citizen and former San Diego resident who is on the FBI’s Most Wanted Terrorist List, with terrorism violations arising from his critical role in providing support to the militant Islamic terrorist organization, al-Shabaab.

The FBI is hunting for a former San Diego resident they believe is the highest ranking US citizen fighting w/ a Somalia based terrorist group, al-Shabaab. There is a reward of up to $5 million leading to the arrest of Jehad Serwan Mostafa. pic.twitter.com/0fTeA1UE9t

Mostafa, also known as “Ahmed Gurey,” “Ahmed,” “Anwar,” “Abu Anwar al Muhajir,” and “Abu Abdallah al Muhajir,” was originally charged in a three-count indictment in October 2009 with similar charges. The superseding indictment announced today expands the scope of the indictment alleging that Mostafa’s support of terrorist activities and al-Shabaab continued up to and including February 2017.

On March 20, 2013, the Department of State’s Reward for Justice Program offered a reward of up to $5 million dollars for information leading to the arrest and conviction of Mostafa. U.S. Attorney Robert Brewer said the United States unsealed the superseding indictment with hopes that Mostafa will be apprehended and brought to justice. “We believe this defendant is the highest-ranking U.S. citizen fighting overseas with a terrorist organization,” Brewer said. “Al-Shabaab’s reign of terror threatens U.S. national security, our international allies and innocent civilians. Today we seek the public’s assistance in capturing Mostafa and disrupting Al-Shabaab.”

Scott Brunner, the Special-Agent-In-Charge of the San Diego FBI, stated that Mostafa is currently believed to be in Somalia, and the FBI is seeking the assistance of the public, both in the United States and East Africa, in locating and apprehending Mostafa. SAC Brunner stated that the apprehension and prosecution of Mostafa will aid in disrupting al-Shabaab’s terrorist activities, which continue to threaten U.S. national security, our international allies, and innocent civilians, both U.S. and foreign citizens alike.

SAC Brunner stated that Mostafa was raised in the Serra Mesa area of San Diego and attended high school and college in San Diego. After graduating from college, in late 2005 at the age of 23, Mostafa departed San Diego, traveling first to Sana’a, Yemen, and then on to Somalia where he engaged in fighting against internationally supported Ethiopian forces. Mostafa eventually joined al-Shabaab, a terrorist group that the U.S. Department of State designated as a Foreign Terrorist Organization in 2008.

Al-Shabaab, meaning “The Youth” in Arabic, is a violent and brutal militia group that has used intimidation and violence to undermine the Somali government and the foreign military presence supporting it. The group seeks to control territory within Somalia in order to establish a society based on its rigid interpretation of Sharia law. In 2012, it pledged allegiance to the militant Islamist organization Al-Qaeda. Over time, al-Shabaab has engaged in external operations in neighboring countries in pursuit of global jihad. While its terrorist attacks have been concentrated in East Africa, it has claimed responsibility for attacks that resulted in injuries to Americans and/or had ties to San Diego: the 2010 Kampala, Uganda suicide bombing of a bar during a World Cup soccer match that killed a U.S. citizen working for a San Diego non-profit organization; and a 2013 attack on the Westgate shopping mall in Nairobi, Kenya that killed over 60 and injured U.S. citizens, including a graduate of Torrey Pines High School. Additionally, as recently as January 15, 2019, al-Shabaab executed a coordinated attack at the DusitD2 hotel in Nairobi, Kenya, where 16 innocent civilians were killed, including one U.S. citizen.

SAC Brunner stated that for over a decade, Mostafa has played a critical role in al-Shabaab, including in its media operations, training of soldiers, and participating in attacks on Somali government forces and African Union troops. Since 2009, Mostafa has held leadership positions with al-Shabaab, and today is believed to be the highest-ranking U.S. citizen fighting overseas with a terrorist organization. In 2011, Mostafa appeared at a press conference with an al-Shabaab leader, purporting to be an al-Qaeda emissary. SAC Brunner stated that the FBI assesses that this media stunt evidences his efforts to facilitate al-Shabaab’s relationship with other terrorist groups and role in external operations.

According to SAC Brunner, in 2019, the FBI became aware of Mostafa’s participation and leadership within al-Shabaab’s explosives department. Specifically, Mostafa has been implicated in the use of improvised explosive devices (IEDs) in attacks in Somalia and in improving their effectiveness as a tool of terror. Al-Shabaab has recently used IEDs against U.S. interests in Somalia. On September 30, 2019, al-Shabaab attacked the Baledogle U.S. military airbase in southern Somalia where U.S. soldiers are located to support Somali and African Union troops, and assaulted an Italian military convoy traveling in the Somali capital of Mogadishu. Al-Shabaab claimed responsibility for both attacks. Al-Shabaab is resolved to continue attacks on innocent civilians in Somalia and in the region, and has demonstrated it will go to great lengths to threaten the security of the United States and our partners.

SAC Brunner noted that the FBI believes Mostafa continues to play a critical role in planning operations directed against the Somali government and internationally supported African Union forces in Somalia and East Africa. As a result, Mostafa continues to pose a direct threat to U.S. forces, civilians and interests.

The public is reminded that a reward of up to $5 million dollars is being offered for information leading to the arrest and conviction of Mostafa. Anyone with information about Jehad Serwan Mostafa can report tips anonymously by phone at 1-800-CALL-FBI or online at “tips.fbi.gov” or can contact the nearest FBI office, American Embassy or Consulate.

We want to thank the brave men and women who have dedicated their lives to keeping America safe.