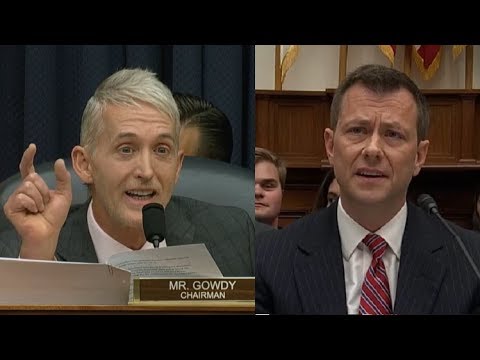 On Thursday, Peter Strzok finally received his well-deserved congressional grilling, and it was quite a chaotic affair. Over nearly ten hours, there were shouting matches between Strzok and congressional Republicans, there were shouting matches between Republicans and Democrats, and there were quite a few moments that none of us will ever forget. It was a joint hearing of the House Judiciary and Oversight Committees, and the meeting room was absolutely packed. More than 70 members of the House were in attendance, and many came ready with some very pointed questions. The following are five of the most controversial moments from Peter Strzok’s ten hour testimony to Congress…

“When you said you never crossed that bright, inviolable line, what you meant to say was except for 50,000 times, except for hundreds of times a day where I went back and forth, expressing my personal opinions about ‘f’ing’ Trump and stopping Trump and impeaching Trump on official FBI phones, on official FBI time,” said Rep. John Ratcliffe of Texas.

“Agent Strzok, are you starting to understand why some folks out there don’t believe a word you say?” he added.

#2 Trey Gowdy uses his extensive legal skills to absolutely grill Strzok about his contradictory statements… #1 Congressman Gohmert went where nobody else was willing to go when he asked Strzok “how many times did you look so innocent into your wife’s eye and lie to her about Lisa Page?” The following comes from CNN…

“I’ve talked to FBI agents around the country. You’ve embarrassed them; you’ve embarrassed yourself,” Gohmert said. “And I can’t help but wonder, when I see you looking there with a little smirk, how many times did you look so innocent into your wife’s eye and lie to her about Lisa Page?”

If it was virtually anyone else, I would feel very badly for them.

But if this is the worst that Strzok gets, then he will be getting off very easy.

We are in a struggle for the soul of our government, and if we ever hope to turn things around we have got to clean out swamp creatures such as Peter Strzok. I believe that Thursday’s hearing was certainly a step in the right direction, and hopefully Congress will do much more to restore our faith in the integrity of our law enforcement agencies.