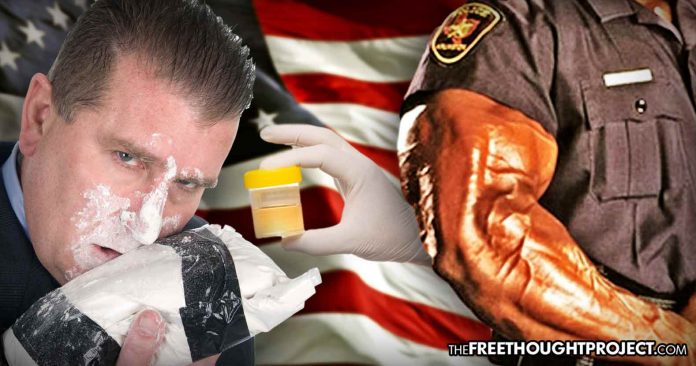 Last month, Louisiana Congressman, Rep Clay Higgins, (R-LA) proposed a piece of legislation that would require all members of government to take and pay for their own drug tests. While we at the Free Thought Project feel that anyone should be able to ingest any substance without the state knowing, if there were an exception to this, it would be the state—who kidnaps, cages, and kills people for possessing and using these very substances.

For this reason, we have compiled a list of five reasons why we feel that if members of government are getting high on the taxpayer’s dime, the citizens have a right to know.

1. The first and most obvious reason government employees, agents, and politicians should be drug tested is that all of these folks will throw citizens in cages for the very same behavior.

While we feel that the drug war should be brought to a grinding halt and all drugs legalized, when government employees arrest people for the very same thing they do behind closed doors, we have a problem.

On a regular basis, politicians, cops, and government employees in general are caught using drugs which compromise their positions and either fail at their jobs or hypocritically enforce the same laws they are breaking.

2. That brings us to our second point. Often times, politicians caught using drugs are only caught after doing something else related to their drug use.

TFTP has reported on police officers stealing money from people to finance their opioid addictions, or politicians using the drug war to cover up their crimes.

Time and time again, we see cops raid the homes of drug dealers only to steal their product and money to open their own drug dealing enterprises or fuel their own addictions. This has manifested into dangerous situations in which cops secretly become addicted to certain drugs only hurt innocent people or crash their cars—with some of them even crashing into schools.

3. While police have been caught time and again getting addicted to the drugs they “take off the streets,” there is another reason that police officers in particular should be drug tested. Steroids.

It is certainly the belief of the Free Thought Project that anyone should be able to put anything into their own body without persecution of the state. However, police officers using anabolic steroids—which include a host of aggressive side effects—is an extremely bad idea.

There is no question that many police officers use performance-enhancing drugs. In fact, the problem of police steroid use became so bad, in 2004, the DEA intervened to warn of the “possible psychological disturbances” of roid-raging cops.

Eventually, a few years later, the International Association of Chiefs of Police, made up of 16,000 members worldwide set a standard that “calls upon state and local law enforcement entities to establish a model policy prohibiting the use of illegally obtained steroids” by officers.

Not only do cops vehemently resist being drug tested by their departments, claiming it is a violation of their civil rights, they are also frequently caught selling steroids.

On a regular basis we hear politicians, cops, and their supporters constantly call for drug testing welfare recipients, veterans, and others. All the while, politicians themselves sit back freely without worry that someone will find out about their Xanax addiction or cocaine habit.

Highlighting this point is the fact that the DEA themselves has been caught repeatedly engaging in parties at which prostitutes and cocaine are not just taking place in the back rooms, but are the very theme of the party.

5. If government employees got a taste of their own medicine, maybe it will open their eyes to the horror and hypocrisy of the war on drugs.

If drugs were legal this would be a moot point. All the corruption associated with being able to break the drug laws they are tasked with enforcing disappears overnight.

The CIA would lose its ability to traffic in cocaine to finance proxy wars in sovereign nations. Cops stealing from evidence lockers and becoming drug kingpins would cease to exist. The prison industrial complex which feeds off of other people’s addictions would be brought to its knees. And people who need help—instead of jail—would be able to do so without fear of being kidnapped, caged, or killed.

So, while drug testing government employees may be ineffective at curbing the actual use of drugs, if they kept getting caught doing them, perhaps it would accelerate the end to this brutal war on drugs and the trillion dollars blown on enforcing it could go to something more useful—like back in the pockets of the people it was stolen from.