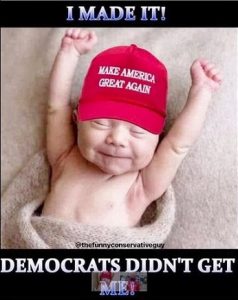 Title X is the only federal grant program dedicated solely to providing “low-income” or uninsured people (including those who are not eligible for Medicaid) with birth control, pregnancy tests, cancer screenings and other health care services at reduced or no cost. Supposedly, Title X’s purpose is the promotion of healthy families by enabling individuals to decide the number and spacing of their children.

In FY2010, Congress appropriated around $317 million for Title X, all paid for by taxpayers, 25% of which ($79.25 million) went to Planned Parenthood clinics.

One of President Trump’s campaign promises was to end U.S. taxpayer funding of abortion.

To that end, in May of this year, President Trump issued a new policy to deny Title X funds to “family-planning” facilities like Planned Parenthood that mention abortion to patients, provide abortion referrals, or share space with abortion providers. Pro-aborts call the new policy a “domestic gag rule”.

In June, the 9th Circuit Court of Appeals allowed the policy to be implemented, which led to the withdrawal of Planned Parenthood and other abortion facilities from the Title X program. In so doing, the abortion providers forfeited some $60 million, that is how determined they are on killing unborn and newly-born humans (“post-birth” abortions).

In a new report, the pro-abort organization Power to Decide laments that across America, an “alarming number” of “health centers”, i.e., abortion clinics, are “impacted” by the new policy, including: