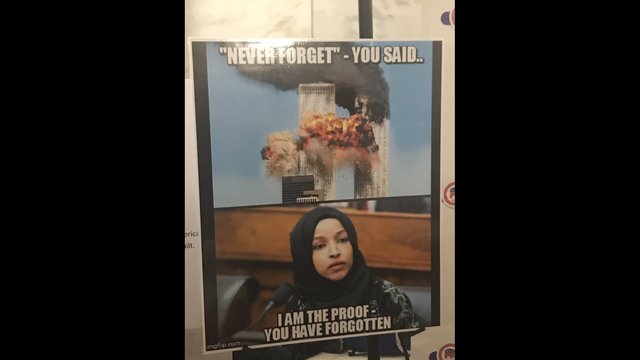 The Democrats and their running dogs in the enemedia are having hissie fits over a poster in the West Virginia statehouse that suggests Americans have forgotten the horrors of 9/11 and the promise to “Never Forget” because Americans are electing pro-jihad, pro-Islamic State Jew-haters such as Ilhan Omar. Indeed, the poster is accurate. Ilhan Omar pushed a judge for lenient sentences for Muslims who joined the Islamic State group. The Islamic State shared the same religious ideology and goals as Al-Qaeda and Osama bin Laden. In many cases, the Islamic State was more brutal, more savage than al Qaeda. The poster is correct.

Once again the left equates opposition to jihad terror with islamophobia.

Ilhan Omar defended nine men who sought to join ISIS, including Abdirahman Yasin Daud, sentenced to 30 years in prison by a federal judge. Omar has accused Israel of “evil doings” and called Israel an “apartheid state.” It isn’t surprising that Ilhan Omar would think this way. She is a hijab-wearing, devout Muslim, and Islamic Jew-hatred is in the Quran. What is shameful about this is that her views are mainstream in the Democrat Party today and are now being celebrated in the New York Times. She should never have been chosen as a candidate for Congress with hateful views of this kind, but this is the way the Democrat leadership, and the Democrat base, thinks. That’s why she won.

It was not immediately clear who put up the poster, but lawmakers got into a heated dispute over the display. The argument even became physical, leaving a doorkeeper allegedly injured and a lawmaker resigning.

A few Democratic lawmakers condemned the poster and allegedly got into a feud with Anne Lieberman, the House’s sergeant-at-arms, “after she allegedly made an anti-Muslim remark,” NBC News reported. Lieberman denied the remark but resigned Friday following the allegation.

The House has 59 Republicans and 41 Democrats. House Speaker Roger Hanshaw said the incident was being investigated.

“We have allowed national-level politics to become a cancer on our state … to invade our chamber in a way that makes me ashamed,” he said in remarks on the floor. “We can do better.”

Democrat Mike Pushkin called the poster “racist” and “wrong.” He said no Republicans condemned the display.

A poster connecting Minnesota Rep. Ilhan Omar to the Sept. 11 terror attacks sparked a chaotic scene at the West Virginia statehouse on Friday, where lawmakers got into heated arguments and one staffer was injured, a report said.

Omar is a Somalian refugee and one of the first two Muslim women sworn into Congress this year.

Several Democratic lawmakers condemned the sign, with one delegate calling it ”ugly and “hateful.”

Republicans argued that the poster was a “freedom of speech” issue.

The House’s sergeant-at-arms, Anne Lieberman, was allegedly overheard saying “all Muslims are terrorists,” and resigned over the incident.