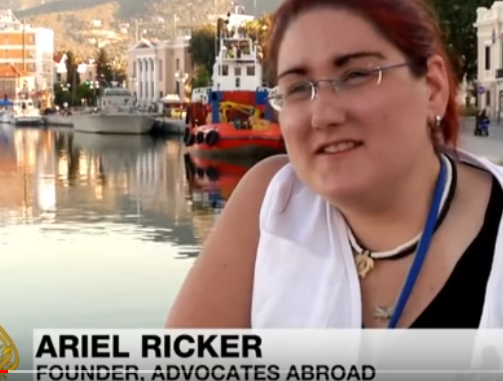 The European Asylum Support Office (EASO) is an European Union agency created in 2010 to improve protection for asylum seekers and to coordinate EU Member States on political asylum. The agency has a process to identify real refugees among the hordes trying to legally migrate to Europe.

Ariel Ricker is the founder and executive director of Advocates Abroad (AA), an NGO (non-governmental organization) founded in Febrary 2016 in Northern Greece. AA’s 380 advocates provide legal aid to refugees and migrants seeking political asylum in Europe, as well as prepare them for their asylum interviews. Recently, University of Cambridge students and 12 British MPs helped raise more than $60,000 for AA.

Lauren Southern is a remarkable 23-year-old Canadian woman and political activist who is the founder of the “Borderless” documentary project on the European migrant/refugee crisis.

George, a producer of “Borderless,” went undercover and took a video of Ricker describing how she and other “refugee advocates” coach migrants on how to pretend to be Christian refugees. Ricker reveals that her organisation, Advocates Abroad, has studied transcripts of asylum interviews so as to generate stock answers to key interview questions for asylum seekers to use. Advocates Abroad teaches applicants to simulate emotions like crying, in order to appear sympathetic, and to display certain refugee characteristics asylum officers are trained to look for, including how to pray as a Christian.

In the undercover video, beginning at around the 2:26 mark, Ricker describes how migrants are coached to fool EU asylum officers into thinking they are genuine refugees:

Ricker: “So we teach them how to, like, literally [feigns being emotionally overwraught; deep sigh], sometimes as simple as this, and then how to tell their story, how to frame it, how to literally explain it, and how to keep their private emotions and their private trauma private, because all this acting is a shield.”

George: “Do you have to coach people on, like, physicality?”

Ricker: “Yeah, I see it like, um, I tell them that this is, um, acting, all of this is acting, it’s all acting, as though this is theater. So, for them to get through, they must act their part in the theater, and that [their part] is the refugee in trauma, because these EASO (European Asylum Support Office) officers are so fucking stupid, all they know is what’s written on the paper EASO says this is refugee in trauma, they have these characteristics. So we coach people how to have these characteristics.”

Rickers: “There’s a formula we came up with, which is ironic because I suck at formulas. But it’s [the formula] like significant event, date, and location . . . answer all the questions the same way. [As an example, the migrant should say] in December 2017, in Izmir, Turkey, I was threatened for being a Christian because my boss and his friends jumped me when I was leaving my church. This is the Bible they tried to tear up. This is the crucifix I was wearing that they tried to tear, and it made me feel unsafe as a Christian in Turkey. Baboom. And that way you’ve had the event, the date and the location. So you’ve given them a very specific answer, and you’ve kept it in a tight, short answer as well, rather than rambling about . . . and it’s much harder to refute because you have all the elements in there. So like our narrative timeline format, like, has a fill-in-the-blanks section at this point, and then we have, like, two examples for home country being significant danger in that location, and then ditto for Turkey. So consistency is the most important thing, even if you find yourself in a position where you have to lie, because you suddenly remembered something else. It’s best just to stick with what you said.”

Ricker: “They put in the decision whether or not you were acting with emotion, so you have to be, like [feigns sighing and crying], or crying, or stopping, or throwing up, or asking for a break. So it’s, um, it’s becoming an actor.”

Man: “You have to tell people to ask to take a break?”

Ricker: “Oh, we do. We actually do role play. So we prepare them a folder. So, like, the first roleplaying activity we do is, like, us being them, and they’re the officer, and then we flip around after they’ve had some practice, to see how should I walk into the office, how should I introduce myself, how should I give them the folder, and then how do I sit down, and then when do I stand up, when do I show them how to pray.”

Man: “Why would you need to show them how you pray?”

Ricker: “Because it’s a good way to show honesty. This is done in other places too, like, uh, not good places, to see if you’re truly what you say you are. If you can’t show how you pray….”

Man: “If you’re actually a Christian?”

Man: “Oh, so if you’re saying that you’re fleeing persecution….”

Ricker: “Then you should probably know how to be, you know, praying that way. They also ask, like, what’s your favorite holiday? So, like, some people just say, like, Christmas. But, like, we explain you can’t just say this because this is not a sufficient answer. You have to say, uh, and you have to say this a certain way, which is, like, December 25th, which is Christmas, which is the birthday of our Lord and Savior.“

Lauren Southern says that some of the “migrants” whom Advocates Abroad is teaching how to pretend to be “refugees” are wealthy Muslims who are not being persecuted, as well as criminals and ISIS terrorists.

Watch the video on Bitchute.