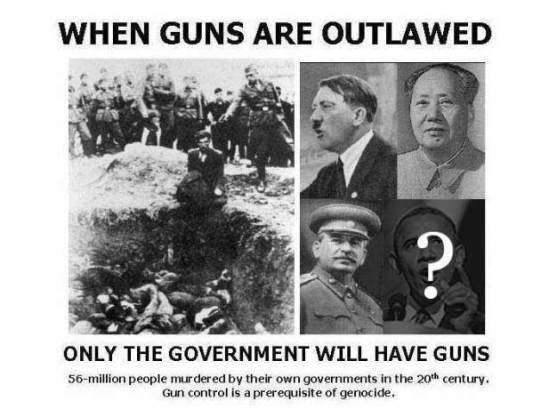 Arguably one of the rights that has seen less government encroachment in the US — in contrast to other activities such as commerce — gun rights are now witnessing unprecedented attacks at the state level and even from politically-connected corporate entities.

Although gun control laws are not created equally in terms of overall impact, gun confiscation holds a special place in the halls of political repression. A trip down memory lane will give us a refresher of how gun confiscation has helped consolidate government power.

The Soviet Union and Its Satellite States

The Soviet Union left its mark as one of the deadliest political regimes in the history of mankind. However, it could not get away with such atrocities without having a complete monopoly on the use of force.

Ironically, the famous Soviet leader Vladimir Lenin called for a proletarian militia in his essay Letters From Afar.Lenin charted out his vision in the following passage:

What kind of militia do we need, the proletariat, all the toiling people? A genuine people’s militia, i.e., one that, first, consists of the entire population, of all adult citizens of both sexes; and, second, one that combines the functions of a people’s army with police functions, with the functions of the chief and fundamental organ of public order and public administration.

Lenin’s ideas manifested themselves in military form once the Military Revolutionary Committee was created in late 1917. Despite the ostensive revolutionary nature, these military forces morphed into another enforcement arm of the State.

To maintain its iron grip, the Soviet Union had to turn to the most proven form of suppression — gun confiscation. On December 10, 1918, the Council of People’s Commissar mandated that Soviet citizens turn in their firearms. Failure to do so, led to criminal prosecution.

Soviet gun control laws remained tight in the following decades, although the government did go out of its way to give Communist Party affiliates privileged access to firearms.

Once World War II came to an end, Eastern European countries took after their Soviet overlords and started implementing gun confiscation, as detailed in Firearms Possession by ‘Non-State Actors’: The Question of Sovereignty. Several countries stood out during this time period:

Although the numbers are highly disputed, Robert Conquest contends in his book The Great Terror that at least 15 million people perished under Soviet rule.

These days the word Nazi is tossed around liberally, almost rendering its definition meaningless. Regardless, the history of Nazi Germany should never be forgotten. Interestingly, both sides of the gun debate make mistakes when discussing gun control policy in Nazi Germany.

The pro-gun control side claims that gun rights were actually expanded under Nazi rule, but there is more to this story. The marginal liberalization in gun laws specifically favored the German populace. Independent Institute Senior Fellow Stephen P. Halbrook gives a nuanced account of the Nazi’s gun policy:

In 1938, Hitler signed a new Gun Control Act. Now that many “enemies of the state” had been removed from society, some restrictions could be slightly liberalized, especially for Nazi Party members. But Jews were prohibited from working in the firearms industry, and .22 caliber hollow-point ammunition was banned.

In sum, the Jewish populace was disarmed and had no way of defending itself against the increasingly militant Nazi political operatives.

But pro-gun advocates aren’t exempt from making mistakes in their analysis either.

Second Amendment supporters often attribute gun control’s passage exclusively to Adolf Hitler’s government. However, a more thorough review of history demonstrates that the preceding Weimar government was responsible for passing gun registration. Weimar officials rationalized the passage of gun control in the name of public order, for fear of Nazis and Communists coming to blows on the street.

Unbeknownst to the Weimar government, their gun control framework would later be exploited by the Nazis to disarm the Jews and subject them to one of the most horrific cases of genocide in human history.

Once one of Latin America’s most prosperous countries, Cuba succumbed to the siren song of socialism when Fidel Castro took power in 1959.

Similar to the Nazi case, Castro took advantage of firearm registration lists established by the previous government. Once the dictator Fulgencio Batista was deposed, Castro’s tyrannical instincts kicked in. In a speech at the Maestre Barracks of San Ambrosio, Castro exclaimed:

Guns, for what? To fight against whom? Against the Revolutionary government that has the support of the people?

Like other socialist programs, the Cuban experience has been filled with death and economic destruction. Estimates point to 141,000 Cubans murdered at the hands of the Castro regime, with millions of Cubans fleeing to the United States in search of greener pastures.

The Venezuelan government started by passing the original version of the Control of Arms, Munitions and Disarmament Law. Since then, the law has been modified to broaden the scope of the firearms regulated by the Venezuelan Armed forces, who have the power to register, control, and confiscate firearms.

The day of reckoning came when Venezuela banned the sale of firearms and ammo in 2012, under the guise of fighting crime. Despite the gun ban in place, crime rates continue to skyrocket.

Now Venezuelans have no way of defending themselves against a government that is free to muzzle their speech, expropriate their wealth, debase their currency, and starve them to death. And if that weren’t enough, the average Venezuelan must contend with the constant threat of common criminals and colectivos, Venezuela’s infamous pro-government paramilitary units.

Even in the 21st century, the nasty effects of gun confiscation are still being felt.

Is South Africa Next?

South Africa has recently embraced gun confiscation. According to The Citizen, the Constitutional Court of South Africa ordered the confiscation of about 300,000 firearms on June 7, 2018. To say political tension in South Africa is mounting would be an understatement.

Although politicians from the African National Congress (ANC) party have recently backed down from ramming land confiscation legislation into law, there is no telling what could be in store for South Africans now that gun confiscation has been activated.

It would be a mistake to believe South Africa’s gun confiscation ordinance was a random occurrence; it’s the logical conclusion of South Africa’s current gun control framework. The genesis of this troubling development began with the passage of the Firearms Control Act of 2000, which features an extensive system of gun registration.

It’s easy for anti-gun entities to identify gun owners and confiscate their firearms in the long-run when they have their information on the books. With the wrong political actors in power, yesterday’s “common-sense” gun control could be tomorrow’s vehicle for gun confiscation.

Time will tell if South Africa will descend down the path of tyranny, but its gun control experiment may prove to be fatal should the country take a turn for the worse.

Gun control may not have a path dependency toward tyranny. However, gun confiscation is an egregious form of gun control that allows authoritarians to steamroll their subjects at will. The way gun confiscation enhances the consolidation of state power is undeniable. A disarmed populace is simply no match for a repressive apparatus that has a monopoly on the use of force.

Gun rights might not guarantee victory against tyrants, but being deprived of them all but guarantees submission.