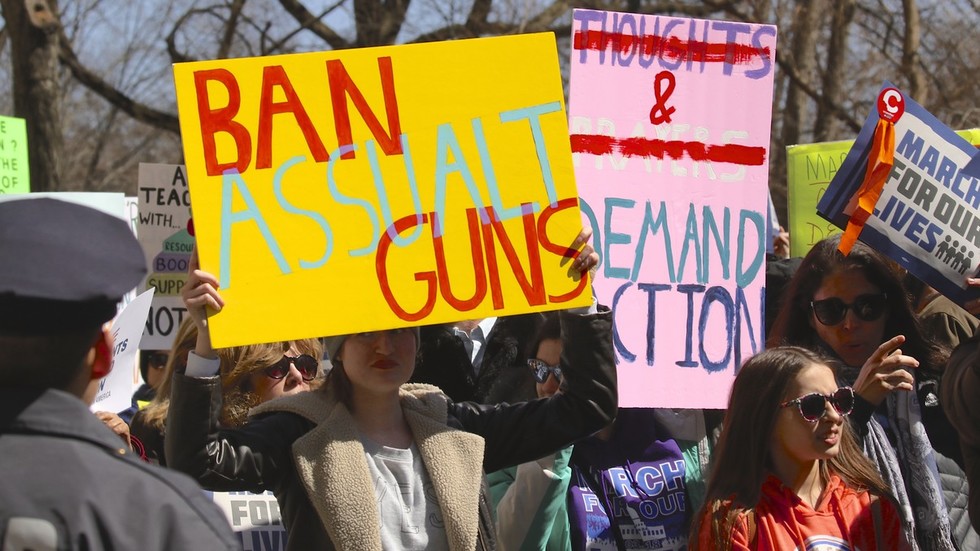 Share
Tweet
Share
Pin
US House Speaker Nancy Pelosi has said that by invoking a national emergency to build a border wall, Donald Trump would be setting a precedent that would allow a future Democratic president to do the same for gun control.

After the White House announced that Trump would declare a national emergency to make up for the lack of funding for his border wall, Pelosi warned that once Democrats take over the White House, they might just resort to the same means to push forward their own partisan agenda.

Specifically, Pelosi suggested that Democrats could enact stricter gun control laws, sidestepping conservative lawmakers who would be certain to mount a fierce opposition.

“Let’s talk about today: The one-year anniversary of another manifestation of the epidemic of gun violence in America. That’s a national emergency. Why don’t you declare that emergency, Mr President? I wish you would,” Pelosi said on Thursday, adding that “a Democratic president can do that.”

February 14 marks one year since the deadly shooting at Marjory Stoneman Douglas High School in Parkland, which left 17 students and staff dead and reignited the debate over gun laws, one of the most divisive issues in US politics. Over 100 people were killed or injured in school shootings last year, one of the worst in terms of the sheer number of such incidents since the 1970s.

Pelosi made her thinly veiled threat just after White House Press Secretary Sarah Sanders announced that Trump would avail of his constitutional power to declare an emergency to “stop the national security and humanitarian crisis at the border” once he signs the spending bill.

The bill allocating just $1.3 billion for a barrier along the US-Mexico border – a far cry from the $5.7 billion requested by Trump – has been approved by the Senate and is currently going through the House.

Pelosi then toned down her rhetoric a bit, noting that she does not “advocate for any president doing end-run around Congress,” and said that she was merely warning Republicans “about the door that they are opening, the threshold they are crossing.”

Donald Trump’s ridiculous wall is not an emergency.

Trump has long floated the idea of declaring an emergency if he fails to obtain the manpower and funds needed to secure the border through the normal legislative process. With Democrats refusing to budge, slamming the wall as “immoral” and “ineffective,” the US entered a record-breaking government shutdown and risked another one if Trump refused to sign the bill by Saturday.

Democrats have dismissed Trump’s threat to declare an emergency as a “non-starter.” Senate Minority Leader Chuck Schumer called it a “gross abuse of power of the presidency” on Thursday, and Pelosi denounced it as “another demonstration of a naked contempt for the rule of law” by Trump. Democratic presidential contenders Kamala Harris and Elizabeth Warren didn’t mince their words either, with Harris calling it “a ridiculous vanity project.”

Law only allows the use of a #NationalEmergency in two scenarios:
1. Declaration of war
2. Emergency requiring the use of armed forces

Not because you failed at negotiating & Mexico won’t pay for your racist wall.

The American people will see you in court, @realDonaldTrump.

Trump is declaring a national emergency to bypass Congress, to build a wall we don’t need, to address a crisis that doesn’t exist, by claiming an authority he doesn’t have.

If that sounds like nonsense, it’s because it is. It’s also plainly unconstitutional.

While the majority of Republicans have rallied behind Trump, some have voiced concerns that the declaration might violate the constitution and set a dangerous precedent.

I couldn’t be happier with the @realDonaldTrump power move today! https://t.co/wwoIfpwSYE

Sen. Susan Collins (R-Maine) said that it strikes her as “undermining the appropriation process, the will of Congress and of being of dubious constitutionality.” Sen. Marco Rubio (R-Florida) said that while he believes there is a crisis at the US’ southern border, the declaration may pave the way for a future president to “use the exact same tactic to impose the Green New Deal.”

Breakaway Republicans John Kasich and Jeff Flake have both fumed at the proposal.

The President is right to sign the border compromise legislation. The courts must quickly review his dubious emergency declaration so that he and future Presidents are limited in their ability to declare national emergencies. pic.twitter.com/Nzr1HqwrC6

Declaring a national emergency to circumvent Congress is not just bad precedent for the future, it is bad policy today.https://t.co/oRvniVOwcg

While declaring a national emergency is a common move by a US president, it is not exceptionally rare. Currently, 31 national emergencies are still ongoing, with the one restricting trade with Iran in place since 1979.

For instance, Trump’s predecessor, Barack Obama, invoked his executive power to declare an emergency 10 times. Trump himself has done it three times so far.