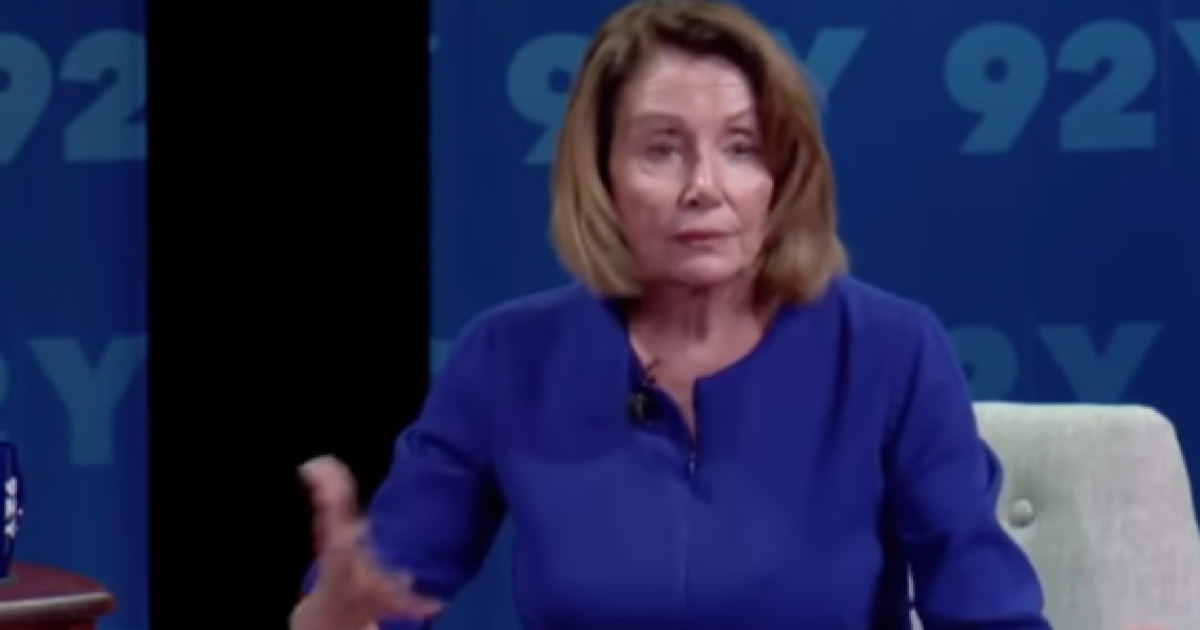 Nancy Pelosi, Democratic Representative from California, makes it easy to respond to her nonsense. One, because it is nonsense and there is no way in a lint snowball that she cares one iota about American citizens. Two, because she is the epitome of the pot calling the kettle black; she wants government to provide every American with financial security, but she really is only worried about her own.

Nancy, Nancy, Nancy. Why are you, who has never held a “real job” in your life, talking about government being there for Americans’ financial security when you have done everything to undermine Americans’ financial security? You have been in politics since your graduation from Trinity College. There is no way that you have any idea of what it means to work for a living at any job that involved manual labor, a skill set, or a trade or career learned in college. You have zero work experience except politics. One cannot call anyone sitting in government as “working” or even “governing” because it all revolves around who can shoot the most bull from the pulpit of “promises spoken to secure votes.” Besides, being in “politics” does not equate to one knowing the framework of our government nor the law it is to follow – The Constitution for the united States of America.

As an FYI, Nancy, government is not authorized to be there for the financial security of its citizens; government exists to protect the God-given individual unalienable rights of the people. But, a heretic Catholic Christian, such as yourself, would not know anything about God because you have seen fit to mock Him on plenty of occasions. Trust me, Nancy, when I say, God will not be mocked.

Nancy, it is disturbing that you would issue such a veiled threat to many of the American people. Let me remind you of that thinly veiled threat – “… if there is some collateral damage for some others who do not share our view, then so be it, but it shouldn’t be our original purpose.” Trying to hide the fact it will be your original purpose was futile. Many picked up on it. You mean to hurt anyone and everyone who does not share the view of the “Democratic” Party, which is no longer the party of John F. Kennedy; it is more along the party line of Josef Stalin, Mao Tse Tung, Pol Pot and Fidel Castro. If you haven’t guessed, this is one person who does not share your view; but, be careful about seeking to inflict damage on those who oppose you in every way. Things can backfire, you know.

While you may silver-tongue your way to get the weak-minded, gullible and weak-willed to support your agenda and anti-constitutional stance, those of us who understand how things work know that what you seek to do will damage everyone in the US, not just those who oppose you. As you condemn Republicans for supporting the one percent or the wealthiest of Americans, you, sitting on a net worth of multimillions, are in the one percent you condemn Republicans protecting. In truth, you politicians are all about protecting each other and each one’s gravy train elected office and any crimes you commit while in office – the American people be damned.

You have clamored for the unfettered, unlimited illegal alien invasion of millions and awarding citizenship to those in this republic criminally, all for the votes to Democrats. Yet, you have lobbied for the murder of tens of millions of potential Democratic voters when you supported the murder of babies in the womb. The cries from Democrats and other party politicians on needing immigrants to fill jobs because there are not enough Americans to do so is utter hogwash in light of the numbers unemployed and the tens of millions murdered in the womb. Furthermore, when colleges graduate students with useless degrees in what amounts to underwater basket weaving to indoctrinate young adults into anti-constitutional, anti-freedom ideologies, it is no wonder there is a workforce shortage. But, this is the doing of all of the politicians in office today. Instead of statesmen, the people elect morons and idiots because it is all that vies for elected office.

If you didn’t know, people are perfectly capable of governing themselves, without political hacks and charlatans. The people do not need political parties. Political parties need the people. The people do not need any political party or anyone in any political party advocating violence against those who oppose their platform. You and others support ideologies anathema to our constitution, particularly socialism, communism and Marxism. Those ideologies have never worked and will never work as long as there are those who value freedom and liberty. And, contrary to what you think or believe, the people clamoring for socialism and communism, who may support you now, will rethink that position if those ideologies are ever implemented.

Many of the people see through you and the Democrats, Nancy. When Democrats held both chambers of Congress and the presidency, nothing was done on illegal alien invasion or those here criminally, except to ignore constitutionally passed immigration law. But, let Republicans take control and it is all the rage with Democrats slamming Republicans for inaction on those here criminally while attempting to enforce immigration law. This is just one example of the utter hypocrisy coming from both sides of the aisle. It’s a battering ram used by both sides to club the people into casting votes for the party of choice to “stop” the other party’s agenda. In truth, the end is the same regardless of the platform used to get there. In fact, it is the modus operandi of both parties to stay in control of government.

Republicans are truly no better than you Democrats. All of you speak out of both sides of your mouth with reality being something you refuse to acknowledge. The reality is both want power and control and both will say anything to get it and keep it. Both political parties’ mantra has become “the American people be damned as long as we can run the government.”

Nancy, you and your ilk, along with Republicans are all criminals in one form or another. And, whether you want to believe it or not, many Americans are sick and tired of criminals in government making criminals out of Americans who do nothing more than exercise their right to freedom, liberty and the pursuit of happiness. As they always say, “still waters run deep.”

While there would be nothing more fitting than for you to be put in your place, it is being taken care of better than anyone on this earth can do. Remember, you are free to choose whom you will serve. It is obvious you have made your choice and it is obvious you made the wrong one.