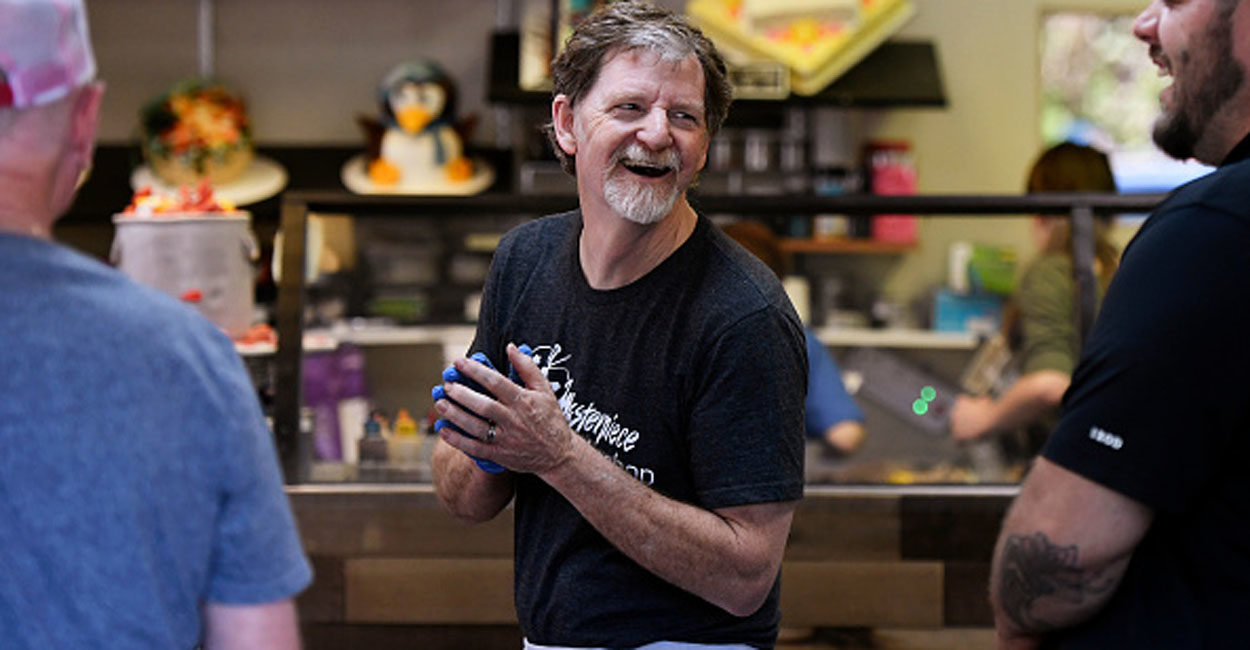 Colorado baker Jack Phillips is 2-0 now after state officials dropped their second attempt to coerce him into baking products that violate his beliefs.

“I have and will always serve everyone who comes into my shop; I simply can’t celebrate events or express messages that conflict with my religious beliefs,” Phillips said in a statement Tuesday.

“Today is a win for freedom,” he added. “I’m very grateful and looking forward to serving my customers as I always have: with love and respect.”

On the same day Phillips won a 7-2 decision in the U.S. Supreme Court, June 26, that he did not have to bake and design a cake for a same-sex wedding, a lawyer asked Masterpiece Cakeshop to bake a gender transition cake that was pink on the inside and blue on the outside.

The Colorado Civil Rights Commission, which had previously targeted Phillips for fines regarding the same-sex wedding cake, again found probable cause that state law required him to bake and design the gender-transition cake.

Phillips, in turn, filed a lawsuit in the U.S. District Court for the District of Colorado.

“Colorado was relentless in seeking to crush me and my shop for living consistently with my deeply held religious beliefs,” Phillips said.

On Tuesday, Colorado Attorney General Phil Weiser, a Democrat, announced the Colorado Civil Rights Commission was dropping its action and Phillips would drop his federal lawsuit.

“After careful consideration of the facts, both sides agreed it was not in anyone’s best interest to move forward with these cases,” Weiser said in a statement. “The larger constitutional issues might well be decided down the road, but these cases will not be the vehicle for resolving them. Equal justice for all will continue to be a core value that we will uphold as we enforce our state’s and nation’s civil rights laws.”

The members of the state’s commission could have been held “personally liable” for harassment if the matter continued, said Hans von Spakovsky, senior legal fellow at The Heritage Foundation.

“It’s probably because they may have finally gotten scared that they were going to get hit with sanctions for, in essence, directly thumbing their nose at the Supreme Court and the court’s decision in this issue,” von Spakovsky told The Daily Signal. “It could make them personally liable for damages if they abuse their positions to try to harass an individual.”

In the 7-2 majority opinion, Justice Anthony Kennedy wrote: “The Civil Rights Commission’s treatment of his case has some elements of a clear and impermissible hostility toward the sincere religious beliefs that motivated [Phillips’] objection,”

Colorado Civil Rights Commissioner Diann Rice compared Phillips to those who supported slavery and the Holocaust. She said in 2014:

I would also like to reiterate what we said in … the last meeting [concerning Jack Phillips]. Freedom of religion and religion has been used to justify all kinds of discrimination throughout history, whether it be slavery, whether it be the Holocaust … I mean, we can list hundreds of situations where freedom of religion has been used to justify discrimination.

Phillips, the son of a World War II veteran, shared with The Daily Signal in 2017 how he felt about Rice’s comparison:

After the high court ruling, Jessica Pocock, a member of the Colorado Civil Rights Commission, later called Phillips a “hater.” Commission members Rita Lewis and Carol Fabrizio agreed with the Rice comparison in 2018, according to Alliance Defending Freedom.

This concludes the state’s six-and-half years of hostility toward Phillips’ Christian beliefs, said Kristen Waggoner, the senior vice president of U.S. legal division for Alliance Defending Freedom, who argued his case before the high court.

“This is the second time the state has launched a failed effort to prosecute him,” Waggoner said in a statement. “While it finally appears to be getting the message that its anti-religious hostility has no place in our country, the state’s decision to target Jack has cost him more than six-and-a-half years of his life, forcing him to spend that time tied up in legal proceedings.”