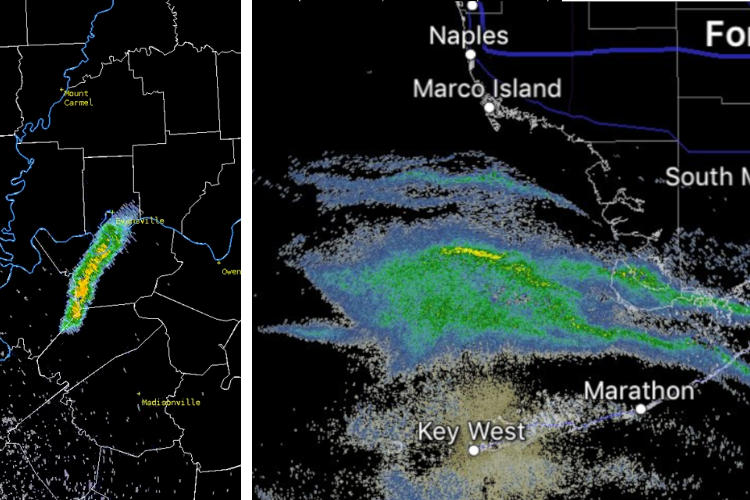 Across America meteorologists frequently see anomalous formations showing up on radar that have no connection to trending weather patterns. In some cases these unnatural formations are found to have been caused by emissions from power plants which can cause weather changes including several inches of snow.

There is more to this story, though, and something else happening in the skies over America that isn’t being fully revealed.

In 2016 we reported on a NASA program which involved spraying the mind-altering chemical lithium into the upper atmosphere above the United States, for research purposes. This was corroborated in an interview with NASA scientist Douglas Rowland, who said the overhead spraying was of no harm to the environment.

In 2018 we reported on a collection of video clips of local meteorologists reporting on supposed chaff spraying by military aircraft. Military chaff is a particulate substance made primarily of aluminum and aluminum coated fiber glass which is sprayed into the sky to jam enemy radar and communications equipment. Aluminum is a substance that is widely known to be harmful to human and animal health when ingested, but these types of overhead exercises are apparently very common.

“Chaff consists of small fibers that reflect radar signals and, when dispensed in large quantities from aircraft, form a cloud that temporarily hides the aircraft from radar detection. The two major types of military chaff in use are aluminum foil and aluminum-coated glass fibers. The aluminum foil-type is no longer manufactured, although it may still be in use.” [Source]

Here, an ex-military weatherman tells the public everything they need to know about chaff.

The most recent incidents of such mystery aerosol formations over populated U.S. areas is from December, in which meteorologists from Illinois, Indiana and Kentucky all reported seeing unusual lines of formations. After quite a mystery, it was eventually agreed upon that this particular incident involved C-130 aircraft spraying chaff in the skies.

“Back on Dec. 10, the Evansville area was embroiled in intrigue when mysterious radar blips appeared over Southern Illinois and Western Kentucky. The long lines baffled the National Weather Service because they looked like storms – but it wasn’t raining.

The War Zone eventually confirmed the anomalies arose when a C-130 traveling to West Virginia from a military exercise out west released over our area huge plumes of military chaff – radar-jamming material mostly composed of aluminum.” [Source]

Here is a tweet about the December event over the Midwest, including radar footage:

Folks are still trying to figure out what this is. pic.twitter.com/pZVoewciXE

And more footage, this one from the National Weather Service, showing a 6.5 hour loop of this phenomenon:

The leading theory is chaff that originated in far southern Richland County IL around 2:50 PM this afternoon. Here is a 6.5 hour loop…. pic.twitter.com/eVwEbLVsQ7

Shortly after the recent incidents in December, another similar event occurred, however, local meteorologists and television crews have not been able to find a suitable explanation. Another event occured shortly thereafter off the coast of southern Florida and over Portland, Maine.

“Similar blips materialized on radar over Portland, Maine, on Dec. 12. The National Weather Service there also guessed chaff was to blame.

Radar blips are seen over Maine on Dec. 12. Military chaff was reportedly to blame. (Photo: Courtesy of the National Weather Service)

But unlike here, no concrete explanation sprang forth.

According to The War Zone, the one Maine Air National Guard flying unit doesn’t have any planes equipped to release chaff. And it’s not like a plane from a different base would jet all the way to Maine just to spew chaff.

That same day, strange radar shapes appeared over the Florida Keys, too. Again, the NWS guessed it was chaff – Florida is apparently rife with military exercises – but that hypothesis was never confirmed.” [Source]

Appears to be #Chaff also showing up on radar in SoFL pic.twitter.com/tkDDrNW6F9

Of note is the fact that the military, NASA and certainly other organs of the Federal government are actively engaged in spraying materials into skies over America, without the consent of we the people living below. And this practice seems to be occurring with greater frequency as we enter the age of open bioengineering, which was oddly considered to be a conspiracy theory until mainstream news organizations began in recent years to report on the pressing need for solar radiation management in order to curb global warming.

Solar radiation management is a euphemism for chemtrails, which describes the practice over spraying massive quantities of toxic chemicals in the skies over populated areas.

Terence Newton is a staff writer for WakingTimes.com, interested primarily with issues related to science, the human mind, and human consciousness.

This article (Across America Mystery Planes are Releasing ‘Huge Plumes’ of Aluminum and Other Particles, Baffling Meteorologists) was originally created and published by Waking Times and is published here under a Creative Commons license with attribution to Terence Newton and WakingTimes.com. It may be re-posted freely with proper attribution, author bio, and this copyright statement.