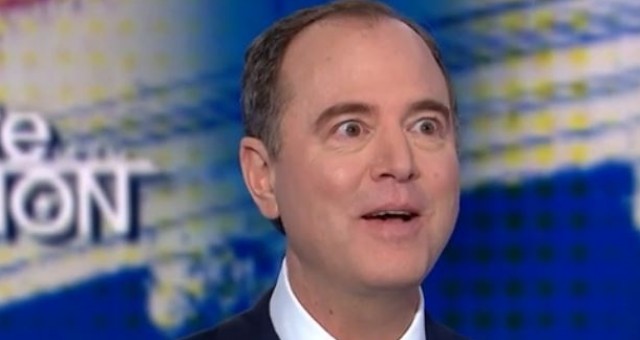 California Rep. Adam Schiff insisted this week that support for the impeachment and removal of President Donald Trump has grown.

But what Schiff, who is leading the charge to impeach the president, neglected to mention is that the most recent polls show that is not the case.

“Look, the public support for impeachment has grown fairly dramatically in the last two months,” Rep. Schiff said on “State of The Union” with host Jake Tapper.

“Adam Schiff says that public support for impeachment has grown dramatically in the past two months. He conveniently left out the polls from this week showing a decrease in support, especially among independents, after finally allowing public testimonies.”

Adam Schiff says that public support for impeachment has grown dramatically in the past two months.

He conveniently left out the polls from this week showing a decrease in support, especially among independents, after finally allowing public testimonies. pic.twitter.com/rLalX1PEqb

“So, whether it is now essentially at a plateau, or whether it will continue to grow or shrink, I don’t think is really the question we should be asking.

“I think, in the first instance, we should be asking, what’s our constitutional duty here? And if we decide our duty is to impeach, then we need to make the case to the American people. And we have to hope that we will be successful in making that case,” he said.

“But this shouldn’t be driven by what we think helps us in 2020 or hurts us in 2020. There are good arguments by commentators in either direction. I don’t think that’s the question I should be asking myself.

“And, as I mentioned it in my closing statement the other day, Jake, what brought me from an opponent of going down the road to impeachment into someone who felt it was necessary that we do this inquiry is the fact that, the day after Bob Mueller testified about Donald Trump’s invitation to the Russians to intervene, his willingness to make use of it in his campaign, the lies that he told about it, and the obstruction of justice in terms of the investigation into it, the day after that, Jake, Donald Trump was back on the phone asking yet another foreign leader, Zelensky, for yet more foreign help in another election.

“And I don’t think we can turn away from that. If there is not some deterrent, even if it doesn’t mean that the Republicans provide the kind of support for the Constitution that they should, if there isn’t some deterrent, we can darn well be sure this President will commit even more egregious acts in the months ahead,” he said.

It is simple for Rep. Schiff, who is in a safe district, to say that what helps Democrats in 2020 does not matter, but his fellow Democrats could decide that they do not feel the same way.

Vanity Fair writer Ken Stern showed in a piece that support for impeachment has actually decreased since the hearings began.

‘It Is Hard to Read This as Anything but a Warning’: New Polling Suggests Democrats’ Impeachment Push Could Alienate Key Voters,” the story is headlined.

“Alas, for the Democrats, the promising numbers of late October and early November rapidly dissipated, and polling numbers have reverted to a level more consistent with long-term opinions on President Trump,” Stern said.

“In the latest Politico/Morning Consult poll, released on November 19, Independents opposed impeachment and removal from office 46% to 39%, a number close to the rolling averages of the last few weeks,” he said.

“It is notable that the poll was fielded after the first public impeachment hearings. Even the compelling testimony of witnesses like Marie Yovanovitch, the former U.S. ambassador to Ukraine, failed to move the needle on public opinion.

“That doesn’t mean further hearings won’t energize greater opposition to Trump, but it’s a little hard to imagine more effective testimony than that offered by Yovanovitch and some of her Foreign Service colleagues,” he said.

That is bad news for Rep. Schiff and fantastic news for President Trump and for those who want our presidents to be decided by voters and not politicians.