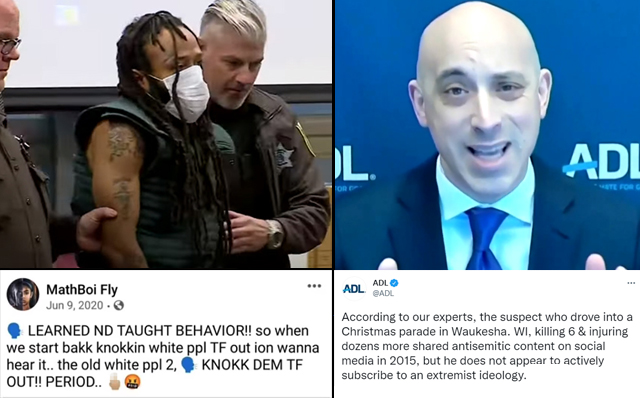 The Waukesha attacker is not a follower of any “extremist ideology,” so long as you ignore all his anti-white extremism.

“According to our experts, the suspect who drove into a Christmas parade in Waukesha. WI, killing 6 & injuring dozens more shared antisemitic content on social media in 2015, but he does not appear to actively subscribe to an extremist ideology,” the Anti-Defamation League said in a post on Thursday.

Apparently, sharing “antisemitic content” is the only thing that makes you an “extremist.”

Darrell Brooks made one post in 2015 with a completely made up Hitler quote full of gibberish and they define that as “antisemitic content” but his dozens of anti-white posts aren’t evidence of anything.

You can share endless anti-white content on social media, threaten white people with violence and call yourself a “terrorist” in your own music videos before running down nearly 70 of them but as long as you’re not “antisemitic” the ADL will not label you an “extremist.”

On the other hand, if you’re Tucker Carlson and you talk about the Great Replacement they’ll happily label you an extremist and a white supremacist, demand you be fired and organize a global boycott against you to get you off the air.

If you’re a member of the military, they’ll also happily spy on you for signs of “extremism” and monitor the websites you visit and your Google searches in order to label you an “extremist” and a “white supremacist” and get you kicked out of the military.