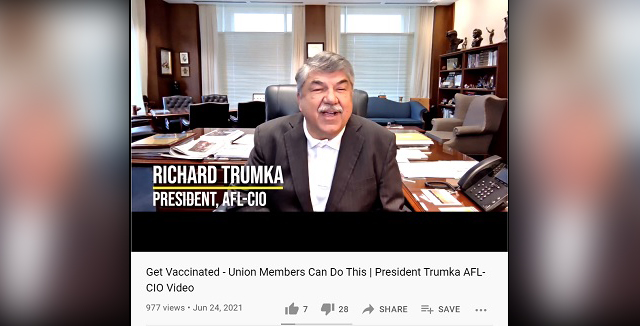 AFL-CIO president Richard Trumka died suddenly of a reported heart attack just one week after endorsing vaccine mandates in the workplace and selling out his union members yet again in a pledge of loyalty to our ruling oligarchs.

Trumka endorsed employers mandating vaccines for all workers on C-SPAN on July 27 (Skip to 16:44):

“If you’re coming back into the workplace, you have to know what’s around you,” Trumka said. “If you come back in and you’re not vaccinated, everyone in that workplace is jeopardized.”

Trumka went on to say the entire world needs to be vaccinated in order to “prevent variants.”

No doubt it’s just a coincidence that the shots he endorsed are linked to all sorts of heart troubles and blood clots.

Trumka, 72, had served as president of the AFL-CIO, which represents more than 12.5 million workers, for more than a decade and was called a “dear friend” by President Joe Biden.

He died of what was believed to be a heart attack, a source familiar with the matter said.

It remains to be seen whether his replacement will back his exact same policies but odds are it’ll just be more of the same.