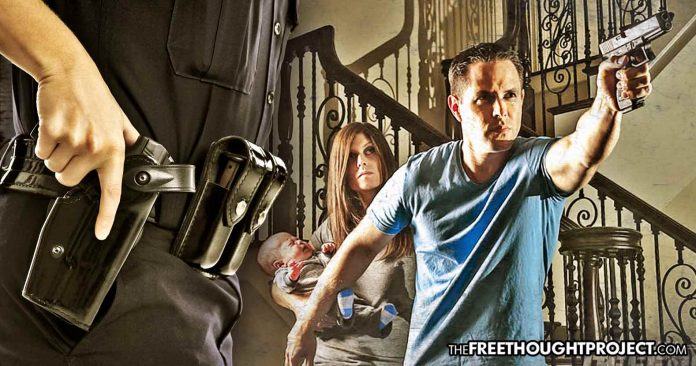 Aurora, CO — When an armed intruder broke into a family’s home early Monday morning, and reportedly began harming a juvenile inside, the homeowner did what he was supposed to do. He armed himself, called 911, and defended his home—and he was successful. However, after he’d successfully fended off the home invader—by killing him—police then showed up and killed the innocent homeowner.

Police say they heard gunshots inside the home and when they ran inside, they found an armed man. The armed man was the homeowner and they killed him.

BREAKING: Aurora PD responded to a reported break in and heard gun shots, confronted an armed man who was shot and killed by officers.

They also found a man dead inside the home. pic.twitter.com/BvPpLDDryX

There were no reports from officers claiming that the homeowner opened fire or even raised the gun toward officers. Also, none of the officers were hurt during the incident.

After clearing the scene, according to Metz, police found the intruder dead on the bathroom floor. Metz explained that officers also found a child in the residence who’d been seriously injured by the intruder. The child was taken to the hospital for “serious, but non-life-threatening injuries” caused by the intruder, Metz said.

According to Metz, the identities of the two men will be released by the Adams County Coroner’s Office. Metz also explained that the officer who killed the homeowner is on routine paid administrative leave.

As the Denver Channel reports, the Aurora Police Major Crimes Unit, the Denver Police Department and the 17th Judicial District Attorney’s Office will conduct the investigation into the shooting. Police are also asking anyone who witnessed the shooting to call Detective Randy Hansen at 303-739-6710.

“This is a very heartbreaking and tragic situation for everyone involved. We are providing assistance through our victim advocates to help the family of the deceased resident through this very difficult time,” Metz said in a statement.

Sadly, homeowners calling the police for help with armed intruders only to be shot or killed is not an isolated incident. As TFTP reported earlier this year, dashcam footage captured the disturbing scene as Deputies Keith Tyner and Richard Powell of the Charleston County Sheriff’s Department arrived at the home of then 26-year-old Bryant Heyward, who had called 911 after he’d just been the victim of a home invasion.

Heyward had fended off the two intruders who were threatening his home and his life, only to be critically shot and paralyzed by those who he had desperately called for help.

The cops responsible for leaving an innocent man paralyzed for doing the right thing and calling them—were not held responsible. The cop who shot the man in the neck—on video—was said to have “acted appropriately” by his superiors and he was not charged.

“We have concluded that Deputy (Keith) Tyner acted appropriately in response to an apparent deadly threat,” Senior Assistant Deputy Attorney General Heather Weiss said in a letter to state investigators in January, “and that there is insufficient evidence to merit criminal prosecution.”

Indeed, the officer in Aurora who shot and killed the homeowner in the story above will likely find himself in a similar situation of no consequences for killing.