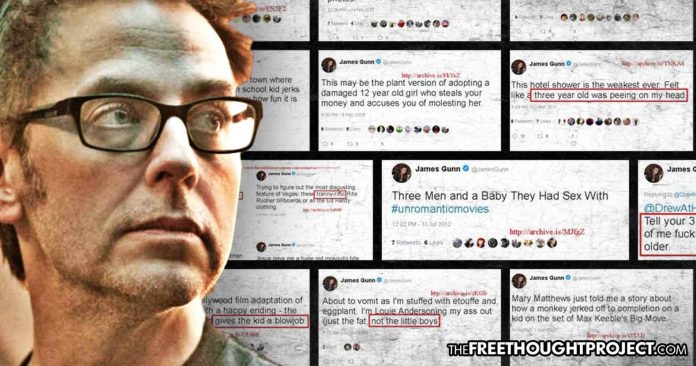 After his extremely offensive tweets about pedophilia and rape became widely publicized, Gunn apologized, but was ultimately fired as director of Disney’s “Guardians of the Galaxy Vol. 3.” Gunn released a statement Friday afternoon after Disney fired the director of the first two “Guardians” movies:

“My words of nearly a decade ago were, at the time, totally failed and unfortunate efforts to be provocative,” Gunn said. “I have regretted them for many years since—not just because they were stupid, not at all funny, wildly insensitive, and certainly not provocative like I had hoped, but also because they don’t reflect the person I am today or have been for some time.”

Interestingly, publication after publication described Gunn’s disgusting tweets as “off-color” or “edgy,” despite it being clear that talking about having sex with children is far beyond any type of socially acceptable humor—and potentially indicative of a sick psyche, as there is nothing humorous about the sexual exploitation of the most vulnerable in society.

As The Free Thought Project has reported, “When an adult is sexually attracted to an infant or a child, he or she is admitting attraction to an individual who does not have the ability to consent—thus why the concept is deemed wrong in society. If a child is molested or raped, it results in long-term physical, emotional and mental problems that will go on to affect the child for the rest of his or her life.”

But instead of attacking Gunn’s sickening tweets, the mainstream press en masse acted as the Praetorian guard and quickly attempted to attack the messenger by falsely labeling Cernovich a white supremacist and downplaying the “old” tweets in an effort to excuse Gunn’s commentary about children being used as sex objects.

Tellingly, almost none of these pedophilia apologists posted screenshots or quotes of the heinous tweets by Gunn in an effort to obfuscate what he had actually advocated. The compilation of some of Gunn’s tweets, posted by conservative journalist Jack Posobiec, gives further insight into the Hollywood director’s mindset:

Gunn further attempted to explain the tweets in a series of Twitter posts on June 19:

Ironically, Gunn himself explained why he should be fired in a tweet during the controversy surrounding ABC’s firing of Roseanne Barr for making a comment about Valerie Jarrett that was deemed racist. ABC is actually owned by Disney, which also owns Marvel Studios.

Interestingly, many of the same media outlets and left-wing pundits that were calling for Roseanne’s head on a platter after the Jarrett controversy, have been Gunn’s biggest defenders. It seems that having any modicum of logical consistency is too much to ask for ideologues in control of the mass media propaganda system.

It’s clear that there is a movement afoot, and being pushed across western mass media, to normalize pedophilia as a mainstream “sexual orientation.” As we previously reported, pedophiles are rebranding themselves as “Minor Attracted Persons,” with the hope that they will be accepted as part of the LGBT community—and the mainstream media seems content to carry the water in helping to normalize this extremely perverse and deviant behavior.