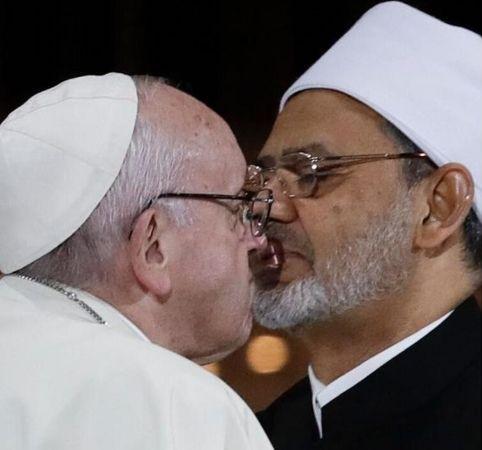 Last Thursday, the Jesuit periodical America sounded a dark note: “Are Nigeria’s Christians the target of a genocide? That is the conclusion of a number of religious freedom analysts and Nigerian clergy.” Yet the venerable Leftist Catholic magazine’s warning was veritably dripping with irony, for the same publication has for quite some time been vilifying and smearing people who did speak out against the persecution of Christians in Nigeria and elsewhere.

America reported that “Boko Haram Islamic militants have for years raged against minority Christian communities in northern Nigeria, and their intention to drive out ‘Western’ influences and establish an Islamic state in northern Nigeria seems clear. But increasingly brutal attacks on Christian villages in Nigeria’s central ‘middle belt’ region have been attributed to Fulani cattle herders and have been explained as the result of conflict over diminishing resources.” America even found that “Christians are being explicitly targeted in the ongoing violence.”

America quoted the Most Rev. Matthew Hassan Kukah of the Nigerian Catholic Diocese of Sokoto saying: “I would like to hear much much more from prominent archbishops in the United States and Europe.”

Yeah, that would be swell. But why aren’t these “prominent archbishops” saying anything about the persecution of Christians? A good clue comes from America magazine itself. While now, America has discovered that “Boko Haram Islamic militants have for years raged against minority Christian communities in northern Nigeria,” and that their fellow Muslim Fulani cattle herders have also carried out “increasingly brutal attacks on Christian villages,” in 2018, it was worried about “so-called experts seeking to spread misinformation and fear” about Islam.

This “misinformation and fear” had to do with not accepting the Catholic Church’s new de facto superdogma that Islam is a religion of peace, and the “so-called experts” included me. Heedless of the fact that I had left the Catholic Church a considerable time before 2018, America claimed that year that I was producing “misinformed and ill-intentioned content on Islam, for Catholic audiences in particular.” Some of this alleged “misinformation” was apparently the idea that “Muslims’ faith tradition is responsible for violence.”

America magazine is not actually being as inconsistent as it may seem at first glance. Even though America’s Kevin Clarke identifies Boko Haram as made up of “Islamic militants,” it is absolutely certain that he and his fellow America magazine writers would insist that Boko Haram was misunderstanding the beautiful and peaceful religion of Islam. They would no doubt affirm, with Pope Francis, that “authentic Islam and the proper reading of the Koran are opposed to every form of violence.”

But still, the magazine calls the persecutors “Islamic militants” and notes that Christians are being “explicitly targeted.” When America magazine demonizes an analysis of the motivating ideology behind this persecution, they make people afraid to speak out. The bishops in the U.S. and Europe that America magazine wants to speak out against the Muslim persecution of Christians now have been teaching for years that any discussion of such matters is “Islamophobic,” and will harm the “dialogue” between Muslims and Christians.

America magazine has been at the forefront of the efforts to silence such discussion by demonizing and stigmatizing those who engage in it. And now they want the bishops to speak out? The bishops know better. If they do, they’ll be denounced as “Islamophobic” themselves, probably by America magazine among others, and may even be disciplined by that learned imam Pope Francis, who has enforced the false claim that Islam is a religion of peace that has been hijacked by a tiny minority of extremists far more stringently than he has defended any actual element of Catholic faith. Whisper anything to the contrary and the U.S. Catholic Bishops will move ruthlessly to silence you. They’re going to speak out now? You’re dreaming, America mag, and you’re to a large extent responsible for the present situation.

“Leave them; they are blind guides. And if a blind man leads a blind man, both will fall into a pit” (Matthew 15:14).

Hot off the Press…