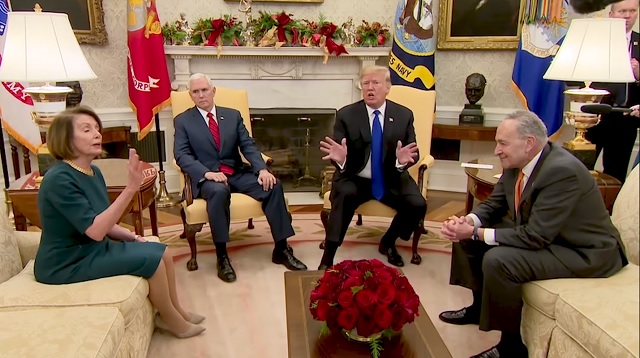 Why is it every time a woman loses an argument with a man they go straight to questioning their manhood?

Both Nancy Pelosi and Chuck Schumer got shellacked in an epic public debate with President Trump on Tuesday in the Oval Office.

Though Pelosi had no arguments at the time, after the shellacking she went straight to the media to accuse Trump of having a small penis.

Nancy Pelosi mocked President Trump’s “manhood” and questioned his basic understanding of government spending during a closed-door meeting with House Democrats on Tuesday, according to an aide in the room.

The California congresswoman, who’s vying to become the next House speaker, made the blistering remarks after returning to the Capitol from a tense Oval Office sit down with Trump, during which he repeatedly threatened to shut down the federal government if Congress fails to cough up at least $5 billion for his long-sought border wall with Mexico.

“It’s like a manhood thing for him,” Pelosi told the Dems of Trump’s wall obsession, according to the source. “As if manhood could ever be associated with him.”

Pelosi stressed she made clear to Trump there isn’t enough support in Congress for a wall and speculated the President is refusing to back down because he’s scared to run away with his tail between his legs.

“I was trying to be the mom. I can’t explain it to you. It was so wild,”Pelosi said of the Oval Office meet, which was also attended by Vice President Pence and Senate Minority Leader Chuck Schumer (D-N.Y.). “It goes to show you: you get into a tinkle contest with a skunk, you get tinkle all over you.”

All interactions must be reduced to primal, base instincts and power games.

“The only reason Trump wants to protect our border is because his penis is small.”

This is the best argument for open borders the leader of the Democratic Party can come up with.

She also rambled incoherently about being a “mom” in a “contest” involving her and President Trump urinating on one another.

What the hell type of political system is this exactly?