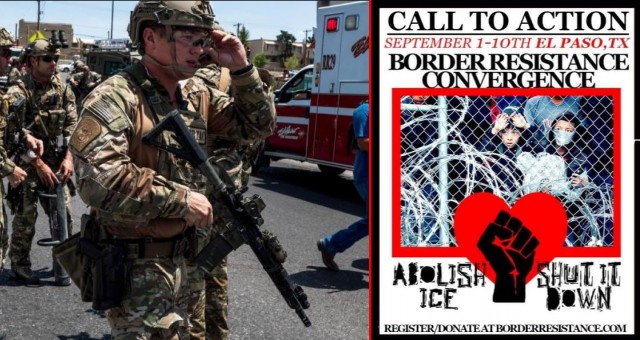 Antifa, the far left violent scumbags of the earth have plans to go to Texas and cause a sh*tstorm and perform “militancy exercises” at the border. But they are being warned NOT to go there and if they do, we will see how Texas deals with filthy scumbags.

The shooting came 29 days before a scheduled visit from Antifa, which planned to conduct a “Border Resistance” militancy training tour.

“Stay out of El Paso,” Patrick told Antifa during an appearance Fox News. He noted that while the group wasn’t usually welcome in Texas, they especially weren’t welcome after the shooting.

Antifa in Texas? What a joke.

Antifa is leading a "Border Resistance" militancy training tour that will converge on a 10-day siege in El Paso, TX. The promotional image shows border enforcement officers being killed & government property fired bombed. Organizers asking for "white comrades" to pay for others. pic.twitter.com/zwG7iMLMZT

A flyer for the event posted on Twitter by conservative journalist Andy Ngo showed people shooting arrows at a tower near what appeared to be a border fence. The group issued a “Call to Action” for 10 days in El Paso. Antifa is known for violent protests and attacks on police and journalists, including Ngo.

So if you belong to Antifa my advice is to stay away and stay in your mommy’s basements.

You scumbags don’t want to mess with Texans- trust me.