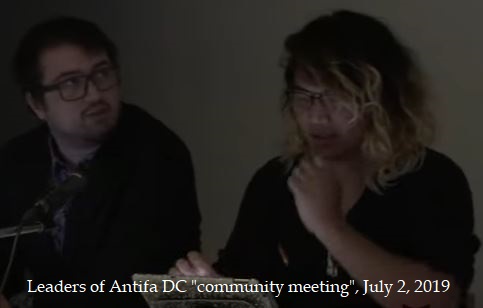 In April 2016, the Obama administration had identified Antifa as domestic terrorists.

Strangely, the designation of Antifa as domestic terrorists is ignored by both the Trump DOJ and FBI, as well as by police departments across the U.S., especially the Portland PD.

Last Saturday, June 29, in Portland, Antifa terrorists doused independent journalist Andy Ngo with milkshake containing quick-drying cement, viciously assaulted an elderly man with a crowbar, then maced and hit another man (who tried to help the elderly man) with the crowbar.

Now, the violent and lawless Antifa DOMESTIC TERRORISTS are planning to disrupt the July 6 Free Speech Rally in Washington, D.C.

On June 29, 2019, Big League Politics reports that a pro-Antifa individualwho calls himself “POUND ON YOUR BOY” threatened to attack attendees of the Demand Free Speech rally on July 6 in Washington, D.C. with “muriatic acid, wax, and balloons”:

“I just want to toss as many balloons of Muriatic acid in the faces as many Proud Boys I can [sic]. I just want to blind as many of you c**k suckers are possible [sic].”

The threats were made on a popular right-wing Telegram channel, which prompted the rally’s co-organizer and chairman of Proud Boys, Enrique Tarrio, to contact the FBI and DHS, who are now planning to provide additional security for the event.

On Tuesday, July 2, News2Share‘s Ford Fischer was invited to the “All Out DC” Antifa group’s “community gathering” on their plans to disrupt the Free Speech Rally. Fischer reported on the Antifa meeting in a series of tweets. He points out that “I believe myself, AP, and Washington Post were in the room but I’m the first/only one to report on this so far.”

Antifa DC concluded their “community meeting” with this plan (see below) for July 6.

On that day, Antifa DC will gather around Pershing Park, close to Freedom Plaza where the Free Speech Rally will take place, followed at 6 pm with a “protest” of Free Speech Rally’s after-party, wherever it occurs.