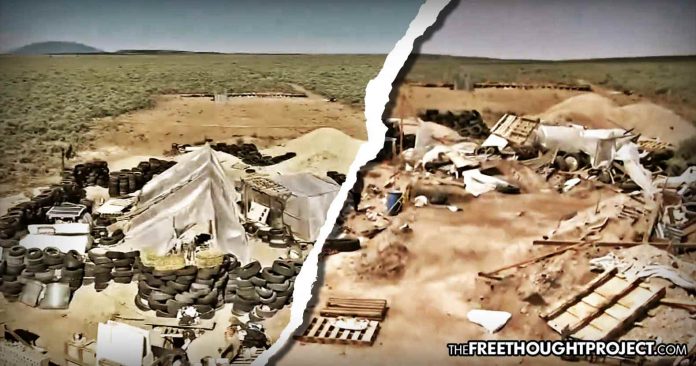 Taos, NM — Adding to the already insane nature of five suspected terrorist child killers being released this week, on Wednesday, after a judge granted them release, federal agents raided the compound once more and destroyed all the evidence by razing it to the ground.

As TFTP reported, the five accused child abuse suspects — arrested last week for allegedly training children to carry out school shootings — were released by a New Mexico judge despite frightening evidence against them. Days later, their compound was mysteriously ransacked by feds.

On a condition of their release, the defendants must adhere to 13 items required by the state including posting a $20,000 appearance bond, wearing an ankle monitor, no contact with their children, and house arrest. The only problem is, their house—which was a stolen RV—was just seized and their compound demolished as part of a mysterious campaign by federal agents.

Following a court order, authorities seized the RV where the five adults are believed to have been abusing 11 children and training them for school shootings.

The compound, on which authorities discovered the remains of a still-unidentified toddler, had stood vacant since the initial raid by Taos county deputies on August 3.

The five accused suspects — Siraj Ibn Wahhaj, 40, Lucas Morton, 40, Jany Leveille, 35, Hujrah Wahhaj, 37, and Subhannah Wahhaj, 35 — were found on a decrepit compound earlier this month with 11 malnourished children dressed in rags. All of the children were emaciated and there was very little food found on the property.

The FBI also discovered the remains of another child who was found in an underground series of tunnels underneath the compound. On top of the severe child abuse discovered at the site, the FBI found evidence that the group was training to carry out acts of terror—specifically school shootings—inside the US.

A report from NBC news showed the before and after photos of the compound after it was ransacked by federal agents. Adding to the mystery behind the destruction, the only thing that appeared to be removed from the property was the RV.

Authorities left behind bullets, personal belongings, and other items—all of which could’ve contained evidence. Now, however, it is destroyed and tainted.

On top of destroying potential evidence at the compound, the prosecution also failed to present enough evidence for the judge to rule in favor of denying the suspects’ bail.

This is despite admitting that a child was killed in their custody while performing some sort of ritual.

As TFTP reported Monday, according to the FBI, Leveille and Siraj Ibn Wahhaj believed that, after the child died, he would be resurrected as “Jesus.” The child would then instruct the other children on “corrupt institutions” they were to attack.

Targets would include schools, he said, as well as law enforcement agencies and financial institutions. Further, Leveille told the kids that targeted individuals who did not accept their beliefs were to be detained until they were converted. Otherwise, they were to be killed, Taylor said the children told him during the interviews, according to Taos News.

The child witnesses also told FBI agents that they were instructed in tactical weapons training to carry out this mass carnage, including speed reloads, tactical reloads, moving and shooting and room clearing. The FBI found books on the property related to this training.

“The evidence as a whole says this family was on a mission, and a violent one,” prosecutor Tim Hassan told the court.

Despite this overwhelming evidence that the FBI claimed to hold, Judge Backus explained that prosecutors failed to mention any of this in court.

As KOB points out, Judge Backus says that the state alleged the defendants were teaching the children to participate in school shootings but provided no evidence to support the claim. She invited the state to provide evidence in a supplemental motion.

This clear mishandling of the case is leading to speculation online that these five suspects may have been assets of the federal government. While this is entirely speculative, the fact that feds destroyed the area on Wednesday only adds fuel to this conspiracy theory fire.