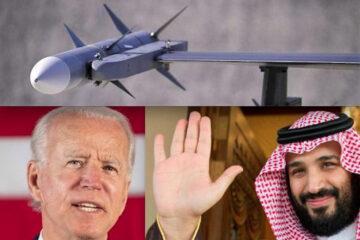 See? Different administration, same shenanigans. President Donald Trump sold to the Saudis, and so is Joe Biden. Aren’t these the same people that allegedly supplied the alleged hijackers on 9/11? Yeah, I know it was an inside job, but I’m merely reminding people of the criminal activities of these people.

Tyler Durden has the story at Zero Hedge.

Despite the prior stated intent by the Biden White House to see an immediate end to the war in Yemen, the administration on Thursday announced that it’s approving a new $650 million sale of air-to-air missiles (AMRAAM) and related equipment to Saudi Arabia.

“The State Department has made a determination approving a possible Foreign Military Sale to the Kingdom of Saudi Arabia of AIM-120C Advanced Medium Range Air-to-Air Missiles (AMRAAM) and related equipment for an estimated cost of $650 million,” a Pentagon statement announced. Specifically it includes up to 280 air-to-air missiles.

What’s been described as the “forgotten war” in Yemen has raged since 2015, with for much of that period the Pentagon providing direct assistance to Saudi-UAE coalition airstrikes against Yemeni Houthi rebels backed by Iran. Prior US involvement in the Saudi-waged war grew increasingly controversial, given the high civilian death toll amid a total estimated death toll of over 130,000 Yemenis.

Further, the United Nations within the past two years has designated the conflict “the world’s worst humanitarian crisis.” Recall that back in February Biden earned bipartisan praise for the following foreign policy “promises”:

In his first major foreign policy address, President Joe Biden on Feb. 4 declared his commitment to “end the war in Yemen,” which he called a “humanitarian and strategic catastrophe.” The president announced that the US would stop assisting all “offensive operations” in that impoverished country and halt all “relevant arms sales” to the Saudi Arabia/UAE-led coalition that is waging war there.

In describing the rationale for the new massive weapons sale to the kingdom, the Thursday Biden administration statement characterized the ‘defensive’ nature of the systems:

We’ve seen an increase in cross-border attacks against Saudi Arabia over the past year. Saudi AIM-120C missiles, deployed from Saudi aircraft, have been instrumental in intercepting these attacks that also US forces at risk and over 70,000 US citizens in the Kingdom at risk.

There have been multiple missile and drone attacks launched out of Yemen over the past year, with the Iran-backed Houthis showing increased sophistication and reach.

Astoundingly, the Pentagon also claimed that the Saudi kingdom is a “force for progress” in the Middle East: “This proposed sale will support US foreign policy and national security of the United States by helping to improve the security of a friendly country that continues to be an important force for political and economic progress in the Middle East,” it said.

So it appears the US administration is now seeking to justify freshly approving the new missile deal by attempting to link it to conditions that would end the war in Yemen. Though there doesn’t seem to be anything Riyadh has firmly or definitively agreed to just yet.

TRENDING: 10 Top Secret Military Bases the Government Doesn’t Want You to Know About

When are we going to remove this criminal and his criminal administration from the White House and prosecute him for his crimes against the People?