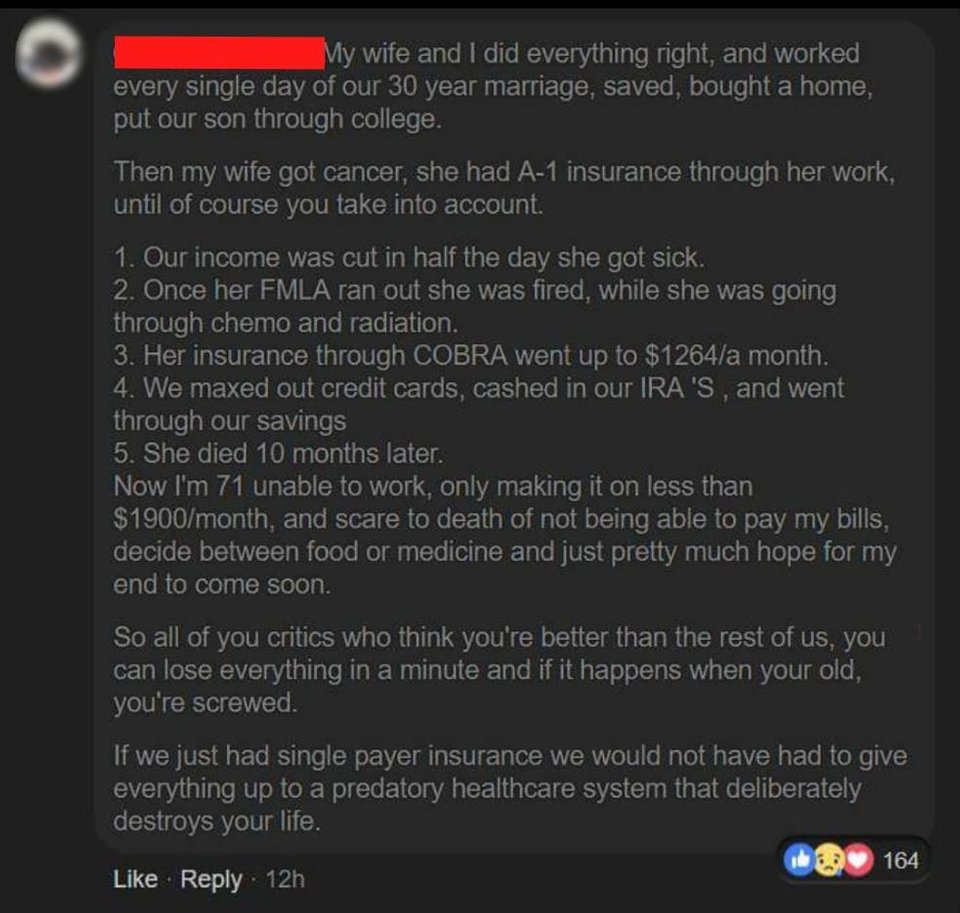 Most Americans are just a single illness away from losing everything. In our country today, medical bills are the number one reason why people go bankrupt, and many of them even had “good health insurance”. As you will see below, even if you have “good health insurance” you can still be stuck with a $100,000 bill for a single hospital stay. Our healthcare system does not work, it is absolutely barbaric, and both political parties have completely dropped the ball. The big health insurance corporations now dominate the entire industry, and they have become masters at finding loopholes that will allow them to wiggle out from having to pay claims. The entire purpose of these companies is to take in as much money as possible and to pay out as little as they can, and in the process millions upon millions of American families are being financially ruined.

Today I would like to share with you what happened to one elderly couple once the wife got cancer. The wife actually had really good health insurance through her work, but that didn’t save them from financial disaster. The following story has been shared all over social media, and it really touched my heart when I read it, and I believe that it will touch yours as well…

Could you imagine having to choose between food or medicine?

Sadly, that is exactly the situation that many elderly Americans find themselves in today.

And it isn’t just elderly Americans that are getting squeezed by this barbaric system. When a 44-year-old history teacher from Austin, Texas named Drew Calver had a heart attack, he was assured by the hospital that they would “accept his insurance”…

The heart attack was a shock for Calver, an avid swimmer who had competed in an Ironman triathlon just five months before.

Despite the surprise, Calver asked from his hospital bed whether his health insurance would cover all of this, a financial worry that accompanies nearly every American hospital stay. He was concerned because St. David’s is out-of-network on his school district health plan. The hospital told him not to worry and that they would accept his insurance, Calver said.

But when he got out of the hospital, the bills started coming, and the hospital claimed that he owed them more than a hundred thousand dollars…

What that hospital is doing is morally wrong. Any hospital that would charge $164,941 for a four-day stay should be immediately shut down and investigated for criminal activity.

You could buy five or six really nice new vehicles or a new home for that amount of money. There is absolutely no justification for a bill that large.

These hospitals get us when we are at our most vulnerable, and they never tell us what things are going to cost up front.

Then later they stick us with absolutely outrageous bills and they expect us to pay.

When confronted about this ridiculous bill, the hospital initially claimed that “we did everything right”…

In a statement, St. David’s HealthCare defended its handling of Calver’s bill and sought to blame the school district and Aetna for offering such a narrow network.

“While we did everything right in this particular situation, the structure of the patient’s insurance plan as a narrow network product placed a large portion of the financial responsibility directly on the patient because our hospital was not in-network,” the hospital said.

But then more media scrutiny came, and the hospital decided that Calver only owed them $782.29…

Shortly after this story by Kaiser Health News and NPR was published and broadcast on Monday, St. David’s said it was now willing to accept $782.29 to resolve the $108,951 balance because Drew Calver qualifies for its “financial assistance discount.” In a statement, the hospital said this offer was contingent on Calver submitting his application for a discount based on his household finances.

I can’t imagine how anyone could possibly defend our current healthcare system, but some people actually do.

They tell us that we have the most expensive healthcare system in the entire world because we are getting the best care.

According to Newsweek, the United States is actually “the most dangerous country in the developed world to give birth”…

The U.S. is the most dangerous country in the developed world to give birth in according to a report.

About 50,000 women are “severely injured” during childbirth, and about 700 women die every year. Half of these deaths could have been prevented, as could the injuries, if correct safety procedures had been followed, according to an investigation by USA Today.

That sure doesn’t sound like “the best care” to me.

Our medical professionals have been trained to offer only two solutions. Either they will cut you open or they will pump you full of drugs.

Sadly, even our children are being pumped full of pharmaceutical drugs these days…

Every time either the Republicans or the Democrats come up with a new plan, it almost always results in health insurance premiums going up and the quality of care going down.

Our healthcare system is a complete and utter disaster. It has devolved into a giant money making scam in which the medical industry systematically sucks the lifeblood out of sick and vulnerable Americans. The bottom line has become king, and most medical professionals are attracted to the industry these days because of how much money they will make.

In the end, the medical industry should be completely and utterly ashamed of themselves for what they are doing to this country.