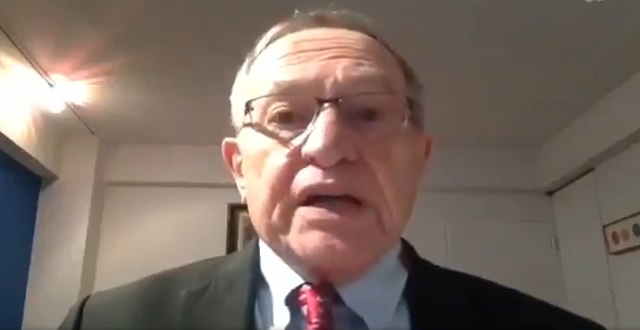 Jeffrey Epstein’s longtime lawyer Alan Dershowitz admitted he got a massage while at Epstein’s house but reportedly said it was from an “old, old Russian woman” and “I kept my underwear on.”

Alan Dershowitz admits to going to child sex trafficker Jeffery Epstein's house for a massage, but would like you to know that he kept his underwear on. pic.twitter.com/Sfj4689wDd

From Crooks and Liars:

Yesterday, Axios’ Jonathan Swan was just floored when Dershowitz told them he did get a massage at Epstein’s residence but it was from a very “old, old Russian woman.”

Swan had the same reaction that we all did which is “What the hell is going on?” It’s insane.

[…] Epstein’s butler testified under oath that Dershowitz was present when underage girls were around, according to court filings.

In an interview via Skype, Dershowitz insisted he never saw an underage girl at Epstein’s house, but was worked on by an older lady. Huh?

“Were there young women in another part of the house giving massages when I wasn’t around? I have no idea of that,” he said.

“I kept my underwear on during the massage,” Dershowitz went on to stammer. “I don’t like massages particularly.”

Dare I say the walls are closing in?

Wow. "'Harvard law professor Alan Dershowitz was around Epstein frequently,' declares Roberts in the filing. “Dershowitz was so comfortable with the sex that was going on that he would even come and chat with Epstein while I was giving oral sex to Epstein.'” https://t.co/Z7U9hlBRvN