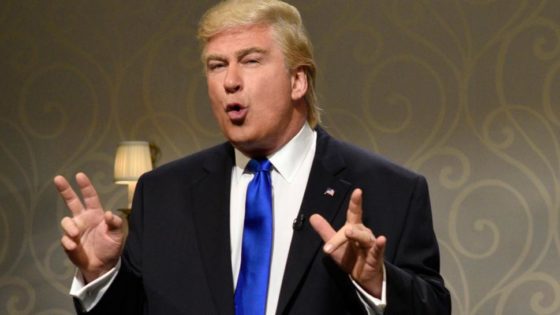 Less than 24 hours after reprising his Emmy Award-winning parody of President Trump on “Saturday Night Live,” Alec Baldwin took aim at the president again, reported Fox News. Baldwin also said that his role as Trump on “SNL” wasn’t supposed to last as long as it has. “‘Just three shows,’ he said,” as Baldwin recalled a moment of his past when “SNL” producer Lorne Michaels tried to convince the actor to portray then-candidate Donald Trump. “‘Till the election,’ he said. ‘Then he’ll be gone,’ he said. ‘Three shows. It will be fun,’ he said.

But Trump’s victory over Hillary Clinton in the 2016 presidential election resulted in an extension of Baldwin’s run on the late-night comedy show which has been extended and included this weekend’s opening sketch about Trump’s recent meeting with rapper Kanye West.

All of this was said moments before Baldwin insisted that through voting for Democrats, “we” should overthrow the government. He then attempted to rally the left-leaning mob of a crowd to vote in next month’s midterm elections, saying “this election and the one that follows in 2020 will be the most consequential elections since the election of FDR.It is time to overthrow the government of Donald Trump — not in a violent way or unlawful way — but it must be overthrown nonetheless.”

Baldwin’s almost 20-minute long speech ended with him saying, “Let’s make America great again by making Donald Trump a casino operator again,” he said. “Every day I wake up, I still am horrified,” Baldwin continued. “I feel like I’m in some dream that Trump is president of the United States. I almost can’t even say it.”

Baldwin has been a long time Democrat who champions for bigger and more freedom trampling government. Baldwin has long been a backer of Democratic candidates and causes and in 2000, he infamously declared that he’d move to Canada if then-Texas Governor George W. Bush won the presidential election. Though Bush did win, Baldwin didn’t move across the northern border.