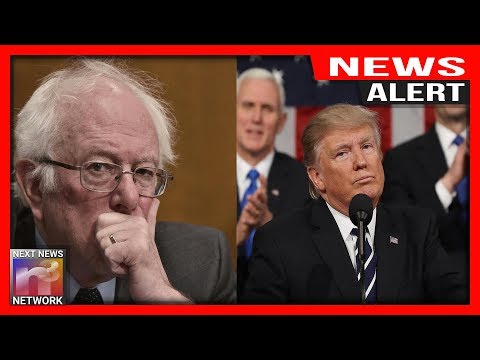 In Bernie Sanders latest attempt to remain relevant, he released an ad that made fun of the 2016 attack on President Trump.

As the Gateway Pundit reminds us, in March 2016 anti-Trump protester Thomas Dimassimo jumped a fence and attacked Donald Trump on stage.

From an old GP article…

New video has been posted with a vantage from the front rows of the Trump campaign rally in Dayton, Ohio Saturday morning of the security incident that prompted Secret Service agents to rush on stage to protect leading Republican presidential candidate Donald Trump.

The anti-Trump protester jumped the fence– The anti-Trump protester was later identified. Authorities in Ohio have identified the man arrested and charged with rushing the stage at a Donald Trump campaign rally.

Here’s Tommy dragging the US flag at a Black Lives Matter rally. His supporters are violent and getting more dangerous every single day.

Did you hear what happened when a bunch of Bernie voters gathered in Portland OR last weekend?

If not we have stories on that here and here.

Bernie Sanders supporters are violent and will stop at nothing to see the America they covet come to fruition. I’m sure the new political ad speaks to them.

Mock assassinations of our President are nothing to joke about.

Stick to the issues and stop inciting violence Bernie.

I’m thinking Sanders will someday “feel the burn” in hell if the man doesn’t change his ways.

Bernie is an old man who carries the same delusional values of the young punks who worship him.