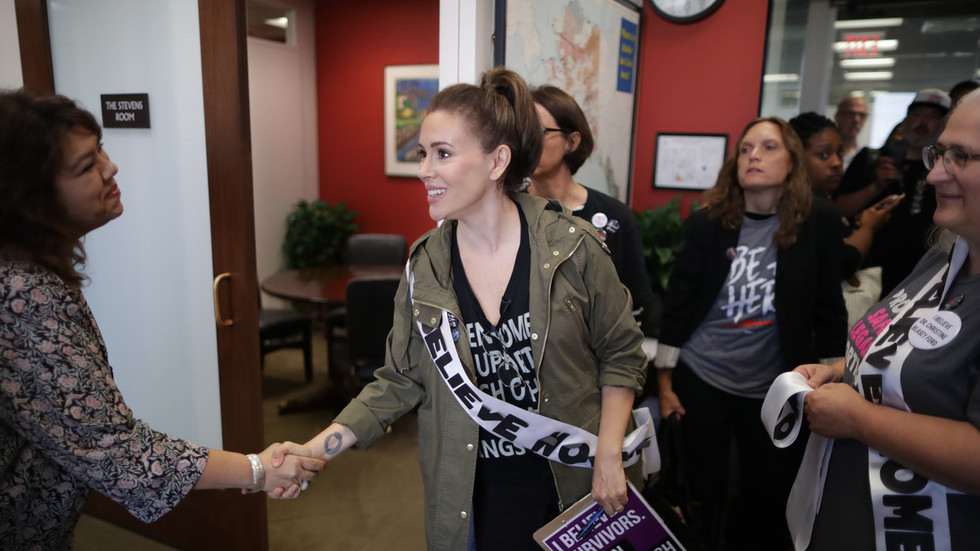 Actress, #MeToo advocate, and all round woke feminist Alyssa Milano has stepped in to defend her “friend” Joe Biden, after accusations of inappropriate touching and groping have mounted against the former vice president.

“I am proud to call Joe Biden a friend. He has been a leader and a champion on fighting violence against women,” Milano tweeted on Monday, adding “that’s who Joe Biden is – a warm, generous individual who believes its on all of us to pay attention to women’s stories and experiences.”

I am proud to call Joe Biden a friend. He has been a leader and a champion on fighting violence against women for many years, and I have been fortunate to accompany him to events with survivors where he has listened to their stories, empathized with them, and comforted them. pic.twitter.com/cI0jsKlu3P

As vice president, Biden spearheaded the ‘It’s On Us’ campaign against sexual assault on college campuses. However, the 76-year-old has also built up quite the highlight reel of his own inappropriate moments; becoming far too familiar and handsy with women and children at Washington events.

Most recently, Biden was accused of unwanted kissing by former Nevada legislator Lucy Flores, who said the former VP planted a “big slow kiss” on the back of her head at a rally in Las Vegas; and Connecticut woman Amy Lappos, who alleges Biden “put his hand around my neck and pulled me in to rub noses with me.”

Biden denies any wrongdoing, saying it was “never” his intention to make anyone feel uncomfortable. Milano, who reinvented herself in recent years as a vocal feminist and founder of the #MeToo movement, agrees.

“I respect Lucy Flores’ decision to share her story and agree with Biden that we all must pay attention to it,” she tweeted. “But, just as we must believe women that decide to come forward, we cannot assume all women’s experiences are the same.”

5. I respect Lucy Flores' decision to share her story and agree with Biden that we all must pay attention to it. But, just as we must believe women that decide to come forward, we cannot assume all women's experiences are the same.

“Believe women, but…” is certainly a change of tune for Milano, who led the crusade against Supreme Court Justice Brett Kavanaugh, last year. Milano said that his confirmation in the face of uncorroborated sexual assault allegations served to “institutionalize sexual violence,” and hashtagged her anti-Kavanaugh tweets“#BelieveWomen.”

Biden has not yet announced a run for the presidency in 2020, but is considered a likely candidate and a frontrunner among a crowded field of Democrats. Although progressive godfather Bernie Sanders remains a favorite among young voters, Biden topped a recent Quinnipiac University poll, with 29 percent of Democrats rating him as their first choice.

With Sanders dangerously close in the polls, a certain few journalists in the mainstream media have stepped in to downplay the accusations against Biden.

"Are we allowed to bring up that Lucy Flores is a huge Bernie person?"https://t.co/haxOS1Wc9a pic.twitter.com/EavN5CvSEt

Is is okay to bring up this could be politically motivated?” MSNBC’s Mika Brzezinski asked on Monday. “Are we allowed to bring up that Lucy Flores is a huge Bernie person? And she has political connections that might be counter to Biden’s goals?”

Brzezinski then laughed off Biden’s wandering hands, describing her “friend” as “extremely affectionate, extremely flirtatious in a completely safe way.”

Still, others are more puzzled. Fox News host Tucker Carlson asked former Clinton Adviser Richard Goodstein “have you ever sniffed a stranger’s hair? What is that?” Even liberal late-night comedian Stephen Colbert piled on Biden. “Generally, the only people who come up from behind, put their arms around you, smell your hair and kiss your head are dead husbands teaching you pottery,” he jibed.

OMG, Tucker: “Have you ever sniffed a stranger’s hair?”😂#SpicyTucker pic.twitter.com/MU7vhDNc0U