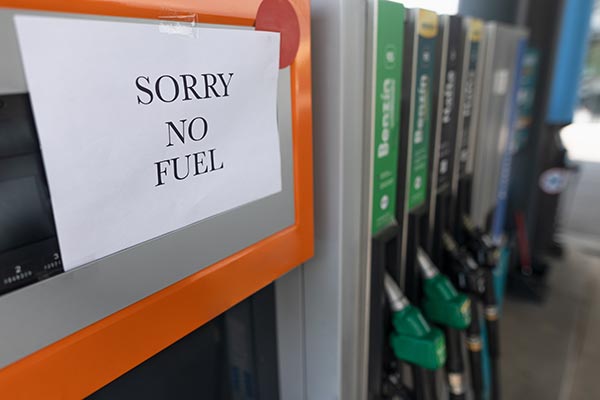 (Natural News) The United States has less than a month’s supply of diesel fuel remaining, with some estimates suggesting the country only has 25 days or less of diesel – the lowest America’s diesel supply has been since 2008.

This is according to data taken from the Energy Information Administration, the federal government’s main body for collecting information regarding American energy. (Related: America’s diesel inventory now stands at LESS THAN ONE MONTH thanks to Biden’s disastrous policies.)

The latest diesel crunch comes just as retail prices for diesel have been steadily climbing for more than two weeks after decreasing and remaining relatively stable in the last few months. The current national average price of a gallon of diesel is $5.309, according to AAA. This was nearly 50 percent higher than its price last year, which was $3.617 per gallon.

In New England, where more people burn fuel for heating than anywhere else in the country, diesel stockpiles are currently less than a third of typical levels for this time of year.

Diesel stockpiles going low is not uncommon for this season as refiners dial down production for maintenance. But the maintenance season, coupled with the disappearance of Russian oil products following Western sanctions imposed upon it for its special military operation in Ukraine, have combined to tighten global supplies and limit imports from other oil-producing nations.

Matters are being made worse because demand for diesel for cars and for heating homes will rise as winter approaches and will likely cause prices to increase even further.

Biden more worried about how this problem will affect midterm elections

The White House has remained relatively silent on the issue. National Economic Council Director Brian Deese said in an interview with Bloomberg TV that current diesel inventories are “unacceptably low,” and that the Biden administration has put “all options … on the table” to build supplies back up and reduce retail prices.

Joe Hoft, writing for Gateway Pundit, believes that the administration is attempting to keep the news about diesel supply crunch from hitting the mainstream “because it’s a political timebomb waiting to go off, especially as the midterm elections are so close.”

Chunzi Xu, writing for Bloomberg, noted that the diesel crunch comes at the most inopportune time for Joe Biden and the Democrats, as the midterm elections are just days away and this problem has the potential to drive prices up even further for consumers who already view the inflation crisis and the weakening economy as their top voting issues.

Some of these potential solutions thrown around by members of the Biden administration include limiting fuel exports to lower consumer prices. Unfortunately, according to Patrick De Haan, head of petroleum analysis for GasBuddy, there isn’t much Biden can personally do to alleviate prices quickly.

“Perhaps waiving the Jones Act, which would widen the fleet of available vessels to ship diesel from Gulf Coast refiners to the Northeast, or raise incentives for refiners to repair or restore any idle capacity,” said De Haan. “But they have plenty of incentive right now with diesel commanding high selling prices.”

This video is from the channel World Alternative Media on Brighteon.com.

Angry Biden set to tank domestic energy production after OPEC+ tells him to take a hike over request to boost production.

Biden and the globalists will destroy the oil industry and collapse the American energy grid.