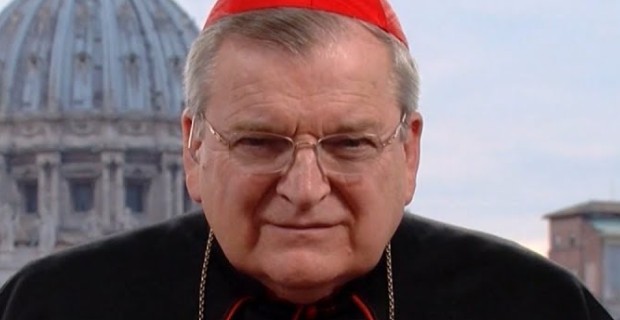 The remarks were made at the Roman Life Forum earlier this month.

Burke said that Islam “by its definition believes itself to be destined to rule the world” and that many Muslims move to European countries because they are “opportunists”.

The Cardinal was asked “Should a politician who opposes large-scale Muslim immigration be refused a papal blessing?”

Burke replied, “I think the fundamental question here is [whether] someone who resists large-scale Muslim immigration [is] committing an immoral act and therefore should be, let’s say, denied Holy Communion or in some way recognized as a public sinner?”

“To resist large-scale Muslim immigration, in my judgment, is to be responsible in the sense of making sure that those who are immigrating to the country – remember that the definition of the Church’s teaching is that the individuals are not able to find a way of living in their own country and this is not true of immigrants who come who are opportunists, and in particular in the case of Islam, which by its definition believes itself to be destined to rule the world — coming in large numbers to countries,” said Burke, adding, “You don’t have to be a rocket scientist to see what’s happened.”

Pointing to the existence of Islamic no-go zones where “Muslim immigrants have set up their own legal order,” Burke said opposing the spread of this is patriotic.

“And so, to be opposed to wholesale, or large-scale Muslim immigration is, in fact, as far as I’m concerned, the responsible exercise of one’s patriotism in the sense that we — yes, people are true refugees who can’t live in their own country we must receive them and help them in every way. But this is not the case when you have simply a large-scale immigration,” he said.

The Cardinal’s comments are completely at odds with those made by Pope Francis, who has repeatedly urged European governments to take more Muslim migrants.

His rhetoric is much closer to comments made by Cardinal Robert Sarah, who said, “It is a false exegesis to use the word of God to promote migration.”

Sarah also said that Europe was dying because people had stopped having children and had lost its sense of origin.

“I’m afraid that the West will die,” said Sarah, adding that it was being invaded by other cultures that would soon dominate.