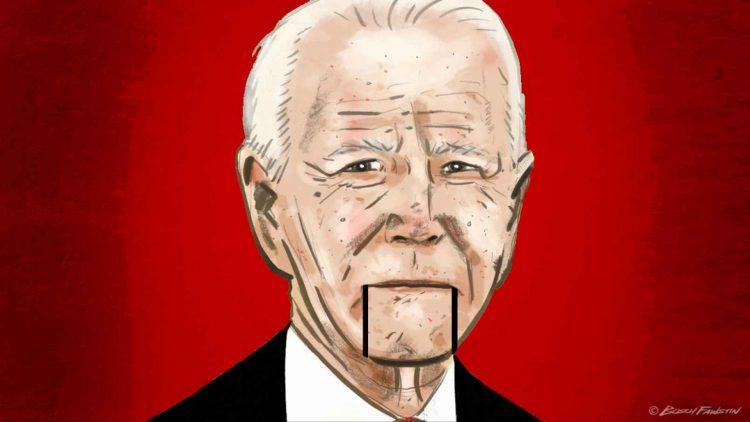 The plan was simple. Saturate the media with polls showing a blue wave and an inevitable victory. Discourage people from voting in person. And then, after tabulating the paltry votes of those who defied the media to vote in person, dump all the tampered, altered, and harvested ballots for Biden in key cities.

Even before Election Day, the Democrats knew their plan was going awry. Suddenly, instead of urging their base to use mail-in ballots they were, just as loudly, telling them to vote in person.

Why? Too few Republicans were voting by mail and too many were going to vote in person.

If the Election Day numbers tilted too decisively to President Trump before suddenly going Biden’s way, the election would look rigged, and there would be an outcry from Republicans.

Despite last-minute efforts urging Democrats to vote in person, that’s exactly what happened.

Once again, Democrats had overreached, committed a massive crime, and have been left with no choice except to ride the tiger. That’s what happened last time when the Obama administration allied with the Clinton campaign to eavesdrop on its political opponents. And then doubled down with investigations and indictments, not of the perpetrators, but the victims.

Despite the blatant irregularities in key battleground states, they’re doubling down again.

The American Coup is underway. In classic Leninist fashion, its initial goal is to control the propaganda and the process. The media has declared Biden to be the winner while mass celebratory gatherings cheer the new order. Big Tech censors any skepticism about the election.

And the same faction that declared four years ago that casting doubt on an election was patriotic and the best defense of democracy now claims exactly it’s treason.

The only Democrat rule is that it’s patriotic when they do it and treason when their opponents do. That’s not how ‘democrats think. It’s how dictators rule.

All of this is a sideshow. What really matters is the process, not the propaganda. The propaganda is meant to divert attention from how implausible the media’s numbers are.

Republican turnout rose, instead of falling, in in-person voting, and the GOP also went into Election Day with clear leads in mail-in ballots in key battleground states, including Wisconsin and Michigan. The tide of Biden ballots that arrived during the night resulted in implausible turnout figures. The photos, videos, and whistleblower accounts of poll and postal workers tampering with ballots didn’t take long to show up. And just as quickly to be censored.

The odd numbers mostly came out of urban areas run by notoriously corrupt political machines. And the race between those trying to steal and unsteal the election began with a power struggle. In Philly and Detroit, efforts were made to keep Republican observers out of view.

In Philly, it took a court order to even get the observers within sight of the ballots, while the city continued to fight the ruling. In Detroit, windows were covered up with cardboard, and Republican observers were locked out. Potentially tens of thousands of ballots were illegally transposed with no Republican observers. In Pennsylvania, Democrat operatives had been illegally given access to rejected mail-in ballots so that they could arrange for provisionals. And back in Detroit, workers were told to backdate ballots that had arrived after the election.

In Wisconsin, thousands of witness statements may have been illegally altered.

Meanwhile, the glitches, errors, and irregularities began piling up.

In Antrim County, Michigan, a “glitch” turned over a county that President Trump had won to Joe Biden. The glitch was only noticed because the results didn’t match past trends. More than half of the state’s counties use the same software.

“Just last night in Oakland County, we found 2,000 ballots that had been given to Democrats, that were Republican ballots, due to a clerical error,” RNC Chair Ronna McDaniel announced at a press conference.

Oakland had been one of three counties that were crucial to the state being called for Biden.

And then there were the voting dead who went on voting and being registered after death. That allegedly included a woman who voted a week after she died.

The voting dead are not a new problem in Philly. If the dead didn’t vote, few elections would go on as usual. And yet the same media that spent four years falsely claiming that Russians had somehow rigged the previous election with a few thousand dollars in Facebook ads, have declared that accusing the incorruptible City of Brotherly Love of corruption is an outrage.

It’s no coincidence that the areas at the center of the vote fraud controversy, Philly, Detroit, and Atlanta, are also some of the most corrupt cities in the country with plenty of jailed officials.

All of them Democrats.

It wasn’t that long ago that four election officials were charged with fraud in Philly for adding votes to a machine. Three years earlier, Philly came to the nation’s attention when it was noticed that 59 city precincts hadn’t registered a single vote for Mitt Romney.

Just three years ago, an elderly couple testified that they were prevented from voting in Philly because they were Republicans.

“When an Election Board worker heard they wanted to vote Republican, a witness heard him bellow: “Not on my machine!” The Philadelphia Inquirer reported.

This year, Michael “Ozzie” Myers, a former Philly Congressman, was charged by the Department of Justice with “fraudulently stuffing the ballot boxes for specific candidates in the 2014, 2015, and 2016 primary elections, bribery of an election official, falsification of records, voting more than once in federal elections, and obstruction of justice.”

In 1994, the fraud in one Philly election was so bad that a federal judge ruled that a Democrat State Senator had to be replaced by a Republican shifting control of the Pennsylvania Senate.

The New York Times, at the time noted that “Democratic campaign workers forged absentee ballots. On many of the ballots, they used the names of people who were living in Puerto Rico or serving time in prison, and in one case, the voter had been dead for some time.”

In, what ought to be a familiar story, “the two Democrats on the three-member board of elections, an elected body, testified that they were aware of the voter fraud, had intentionally failed to enforce the election law and had later tried to conceal their activities by hurriedly certifying the Democratic candidate as the winner.”

The question isn’t whether there’s fraud in Philly elections. The only question is how much.

When Democrats and their media operatives deny the obvious, anyone from Philly, from Detroit, and from cities run by their corrupt political machines can only laugh into his mandatory mask.

The only way this was a fair election is if there was no voter fraud in Philly.

And does anyone really believe that?

That’s the difference between political corruption and an oligarchy.

This was not an election. It was a coup.

This was not just voter fraud out of Philly. It’s a coup by the San Francisco oligarchy.

The weeping cable news anchors, and the ruthless suppression of dissent by Facebook, Twitter, and Google, are how fake elections are conducted in totalitarian dictatorships. It’s un-American.

This was not just a coup against President Trump and the 70 million who voted for him.

It’s a coup against America.