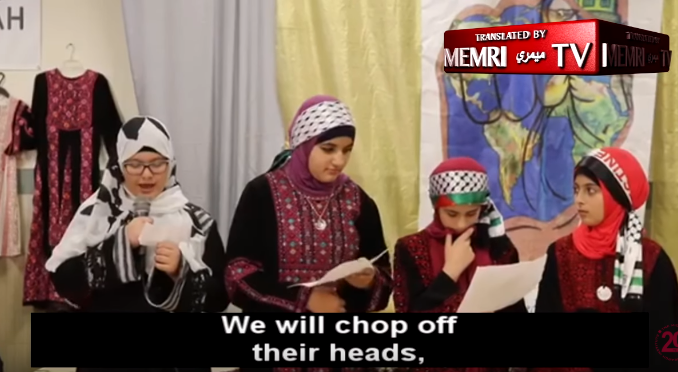 Editor’s Note: As much as we stress about Muslim immigration, it is important to realize that the enemy is already here, and the Muslim population of America is growing. -Dean Garrison

And those in power in America continually tell you that Islam is the religion of peace. It’s a religion of pieces death cult born of a demonically possessed, murdering, thieving pedophile named Muhammed. now, it’s blatantly in your face America. New video footage showing Muslim children from a Philadelphia Islamic center stating that they will kill in the “army of Allah,” including chopping off the heads of the enemies of Allah.

“These are not isolated incidents; they are happening in major centers of the country – including in Pennsylvania,” MEMRI said in a statement to Fox News.

In the video, translated by MEMRI, kids can be heard singing: “The land of the Prophet Muhammad’s Night Journey is calling us. Our Palestine must return to us.”

One girl talks about martyrs sacrificing their lives without hesitation to conquer Jerusalem.

“We will defend the land of divine guidance with our bodies, and we will sacrifice our souls without hesitation,” a second girl says. “We will chop off their heads, and we will liberate the sorrowful and exalted Al-Aqsa Mosque. We will lead the army of Allah fulfilling His promise, and we will subject them to eternal torture.”

MAS Philly belongs to the Muslim American Society (MAS), which has 42 chapters in the United States and one in the United Kingdom.

MAS’ website says that its mission is to “move people to strive for God-consciousness, liberty and justice, and to convey Islam with utmost clarity,” and that its vision is “a virtuous and just American society.”

Of course, the subversive MAS wants people to think that they are compassionate towards the infidels, including Jews and Christians. Just check our the latest statement from MAS on the San Diego synagogue shooting.

Muslim American Society condemns the terrorist attack that targeted a synagogue in San Diego. As worshipers observed the last day of Passover, a 19-year old white male started targeting and shooting members of the synagogue. This person is the same individual who attacked a mosque in Escondido, 9 miles away from the Chabad Synagogue of Poway. One person is dead and three are wounded, including the Rabbi.

“Hate has no place in our society. In an era where we’ve seen an increase in hate crimes, including rising Islamophobia and anti-semitism, we must stand tall together in solidarity.” said Ayman Hammous, Executive Director of MAS, “these acts of terror in places of worship and against humanity cannot become the norm.”

MAS strongly condemns this white supremacist attack and we call on our leaders to call this out for what it is, an act of terror meant to terrorize a faith community. Places of worship are sacred and human life is sacred. The Muslim community has faced acts of hate numerous times and we stand tall with the Jewish community who also faced similar acts of hate one too many times. “We know that our faith communities are resilient. We will bounce back stronger together,” says Ismahan Abdullahi, National Deputy Director of MAS PACE,
“Hate is scared of love, for it’s the only thing strong enough to keep it at bay. This world can and must do better.”

Our thoughts and prayers are with the Jewish community in Poway. We offer our sincerest condolences to all the families impacted by this tragedy. We urge all faith communities and centers to be vigilant and take extra precautions. Together, we will stand tall against hate.

Liars! How in the world can you promote the degenerate teachings of Islam, teach your children to chop the heads off the infidels, teach them the hate that comes with this “religion,” which is nothing more than a totalitarian political movement? The answer is, you can’t.

America, you’ve been warned. If you continue to put your head in the sand, these people are going to eventually saw it off. They and their children are telling you now that is what they have in store for you.

God’s judgments could not be more clear (Deuteronomy 28; Leviticus 26). It’s time God’s people repent and turn back the hand of God’s judgment through that repentance and pleading for His mercy and forgiveness for the sins we’ve committed against our Creator.