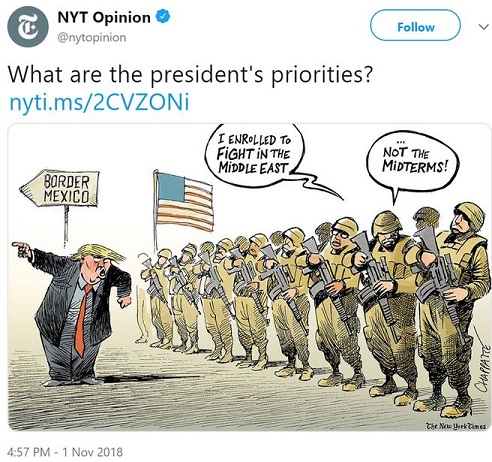 Americans already distrust the mainstream media (MSM). A January 16, 2018 Gallup Poll found that distrust of the news media has soared in recent decades, from 25% of U.S. adults in 1989 to 45% today saying there was a great deal of political bias in news coverage. 66% of Americans say that news media “do not do a good job” of “separating fact from opinion” (86% of Republicans; 44% of Democrats).

With the lawful election of Donald Trump to the presidency, the MSM have gone insane with vitriol and hate, showing that they really are the Hate America Media (HAM).

Here’s an example: a cartoon by New York Times editorial cartoonist Patrick Chappette, portraying U.S. soldiers’ mission as that of fighting Israel’s wars in the Middle East, and the soldiers refusing to defend America’s southern border against the impending invasion of thousands of “caravan migrants”.

No longer covert and sneaky, the Hate America Media have abandoned all pretenses at journalistic objectivity. An example of the HAM’s declaration of open warfare against Trump and his millions of “deplorable” supporters is the editorial board of the New York Times urging Democrats to go to war against a sitting President of the United States by deploying violent and unscrupulous “Godfather” mafia tactics.

Now, the American people are fighting back against the Hate America Media with open hostility, threats, and even physical attacks.

The RTDNA has begun compiling anti-press incidents that it self-righteously calls the “press freedom tracker”. Last year, the first time a count was kept, there were 48 incidents; the count so far this year is 39, including:

Some journalists are quitting because of the hostility. The hostility she’s felt from the public recently was one of the reasons why Los Angeles KNBC-TV news photographer Lori Bentley-Law decided to quit the business after 24 years.

In her blog post explaining why she was leaving, like other journalists such as Acosta who are devoid of introspection, Bentley-Law blames public hostility entirely on President Trump, as if his supporters are brain-dead zombies who can’t and don’t think on their own. She whined that when a president describes the press as enemies of the people, “attitudes shift and the field crews get the brunt of the abuse. And it’s not just from one side. We get it all the way around, pretty much on a daily basis.”