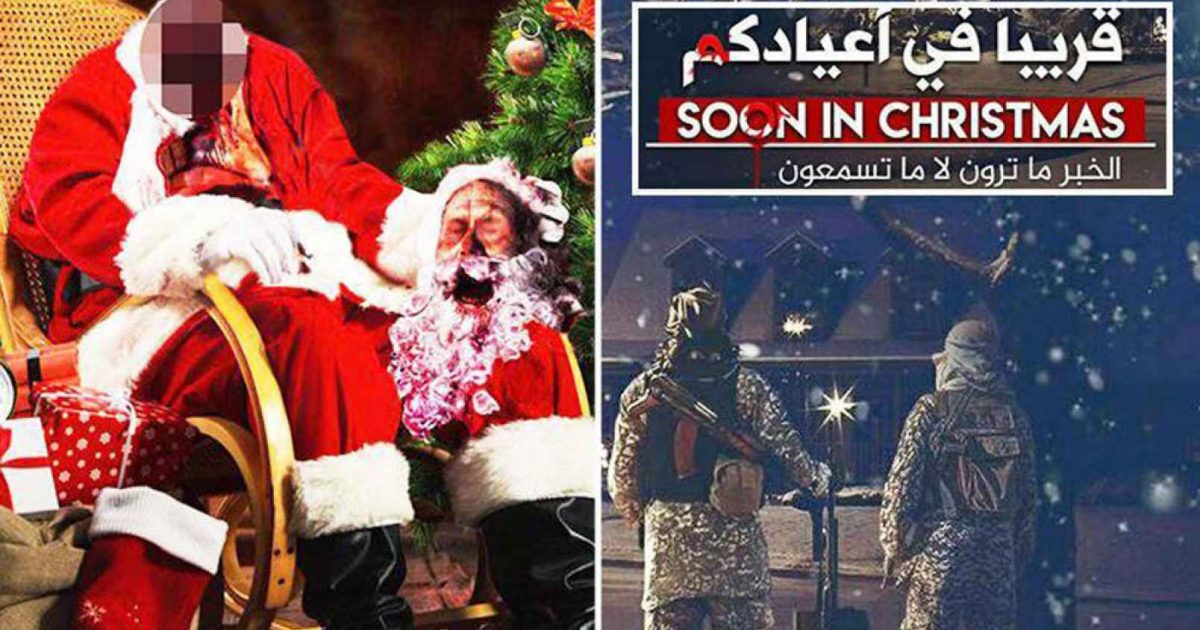 Shortly after the jihad massacre at a Christmas market in Strasbourg on December 11, Muslims who support the Islamic State (ISIS) told each other to “rejoice” and “give good news,” and threatened more Christmas carnage. And so Christians in the West increasingly experience what their brethren in Muslim countries have known for centuries: another haunted Christmas.

ISIS jihadis posted an image of Santa Claus kneeling, as if awaiting beheading, beside a masked jihadi, next to a cross through which a sword has been thrust, and which is gushing blood. The caption: “Do not leave your home because we are thirsty for your blood.”

Christians in so many countries know that very well.

Benedict Kiely Real Clear Politics reported last Tuesday that Christians in Iraq face a new threat from “Popular Mobilization Units,” who in the town of Karamles, near Mosul, recently blocked a road that led to a church, preventing the congregation from going to the church, and “also strafed the church with gunfire.” Kiely added that the local priest “told me that this was the second time his church had been attacked in the last nine months. One of the militiamen held a handgun to the priest’s face when he went out to demand that they clear the street and stop shooting.” Said the Iraqi priest of the Shi’ite jihadis: “They are the new ISIS. We are really vulnerable.”

According to Fox News, “In Iraq, the Christian population has decreased from 1.5 million in 2003 to fewer than 200,000 today. Much of this was the result of ISIS’ merciless reign of terror, which was buoyed by Western inaction in 2014.”

The Christian website World Watch Monitor reported in early December that “over 100 Christians have been arrested in Iran in the past week and nearly 150 in the past month, as part of the government’s attempt to ‘warn’ Christians against proselytizing over Christmas.” These arrests could have fatal consequences: Lela Gilbert, a journalist who tracks the persecution of Christians, noted in the Jerusalem Post on the Saturday before Christmas that “in 2017, there were at least 517 executions in Iran.”

In Nigeria, meanwhile, according to Christian Today, “Nigeria’s president gave only a weak nod to the Christian communities being devastated by brutal attacks in his Christmas message to the nation. Despite thousands being killed by Boko Haram and Fulani herdsmen in recent years, President Muhammadu Buhari played down the violence as he called on Nigerians to rebuild community relationships….The Christmas message is unlikely to appease Nigeria’s Christian leaders who accuse the authorities of turning a blind eye to the violent attacks being carried out on their communities.”

Likewise in Pakistan, Prime Minister Imran Khan wrote on Twitter: “Wishing all our Christian citizens a happy and peaceful Christmas.” Khan said nothing about Asia Bibi, the Christian woman who was on death row for eight years for “blasphemy” against Muhammad, only to be acquitted by the Pakistani Supreme Court and yet still not freed, for if she were, she would certainly be killed by Muslims who have been baying for her blood and hunting for her house-to-house.

Nor did Khan say anything about the many, many other Christians whose lives have been destroyed by Pakistan’s blasphemy laws, including Qaisar and Amoon Ayub, who were sentenced to death for blasphemy in mid-December.

Then there’s Egypt, where the joy of the anticipation of Christmas was somewhat soured on December 10, when Muslim mobs screaming Allahu akbar “waged attacks against the houses of the Copts in the village of Kom al-Raheb, pelting them with stones and thumping at doors and windows.” What was the Christians’ crime? The Muslims “were livid that the Copts had a day earlier, Sunday 9 December, opened a new church building and celebrated Holy Mass inside.” Authorities sided with the attackers: “The police arrived and demanded immediate closure of the unlicensed church.”

Why was the church unlicensed? In Egypt, as in many other majority-Muslim countries, it is nigh impossible for Christians to get the necessary permits to build new churches. The ultimate reason for this is that Islamic law forbids Christians under the hegemony of Islam to build new houses of worship: “The subject peoples…are forbidden to build new churches.” (Reliance of the Traveller, o11.5). In Muslim countries where Islamic law is not in full force today but remains a cultural hangover, such as Egypt, this often takes the form of endless bureaucratic red tape that it is impossible to cut through. So all too often the Christians build the church anyway, only to have it menaced, or demolished outright, by a slavering Muslim mob.

In some areas, the demolishing of a church is the least of the Christians’ worries. All over the Islamic world, Christians know that some Muslims are thirsty for their blood. This is nothing new; indeed, it is a grimly recurring feature of the 1,400-year history of jihad

. Western leaders, however, for the most part, continue to pretend that all is well, and that their policies of mass Muslim migration pose no threat to Christians or anyone else. Before too long it will be painfully, bloodily obvious how wrong they were, but by then it will likely be far too late.