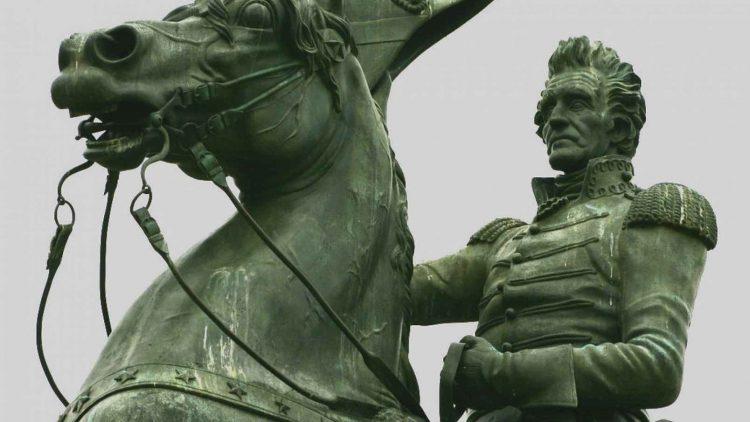 The far-Left rioters who attempted to topple the statue of Andrew Jackson in Washington, DC’s Lafayette Square several weeks almost certainly know nothing whatsoever about him. What they were told in the Antifa indoctrination camps that are called higher education these days is that he was largely responsible for the forcible exile of Native Americans from the Eastern United States, the Trail of Tears, and is thus to be reviled and hated forever. What they were not told is something that may have made them hate him even more: Andrew Jackson was responsible for destroying the first deep state cabal of shadowy, unelected powerbrokers in American history.

As Rating America’s Presidents: An America-First Look at Who Is Best, Who Is Overrated, and Who Was An Absolute Disaster explains, President Jackson took on that cabal, which centered around the Bank of the United States, because of its unaccountability and influence over the electoral process. The Bank was a private corporation that kept the public treasury; its advocates contended that it was necessary to put the nation’s finances in order; its foes, the foremost of whom was Jackson, argued that it was an unconstitutional power grab by the federal government. It was dangerous, then as now, to turn power over the public funds to an oligarchy of private financiers; the possibility for corruption, and for a de facto second government developed by buying favors until large enough to challenge the government of the United States, was immense.

Jackson called the Bank of the United States a “monster,” and denounced its “power and corruption.” He charged it with interfering in the political process and bribing elected officials and journalists with “loans” so that they would do its bidding. There was ample evidence for this. The New York Courier and Enquirer, which up until the 1832 election had opposed the Bank, received a substantial loan from it and suddenly became a vocal supporter of rechartering the Bank. The pro-Jackson Washington Globe accused pro-Bank senators George Poindexter of Mississippi and Josiah Johnston of Louisiana of accepting enormous bribes in return for their support of the Bank, and indeed, Poindexter had received from the Bank a $10,000 loan ($300,000 today) and Johnston one of $36,000 (over $1 million today). These were by no means the only loans the Bank gave to politicians.

Jackson warned that if the Bank, a “mere monied corporation,” could use its money to buy politicians, “then nothing remains of our boasted freedom except the skin of the immolated victim.” He told his close friend and advisor Martin Van Buren: “The Bank, Mr. Van Buren, is trying to kill me, but I will kill it!”

He did. The Bank’s charter, the document that gave it the United States government’s permission to exist, didn’t expire until 1836, but in early 1832, the president of the Bank, Nicholas Biddle, applied for a new charter. His sole reason for doing this was to force Jackson to refuse to recharter the Bank; Biddle assumed that Jackson’s opposition to the Bank would be unpopular and lead to his defeat in the upcoming election, and so he wanted to make sure the president committed publicly to this opposition during the campaign season.

Jackson duly vetoed a bill for rechartering the Bank in July 1832, whereupon Biddle poured massive amounts of money into the campaign of Jackson’s opponent, Henry Clay. Clay campaigned on the issue of the Bank, but this issue did not prove as popular as he and Biddle had hoped. The American people saw Jackson as their champion against moneyed interests that were corrupting the body politic. Clay was resoundingly defeated, with 49 electoral votes against Jackson’s 219.

Rating America’s Presidents shows history in the process of repeating itself. Today, President Trump is, like Jackson, facing a coterie of secretive and unaccountable forces that hold undue sway over the course of American domestic and foreign policy. As in Jackson’s war against the Bank of the United States, Trump must destroy these forces, or they will destroy him – and in this case, likely take the nation down as well. Just as in 1832, these powerful forces are hoping by means of a presidential election to restore and cement their hegemony. The future of America as a free society, in which officials are accountable to the people, hangs in the balance.