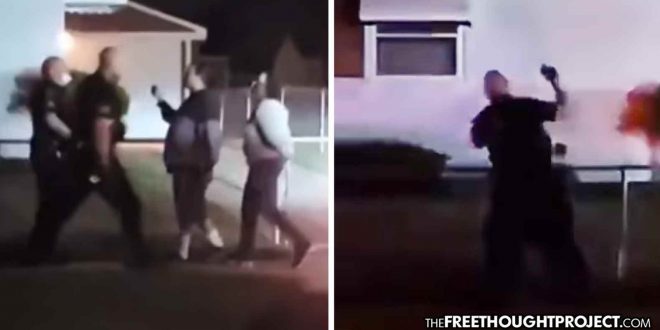 Detroit, MI — Protests are quite literally popping up from coast to coast over multiple instances of police brutality and the subsequent lack of charges faced by the aggressors. While the case of George Floyd is getting the attention it deserves, protests in other parts of the country are still happening in spite of the lack of media coverage.

The following incident unfolded early Tuesday morning, the day after cops choked the life from George Floyd’s body. Daniyal Grady El and his wife Sha’tenia were practicing their constitutionally protected right to film the police when all of the sudden, a cop began punching Sha’tenia multiple times.

Police were reportedly responding to a shooting in the area. Police say they were called to the scene on reports that 30 people were arguing and shots had been fired. Upon arrival, the responding deputies found a 34-year-old female gunshot victim who required medical attention and several bystanders, prompting a call to other police agencies for assistance.

Daniyal Grady El and his wife Sha’tenia live two doors down from where the alleged shooting took place and so they walked over there to film it. When officers asked the couple to get back, they claim the couple refused. However, as the video below shows, the couple — though they were verbally protesting — was not walking toward the officers when one of them began attacking the woman. In fact, the couple was backing up.

When Dan Grady El tried to stop the officer from beating the hell out of his wife, another officer shot him with the taser and began beating him.

“What man can watch another man hit their wife,” Grady El said.

For attempting to film the police, the couple was then beaten, tasered and arrested.

According to the Associated Press, Washtenaw County Sheriff Jerry Clayton said several officers involved in the incident had been placed on administrative leave, including the one seen on the video punching the woman, and an internal investigation is underway.

“There is absolutely no doubt, and no argument from me, that the images in the video are disturbing,” Clayton said. “It warrants a complete investigation.”

Indeed it does. For a cop to go off on a woman like that, he deserves to be fired and charged, especially considering the fact that she appeared to be backing up before he attacked her. As a result, multiple protests have taken place this week outside the sheriff’s department headquarters, chanting such things as “no justice, no peace.”

“We cannot continue to allow this,” said Trische’ Duckworth, a protest organizer with the nonprofit Survivors Speak.

Frequent readers of the Free Thought Project know that filming the cops is not a crime. Despite this being a widely known concept — held up with multiple court precedents — cops continue to violate the First Amendment protected right of citizens to film the police.

Instead of simply allowing a person to film without trampling their rights, in case after case, we see cops assault, arrest, and even threaten to kill people for filming them.

The bottom line here is this: much of America’s law enforcement have never liked public accountability and have consistently objected to laws that make it easier to hold them accountable. From keeping body camera footage secret to passing ordinances to arrest those who film, cops will do everything in their power to make sure you can’t see what they don’t want you to see — even if it takes place in public spaces and directly affects you.

Imagine what would have happened if the folks filming George Floyd’s arrest and murder would’ve been arrested and beaten. We may never have known the real story behind his death.

As TFTP has reported, it has been clearly established that all Americans have the right to record the police. For an officer of the law to remain willingly ignorant of this precedent is at best, dereliction of duty, and at worst, unlawful deprivation of rights. Either way, these cops were in the wrong.

When police refuse to have their public service documented and this refusal morphs into kidnapping and assault, something has gone seriously wrong. No one should ever face persecution for their first amendment rights—especially in the land of the free.